Kežmarok - Hradisko - Levoča - Spišské Podhradie - Spišské Vlachy (66 km); Spišské Vlachy - Spišská Nová Ves - Hrabušice (48 km)
FROM the Loire to the Danube, castles are the focal points of many of Europe's great bike routes. To see a castle by bike is to arrive like a king in a horse-drawn carriage: The view slowly unfolds in front of you. A bike will give you an appreciation for a great edifice in a way no car can emulate. This is certainly the case at Spišský hrad (Spiš Castle). 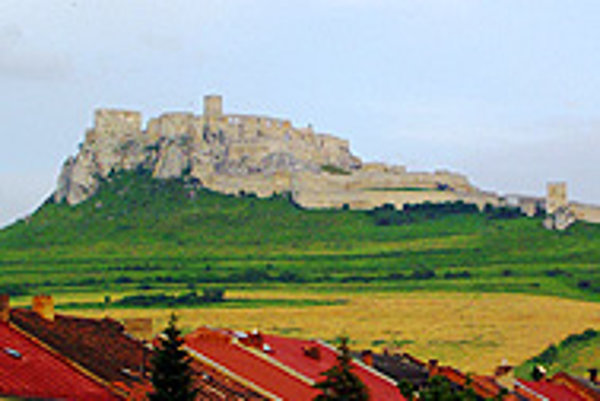 FROM the Loire to the Danube, castles are the focal points of many of Europe's great bike routes. To see a castle by bike is to arrive like a king in a horse-drawn carriage: The view slowly unfolds in front of you. A bike will give you an appreciation for a great edifice in a way no car can emulate. This is certainly the case at Spišský hrad (Spiš Castle).

A UNESCO World Heritage Site, Spišský hrad is the largest castle in Slovakia and one of the biggest in Europe. Its ruins are so magical that film director Rob Cohen made them the centerpiece of his medieval fantasy-adventure flick, Dragonheart (1996). Spiš is also a region endowed with photogenic towns and surrounded by several national parks: The High Tatras, Slovenský Raj (Slovak Paradise), and Pieniny.

I travelled across the region on the Spiš cycle route. The route not only goes through many historical towns, but also past mountains and bucolic country scenery. Here you can meet a horse-drawn wagon on the road, or see local residents raking hay and building hay stacks. A land of enchantment - that is Spiš.

My trip around the region started in Poprad, where I arrived from Bratislava in four hours, together with my bike, via the Kriváň Express train. From Poprad, I rode for 30 minutes along a busy state road, often without a wide shoulder, to Kežmarok, the starting point of the Spiš cycle route's northern branch.

A medieval town originally settled by Germans, Kežmarok features a castle and numerous old burghers' houses. During the summer, it hosts a lively arts and crafts festival in the main square, and is teeming with tourists. No wonder - Tatranská Lomnica, the gateway to the eastern part of the High Tatras, is only 15 kilometres from here.

"We stopped here on our bike ride around the Tatras," explained one Polish tourist from Krakow, "it's a wonderful place to have lunch and furthermore, many people understand us." He was right. Gorals, an ethnic group living north of Kežmarok, speak a dialect that resembles both the Slovak and Polish languages.

From here, I cycled in the direction of Ľubica to the mountain settlement of Hradisko. The road was paved, but not in great shape. It was also straight up. Little villages gave way to thick forests and meadows with grazing cattle and the occasional lone haystack.

Above Hradisko, the pavement ended and I continued on a dirt road. Soon, a vast vista opened up in front of me.

I could see not only the outlines of Slovenský Raj and the Levočské vrchy hills in the distance, but also some big clouds closing in. After I reached the crest, the route descended to Levoča.

An impressive former regional center, Levoča is filled with predominately Renaissance buildings. I entered the main square through the walls of the town's fortifications. The Kostol Svätého Jakuba (St James' Church) here boasts the highest wooden gothic altar in the world, and is Slovakia's second largest gothic church, dating back to around 1400.

From Levoča, the cycle route leads across Levočská dolina valley through the villages of Nižné and Vyšné Repaše further east. Because the weather stopped cooperating, however, I chose a shortcut: the state road to Spišské Podhradie.

Although busy, the road had a wide shoulder, making it suitable for cycling. In the distance and under dark clouds, I caught my first glimpse of Spišský hrad. Founded by Hungarian kings in 1209, the castle was occupied up until 1780, when it burned down. Open daily, the castle contains several restored interior spaces filled with artifacts, including torture instruments in the dungeon. But the highlight of the place is definitely its impressive exterior ruins.

Before calling it quits for the day, I stopped at Spišská Kapitula - a bishop's residence for several hundred years and a UNESCO heritage site "associated" with the Spiš ruins. St Martin's Cathedral contains an interesting mixture of late Romanesque and Gothic elements.

I ended my first day in Spišské Podhradie, where I found the Pension Pod Hradom (Under the Castle). When night fell, I could see the massive lit castle straight from my bed. The town does not have much nightlife, but villagers make up for it by occasionally hosting barbecues, complete with live music. While feasting on a roasted suckling pig, I chatted with a German couple visiting Slovakia for the first time. "In Germany, people are not aware that you have such a rich history here," they reflected. "It is affordable here, the food is very good, and the beer is excellent."

On my second morning, I continued on the main road to Spišské Vlachy. This road goes through several Roma settlements.

I reached Spišské Vlachy - the end point of the northern branch of the Spišská cycle route - well before lunch. There, a light rain started and became my steady companion. The route then turns west, continuing through various small villages to the town of Spišská Nová Ves. Like a roller coaster, the road travelled up and down a seemingly endless collection of small hills.

After an hour of tough pedalling, I spotted a tower in the distance. The gothic church of Spišská Nová Ves possesses the tallest church tower in Slovakia - 87 meters. With its large square and ample restaurants, it is also a good lunch stop. If you would like to try a local specialty, order živánska - a concoction of meat, sausage, bacon, and potatoes roasted in aluminum foil.

Heavy rain compelled me to end my journey here. Although I cycled for only 100 kilometres, I experienced many striking towns, one of the most famous castles in the country, and lovely countryside. Those with more time should not miss Slovenský Raj.

This national park has a well-developed system of hiking trails and boasts some of the finest mountain scenery in eastern Slovakia.

Another highly recommended activity is rafting the Dunajec gorge between Červený Kláštor, Slovakia, and Szczawnica, Poland in Pieniny. Huge, 500-metre-tall cliffs tower over this nine-kilometre gorge and water from the Dunajec river foams up as it courses over limestone beds. For a modest fee (around Sk140), a guide will take you rafting from Červený Kláštor to Lesnica, Slovakia.

Accommodation: Pension Pod Hradom in Spišské Podhradie - Sk1,000 (€25) for a double room with a Sk50 breakfast bonus. On the route, you will see several boards advertising accommodation, mainly private.