THE STATE may borrow money for financing its debt from the public next year.
In its state budget proposal for 2005, the Slovak Finance Ministry plans to issue special bonds available for purchase by Slovaks as well as foreigners.
"Considering the good conditions of the Slovak financial market, the Finance Ministry in cooperation with the Agency for Debt and Liquidity Management (ARDAL) will prepare an issue of state bonds for the public in the volume of Sk5 billion (€125 million) or Sk10 billion (€249 million) with the aim of lowering the expenses [on the state debt service] compared to standard bonds," reads the proposal. 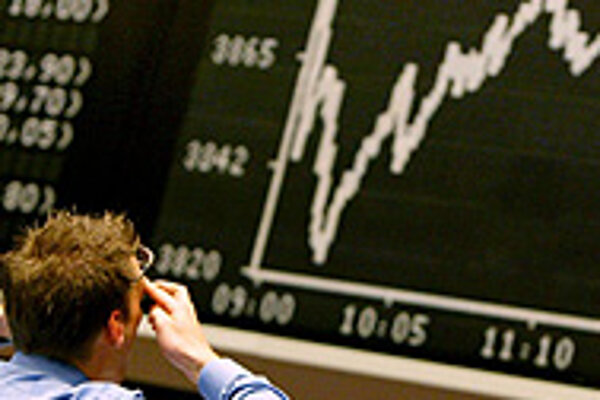 Font size:A-|A+0
THE STATE may borrow money for financing its debt from the public next year.

In its state budget proposal for 2005, the Slovak Finance Ministry plans to issue special bonds available for purchase by Slovaks as well as foreigners.

"Considering the good conditions of the Slovak financial market, the Finance Ministry in cooperation with the Agency for Debt and Liquidity Management (ARDAL) will prepare an issue of state bonds for the public in the volume of Sk5 billion (€125 million) or Sk10 billion (€249 million) with the aim of lowering the expenses [on the state debt service] compared to standard bonds," reads the proposal.

"The bonds will be negotiable, their likely form will be of a bearer bond, meaning any individual, even a foreigner, will be able to purchase them," Tomáš Kapusta, the manager of the debt management department of ARDAL told The Slovak Spectator.

The money raised from the sale of public bonds should make up about 3 percent to 6 percent of the overall volume that the state plans to obtain from the sale of its bonds next year. If the issue is successful, this share could increase in the future to 10 percent or 15 percent.

The whole issue is still only in the consideration stage. Its main characteristics will highly depend on the market situation.

According to ARDAL, the face value of the bonds will be influenced by technical conditions on the market like the costs of printing or trading.

The maturity of the bonds is planned at five years. The state bond will probably not be issued in paper, but electronic form.

The coupon, which is in fact a bond interest rate, will depend on the level of interest rates of comparable bonds on the market of the same maturity issued at the same time.

Today the market level of such interest rates is about 4.6 percent to 4.8 percent annually.

"To simplify the process, it is very likely that the bonds will be sold at a discount (zero coupon bond)," said Kapusta.

A zero coupon bond means that a buyer purchases a bond at a discount below its face value. When such a bond matures, the investor receives one lump sum equal to the initial investment plus interest that has accrued.

The sale of the bonds would be handled through a broker to be selected via a tender. It is likely to be one of the banks in Slovakia. Kapusta did not rule out the possibility that more than one broker will sell the bonds to ensure better distribution.

The state expects that acquiring money through public bonds should be cheaper than through standard bonds. The state budget is likely to save about 0.3 percent to 0.5 percent annually.

The effort to diversify lenders and state debt investors is another reason for the special issue.

On the other hand, the Finance Ministry expects that the bonds will fill in the gap in the market of banking investment products available for individuals.

Currently, the bonds could offer higher returns than term deposits in banks while still guaranteeing a safe investment, as state bonds are generally considered to be the safest securities.

"We offer a risk-free investment tool standing between interest rates in banks (currently at low levels) and investments funds (with a market risk)," added Kapusta.

"If the conditions in the financial market are favourable, we will carry out the issue. We expect a large [public] interest in the mentioned bonds," he continued.

Analysts appreciate the effort of the state to look for different forms of financing the debt, although they are not that optimistic about the success of the public bonds.

"We can call the variabile approaches of the ministry to lowering debt costs and risk positive, even though the bonds for the public are not a new idea here [in Slovakia]," Viliam Pätoprstý, analyst with UniBanka told The Slovak Spectator.

However, he thinks that demand for these bonds will not be high for two reasons.

He explained: "The Finance Ministry will have to set the coupon under the market level for it to make sense for them [the ministry] which is somewhere under 4 percent. That means it would be about 1.5 percent more than [interest rates for] term deposits.

"In our opinion, such a provision is not sufficient for giving up liquidity for five years (the suggested maturity of the bonds)".

Juraj Kotian from Slovenská sporiteľňa added that citizens are actually allowed to purchase state bonds even now. But the face value of the proposed bonds will be lower and thus more affordable for the general public.

"However, it is questionable as to whether the purchasing and administering of one bond in a smaller amount would be more advantageous for an individual than professional asset management funds that are able to flexibly react to market development and optimise revenues," he said.

Kotian emphasised that the interest rate will be crucial. "If the bonds are issued for the purpose of cutting state costs, the coupon will have to be lower than in the secondary bond market.

"For the individual, this means that if they decide to sell the bond before it matures, they will for sure suffer a loss," Kotian told The Spectator.

The first such bonds in Slovakia were issued in 1998 when Sergej Kozlík was the finance minister.

At that time the state wanted to borrow Sk2 billion (€50 million) from the public for one year. The money was supposed to be used for highway construction.

The state was not very successful in this deal. It sold bonds in the volume of about Sk1.01 billion (€25.2 million), which was barely over half of the planned amount.

According to ARDAL, such bonds are common abroad, for example, in Portugal, France, Belgium, Ireland, and Italy. Out of Slovakia's closest neighbours, Hungary has issued these types of public bonds as well.