These witnesses of the Slovak uprising shared their stories in this story from The Slovak Spectator archive. 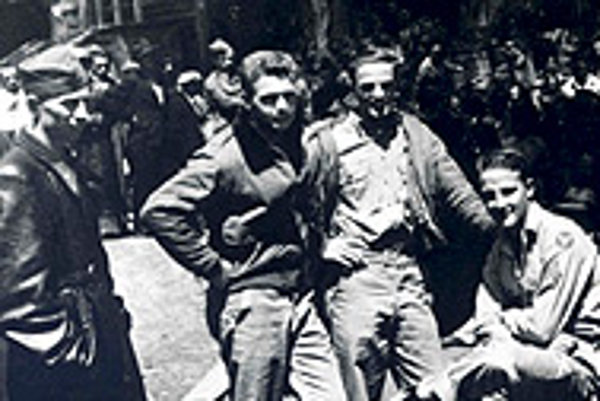 Richard Moulton, third from the left, with members of his B-24 crew and a Slovak doctor during an air raid alert in 1944. Photo: Courtesy of Richard Moulton
Font size:A-|A+0

As the Slovak National Uprising it started, ordinary Slovak people and foreign allied soldiers alike found themselves pulled into events that would define the future of the fledgling nation.

As part of the 60th anniversary's celebrations, veterans such as Richard Moulton, one of the first prisoners of war captured in Slovakia during World War II, and John Theodore Zebrowski, who found himself among the Slovak partisans after escaping his burning bomber, revisited the people and places of that time.

Others could make the trip back to Slovakia only on the paths of their memories. One is Eugene Hodge, a member of the US Air force. Another is Maria Gulovich, 83, an elementary school teacher recruited as a young woman by the Slovak underground and later by the US Office of Special Services (OSS). She was brought to the United States after the war and decorated at West Point by General William Donovan, who led the OSS during the war.

These witnesses of the Slovak uprising shared their stories with The Slovak Spectator.

The Slovak Spectator (TSS): How did you find yourself in the Slovak National Uprising?

Richard Moulton (RM): I was in a B-24 bomber as a nose gunner and shot down by a Slovak fighter pilot, Lieutenant Lang, on June 26, 1944. Of the nine-man crew on our plane, four of us landed near Bratislava and the other five landed in Hungary. We were the first prisoners of war to be captured in Slovakia. Being injured, we were placed in a military hospital on the outskirts of Bratislava for a week or so. More airmen were shot down in early July and all 26 of us were held in a school building until it was decided to move us to Griňava near Pezinok.