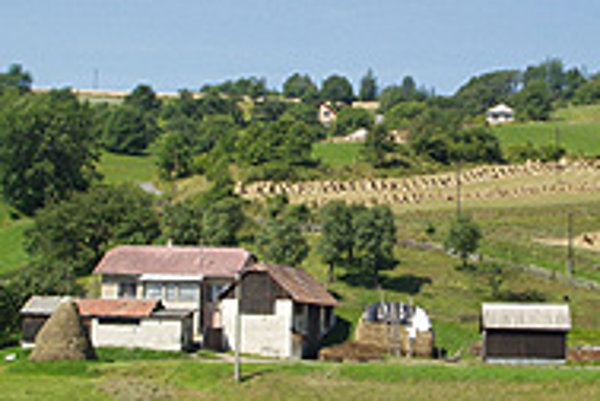 IN 1991, British author Peter Mayle purchased a ramshackle farmhouse in the French countryside, lived there a year, and wrote his classic travelogue, A Year in Provence. For anyone aspiring to write a similar tale about Slovakia, I suggest they look no further than the slopes of Poľana mountain above the municipality of Hriňová.

Like Luberon in Provence, this quirky rural area is inhabited by people tenaciously holding on to their unique culture and way of life. It is also a place defined by one of the most picturesque mountain landscapes in Slovakia: a little bit of Tuscany in the heart of Europe.

During our trip, we will peek into the long-extinct crater of the Poľana volcano, wander through deep forests with rock faces and promontories, visit one of the highest waterfalls of the Western Carpathians, and finally, take a glance at the life of a local farmer.

For this trip, I chose to stay at the hotel near the summit of Poľana mountain (1,458 metres). My first impression of the place was the cold. During the taxi ride from Hriňová to Poľana, the thermometer dropped by 10 degrees celsius. Because of the elevation, skiing here in the winter can be quite good. Near the hotel are three ski lifts (450 to 1,000 metres long), and in the summer, you will find over 100 kilometres of hiking trails in the area. Poľana is a part of the long-distance hiking route Rudná Magistrála (Ore Magistral), which leads from Zlaté Moravce to Stolické vrchy.

After checking in, I hiked the most popular local trail - the route to Zadná Poľana (1,458 metres). The trail starts right in front of the hotel and winds its way through mountain meadows (poľana) and spruce forests to Priehybina gap (1,273 metres). Because the hike does not require much uphill or downhill climbing, it is suitable for everyone.

There are two vista points on it - Katruška and Zbojnícky tanec (Brigand's Dance). Katruška offers a partial but otherwise perfect view of the 18-kilometre-wide volcano crater, and also the skyline of the Low Tatras in the distance. From Zbojnícky tanec, one can see the distinctive landscape of Poľana and its foothills.

As I returned to the hotel on the same trail, I heard laughter. "We are visiting our grandmother down in Hriňová, like we do every year, so we could not resist yet another family climb up to Poľana," a married couple with teenage kids explained. "The peacefulness of this area cannot be found anywhere else," interjected the father.

The entire hike takes two hours and is easy. In the evening, you can sit around the bonfire near the hotel, roast špekačky (pork sausages), and drink beer.

"The hotel is used primarily by groups visiting from Hungary and Germany," the receptionist later told me. "Individuals are not as common. If we get them, they are usually from western Slovakia."

On my second day, I hiked down from Poľana into the valley. This hike goes from rugged mountain forests to terraced fields, and perfectly illustrates the "biosphere" concept.

In 1990, UNESCO designated Poľana as a "biosphere". By definition, biospheres are "areas of terrestrial and coastal ecosystems promoting solutions to reconcile the conservation of biodiversity with its sustainable use". In short, the area contains a mixture of traditional farms and protected wilderness zones, making it an ideal habitat for many endangered species including bear, lynx, and numerous rare birds.

Birdwatchers from all over the world flock to the area to see exotics such as the Tengmalm's owl, the three-toed Woodpecker, and the Western Capercaillie. My co-author once spotted a Ural owl 100 metres from the hotel and his wife saw a highly elusive Lynx many years ago while sitting quietly in the woods above Bystré Vrátka.

After reading a bear warning sign, I got a bit scared and started singing to let these creatures know I was in their midst. After about one hour, I reached the Vodopád Bystré waterfall. At 23 metres high, the fall is amongst the tallest in the Western Carpathians. I scaled the ladders down the stone wall, over which the waterfall jumps, and continued my descent.

In another hour, I began to encounter the biosphere buffer zone: a fairytale landscape of country farms and terraced slopes. Under a sunny sky, cows, charming old farmhouses, and neatly stacked piles of grain greeted me.

"Young man, what are you photographing?" An old lady stopped me. "Look, here in my barn I have two horses; in the yard, I have chickens; and now I am going up to the slopes to check on my sheep." My head was spinning in disbelief - how can this woman get so much done? "I have lived this way my entire life. This is my work, and we are self-sufficient now. We mow the meadows several times a year, and that's how we get hay for our cattle. Over there are our piles of harvested grain crops. We will thrash them next week. We will then use the grain to feed our pigs and chickens."

Because farming here is still done in traditional ways with little mechanisation, a communitarian spirit prevails. When farming activity peaks in August, neighbours assist other neighbours in harvesting the crops. Last September, my American co-author experienced first-hand how difficult farming can be when he was asked by his mother-in-law to spend a day picking apples, walnuts, and plums at their farm in Bystré Vrátka. At the end of the day, his Slovak family chastised him for his meagre harvest. "I got bored," he lamented, "and snuck back to the house to surf the internet, eat maminka's homemade mozzarella cheese, and play with the dogs."

After about four hours, I reached the town of Detva. Each July, Detva hosts the Folk Festival Under Poľana, which showcases the unique dancing, traditional costumes, and music of central Slovakia and also features performances by groups from other parts of the country and from abroad.

Just above the town by the cemetery I passed by several wooden crosses, richly carved and painted with colourful ornaments. On Detva's Calvary hill is a museum that showcases some of these crosses. Detva also possesses a cycle tourism office, where one can rent a bike, hire a local guide, and explore the 320 kilometres of cycle routes in the area, including stunning mountain biking around Látky east of Hriňová.

The Poľana region is virtually undiscovered by tourists, but it has huge potential. One of the current trends in rural tourism is agrotourism - people stay on a working farm and have the option of participating in such tasks as raking hay, picking crops, or herding sheep. Because of the beauty of the farms under Poľana and their traditional means of farming, this area would be ideal for this kind of vacation.

Transportation: about 3.5 hours by car from Bratislava to Hriňová (via Zvolen), then about 12 km on mountain roads to the hotel Poľana. One can also take an express bus to Detva or Zvolen, a local bus to Hriňová, and from there, hire a cab to the Hotel Poľana.
Accommodation: Horský Hotel Poľana (Sk700/double beds) www.polana.sk
Bird-watching tours: www.travelslovakia.sk
Cykloklub Poľana (Slovak only): www.sckpolana.psg.sk