SLOVAKIA's opposition parties have manufactured a fragile agreement to unite in their efforts to sack ministers of the Mikuláš Dzurinda cabinet.
Leaders of the Movement for a Democratic Slovakia (HZDS), Smer, and the Slovak Communist Party (KSS) agreed at a meeting on August 31 that if any of the parties collected 30 deputy signatures under its proposal to recall a minister of the cabinet, the other two parties would support the initiative in parliament. 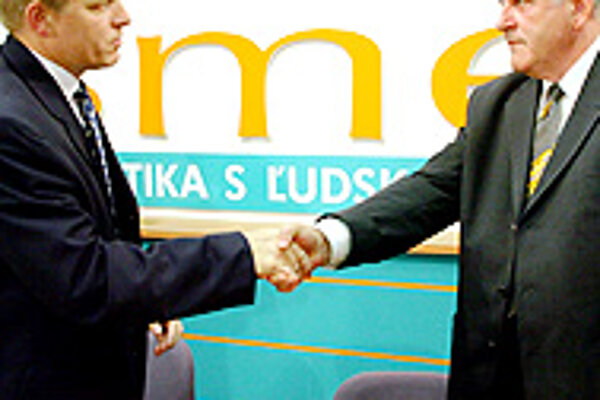 Font size:A-|A+0
SLOVAKIA's opposition parties have manufactured a fragile agreement to unite in their efforts to sack ministers of the Mikuláš Dzurinda cabinet.

Leaders of the Movement for a Democratic Slovakia (HZDS), Smer, and the Slovak Communist Party (KSS) agreed at a meeting on August 31 that if any of the parties collected 30 deputy signatures under its proposal to recall a minister of the cabinet, the other two parties would support the initiative in parliament.

High on the opposition blacklist is Interior Minister Vladimír Palko for what they call a share of responsibility for lost wiretapping records that were to have served as evidence in the corruption case of one of Palko's Christian Democratic Party peers.

However, no concrete names were mentioned at the opposition get-together.

The leaders, though, were careful about interpreting the meeting as an ironing out of their past conflicts. Fico refused to comment on whether problematic relations between him and Mečiar have eased.

"We are not interested in interpreting the meeting as an act of forgiveness," he stressed.

"This was a standard meeting of the leaders of parties in the opposition. What is so special about it? Should we kill each other or walk around and glare at each other, or have nothing to do with each other?" Fico asked the daily SME.

The opposition will try to find a joint candidate to fill the post of chairman of the Supreme Audit Office, as the current chair, Jozef Stahl is to wrap up his term.

As for the healthcare reform bills now in parliament, the parties agreed not to support the package as a whole. However, they might support individual amendments that they belive will improve the reform, the news wire SITA wrote.

The HZDS, KSS, and Smer will mutually support initiatives to push down the value-added tax rate on selected food products to 10 percent.

Fico might also enjoy the backing of his colleagues when advocating a cut of excise taxes on mineral oils, which could push down petrol prices by Sk1.10 (€0.03).

Mečiar said the Free Forum must show its true colours and tell where it belongs in parliament and what its goals are.

The last meeting involving all three parliamentary opposition parties was held in mid-January, 2004, and turned into a fiasco after Fico accused Mečiar of collaborating with Dzurinda and not being willing to help the opposition have the prime minister sacked.

"The only thing we could agree on was that we don't agree on anything," said Mečiar on January 15.

Fico stormed out of the meeting and blamed the complete failure of the opposition's efforts to take a united stance on Mečiar.

"Today's meeting fully proved that the cabinet of Mikuláš Dzurinda has the complete confidence of the HZDS," Fico said.

Mečiar did indirectly support Dzurinda on January 16 when he said that the prime minister's departure would not solve any problems.

When commenting on the meeting, KSS leader Ševc said that Mečiar and Fico were quarrelling over who could take the prime ministerial post once Dzurinda fell.

The opposition talks were held to unify reactions of the opposition to Free Forum leader Ivan Šimko's insistence that Dzurinda leave his post.

In early August 2004, the information leaked that Mečiar had tried to persuade deputies of the Free Forum and Smer to overthrow the cabinet. However, the parties did not consider his initiative credible or serious. The opposition also did not have the necessary number of votes to bring down the government.

"It was nothing official. He talked to us in the hallways saying that we should try it so that we could show them our strength," said the Free Forum's Branislav Opaterný, describing Mečiar's endeavours.