NONE of the fears of a vast wave of immigrants from Eastern Europe seeking labour in the old EU member countries have materialised in the months since EU expansion this past May.
Though the European Commission did try to calm immigration concerns even prior to EU enlargement, tabloids and populist politicians in many EU member countries raised a red flag over immigration issues. 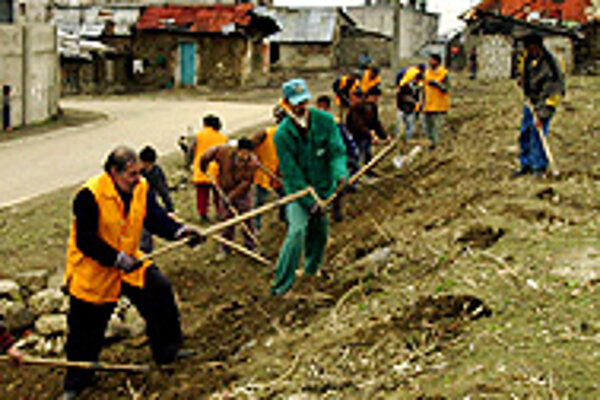 Font size:A-|A+0
NONE of the fears of a vast wave of immigrants from Eastern Europe seeking labour in the old EU member countries have materialised in the months since EU expansion this past May.

Though the European Commission did try to calm immigration concerns even prior to EU enlargement, tabloids and populist politicians in many EU member countries raised a red flag over immigration issues.

In response to the EU members who decided to shield their labour markets, the Slovak government insisted that few Slovaks would want to head westward to seek labour.

"There has been no 'flood' of migrants from new EU states since May 1," said Des Browne, the United Kingdom's minister of state for citizenship and immigration on June 16. It was his first official statement on the impact of the expansion of the EU.

"In a speech at the Slovak embassy in London, Mr Browne said early indications were that those who have come to work will be staying for weeks or months rather than years," the British daily The Guardian wrote on June 17, 2004.

He also disclosed that the majority of those from eastern Europe who have registered as workers with the government since EU entry were already in Britain as illegal entrants and have now "regularised" their position in the country, according to The Guardian.

Sweden and Ireland, which opened their markets to new members, have had similar experiences.

The National Office of Social Insurance in Sweden announced that it has not registered signs of the feared "social tourism", though the generous Swedish system is accessible to people from the new member countries, the news wire ČTK wrote.

The Slovak Labour Ministry says that the recent developments only prove its earlier predictions about post-entry immigration.

"At the time that the EU member countries were deciding about applying transition periods for citizens of the entering countries, we warned that there was no danger of a great migration wave. The facts have proved our stand and we expect no decisive changes to this trend," the spokesman of the Slovak Labour Ministry, Martin Danko, told The Slovak Spectator.

The EU accession treaty with the 10 acceding countries enabled the old EU members to apply a two-year transition period during which citizens of the new member countries cannot access the labour markets of the old members. In special cases, transition periods could stretch up to seven years in total.

Slovakia refrained from taking reciprocal measures against the old EU members by restricting access to the Slovak job market.

"After entering the EU Slovakia has not registered any decisive influx of labour from member countries and it does not expect such an influx in the future," Danko added.

Contrary to pre-entry fears, human resources experts suggest that more Slovaks abroad are expressing interest in returning to Slovakia due to the prospects they see opened by EU entry and the possibility of applying their experience here.

"We believe that the majority of technical talent that wanted to migrate did so long ago," said Ronald Bastýř, branch manager at TMP/Hudson Global Resources told The Slovak Spectator.

According to Paul Binder, TARGET International Executive Search director for central Europe, people in central Europe are not as mobile as one might think.

"We know from our profession how difficult it is to suggest an attractive position in, let's say, Nové Zámky, to a candidate from Bratislava," he told The Spectator.

Work force mobility remains among the most important factors for long-term business development, and Slovakia continues to struggle with it.

"Mobility remains a serious problem of the domestic labour market. It comes from certain social-psychological stereotypes among citizens, but also some objective economic reasons," the Labour Ministry told The Spectator.

Finance Minister Ivan Mikloš confirmed this trend during the last conference of The Economist in Bratislava on June 3.

"It is true that the mobility of the Slovak labour force is low. That was one of the main arguments I was using during negotiations with EU countries on opening their labour markets. It is exactly the reason why there is no danger of an invasion of EU labour markets by Slovaks," said Mikloš.

However, the Labour Ministry expects changes in mobility on the internal labour market.

"Regional imbalances are a natural phenomenon in all the EU member countries. Not even the system of financial support has been able to change this trend. This fact puts a strong pressure on citizens to become more flexible when seeking labour. The social system itself is set to stimulate the activities and mobility of the individual. In Slovakia we are only witnessing the beginning of internal mobility, when we see some people moving to the more prosperous western parts of the country," Danko explained.

Germany and Austria, which fear an influx of cheap labour from their eastern European neighbours, have announced a seven-year transition period.

France has a five-year transition period, but has proposed an agreement on the exchange of experts under 35 for between three to 12 months with the possibility of an extension by six months, the SITA news wire wrote.

Only Ireland allows employment for new EU citizens under the same conditions as its domestic work force. However, similar to the UK, it limits foreigner's entitlement to social benefits.