Cabinet gets help to reach the people

THE WORLD Bank has approved a grant for the Slovak Cabinet Office worth $350,000 (€291,303) that should be used primarily to improve the cabinet's communication of reforms.
The improvement of the cabinet's information strategy should help ensure that the general public receives comprehensible and coordinated information regarding the cabinet's reform plans and ongoing reforms. 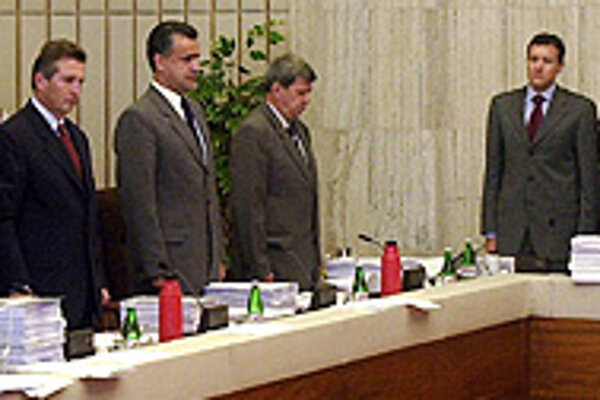 Font size:A-|A+0
THE WORLD Bank has approved a grant for the Slovak Cabinet Office worth $350,000 (€291,303) that should be used primarily to improve the cabinet's communication of reforms.

Ingrid Brocková, head of the World Bank's Slovak office, said that the bank decided to support this area because "the strategy and the system of informing the public about the required changes is one of the areas that the cabinet perceives as a deficit in its expertise and an insufficient institutional safeguards."

"The result [of the grant] should be that the public always has sufficient quality information on the reasons and goals behind individual cabinet steps and their impact on citizens," the bank said in a statement sent to The Slovak Spectator.

The Slovak cabinet will receive the money after signing a respective agreement with the bank. Cabinet ministers should discuss the agreement in two weeks.

The Slovak government will contribute 25 percent of the sum provided by the World Bank. The project should be completed by February 2006 at the latest, impacting the cabinet's Information Strategy Centre and seven ministries responsible for the cabinet's key economic and social reforms - the ministries of finance, health, labour, economy, justice, agriculture, and education.

Representatives of other ministries, their spokespersons, consultants, and various experts should for a group to work on improving their communication strategies as well.

According to Tatiana Rosová from the Information Strategy Centre, all departments will benefit from the grant.

At a press conference held on August 30, Rosová said that every ministry would be provided with a "permanent know-how base that should help improve the work of the centre whose resources are used by all ministries."

According to Rosová, the Slovak cabinet asked for the grant aware that it was currently working on a series of crucial reforms that need to be communicated clearly to the public.

Among the most important and extensive reforms are, for instance, the healthcare reform, pension reform, and education reform.

According to a survey presented by Rosová, 50 percent of the Slovak people know something about three parts of the ongoing major reform - the health care, pension, and tax reforms.

Many people know nothing or very little about other reforms.

"This is quite an alarming situation considering that many of these reforms are in the implementation stage," Rosová said.

Grigorij Mesežnikov, head of the Institute for Public Affairs think-tank in Bratislava, welcomed the grant.

"Communicating with the public about reforms is very important because the success of reforms is linked very much to the popular support of individual reforms.

"he more discussion there is about reforms, the more information people get to support or reject them in a qualified manner," Mesežnikov told The Slovak Spectator.

Rather than providing money solely to the right-wing cabinet of current PM Mikuláš Dzurinda, the World Bank argues that the grant should be understood as a "service to the citizens," Brocková said at the press conference.

"We perceive the grant as a service to the citizen, and as a tool to improveme the overall discussion of the country's reforms," she said.

Acording to Brocková, the effect of the grant will outlive the current cabinet, creating an effective and comprehensible system of communication between the state administration bodies and the public.

Speaking specifically about this cabinet, however, Mesežnikov admitted that the Dzurinda government had lost some public support due to bad communication about the reforms in some sectors.

But, he added, "apart from the cabinet's presentation in the field of reforms, the government's image was also hurt by the internal conflicts in the ruling coalition."

So far the World Bank has provided several special grants to Slovakia and released a total of $415 million (€345 million) for the support of the Slovak reforms, including the pension and healthcare reforms.

In one example of a coming attempt at communication, the Slovak cabinet will start an information campaign on the pension reform prepared by the Labour Ministry.

The campaign will last 10 months and will provide Slovaks with facts about the reform, which has been designed to enable working people to save additional pension money in personal, second pillar accounts in addition to the current mandatory pay-as-you-go system.