The story of one Canadian

A ROBUST group of 159 Slovakists from 34 countries took part in a recent 40th-year jubilee for Studia Academica Slovaca (SAS) in Bratislava, the most prestigious summer school for the Slovak language. The two-week-long seminar was, as usual, devoted to the study of Slovak language, culture, and history, including trips around the country, special ceremonies, and even a meeting with Slovak President Ivan Gašparovič. 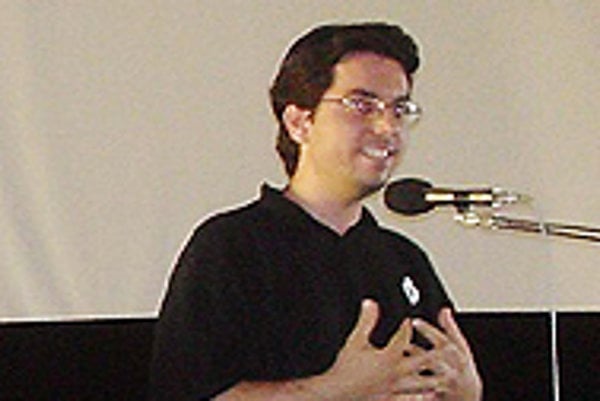 Font size:A-|A+  Comments disabled
A ROBUST group of 159 Slovakists from 34 countries took part in a recent 40th-year jubilee for Studia Academica Slovaca (SAS) in Bratislava, the most prestigious summer school for the Slovak language. The two-week-long seminar was, as usual, devoted to the study of Slovak language, culture, and history, including trips around the country, special ceremonies, and even a meeting with Slovak President Ivan Gašparovič.

"The Slovak president received the SAS students for the first time in the history of this reputable event," said the SAS director, Professor Jozef Mlacek.

"On the occasion of our jubilee, we also organised a symposium attended by three dozen other specialists - Slovakists both from this country and abroad," he added.

One of those to shake the president's hand was 28-year-old Canadian Cyril Bagin.

How did Bagin fare among the students, professors, translators, philologists, foreign Slovaks, and other lovers of Slovak language?

"Well, each year there are a couple of students among the SAS participants who become the soul of the event and favourites for the others. Cyril was here for the first time. However, among our guests, whether they were from Hungary, Japan, Russia, France, China, the USA, or other countries, he became a central point of attention, thanks to his cheerful, jovial, and friendly nature," said Mlacek with a smile.

Bagin said "I am very glad to be able to come to SAS. I would have never thought that I could find myself in such a wonderful international community, united by the Slovak language and love for Slovakia.

"Maybe we Slovaks sometimes lack self-confidence. If someone told me before SAS that the Slovak language was studied, for example, in Madrid, Azerbaijan, or in South Korea, I would have probably smiled at his or her claim," added Bagin.

But what relation does this native of Windsor, Ontario who, after earning a bachelor's degree in philosophy studies theology in London, Canada, have to do with Slovakia?

"My father comes from Kameničany near Dubnica nad Váhom, and my mother was born in the village of Hrabovec near Humenné.

"Both came to Canada after the Russian military invasion of Slovakia in 1968. My mother remained there during a visit to her aunt in Toronto. My father bought a trip to Austria, where he got off and never returned. His next steps led to Windsor, where he found a job in a Ford automobile factory. Our family has lived there since."

When asked how his parents got to know each other, he replied: "Very simply. In our family, this nice story is told very often. My father came to Toronto for an event of Canadian Slovaks, where he received an extra gift. When he went to a church in the city, he saw a nice girl standing in front of it. He started to speak to her - and this is my mother."

Thanks to his parents, Cyril speaks Slovak fluently. Only his accent reveals that he did not grow up somewhere between the Danube River and the Tatra Mountains.

So, why did he decide to come to SAS, which has counted only 40 Canadians among its 5,000 participants?

"Above all, to improve my grammar and knowledge of history and literature," he said. And certainly, in the country of his roots, he visited dozens of his relatives.