The art of politics

STANDING outside his office building, the mayor of Pezinok gives final instructions to the workers repairing the building's façcade. After a short discussion, Mayor Oliver Solga turns to accompany this writer to the Malokarpatské múzeum, where two decades of his artwork is on display.
Before becoming Pezinok's mayor in December 2002, Solga was an artist. He started drawing as a child, and stuck with it through high school. 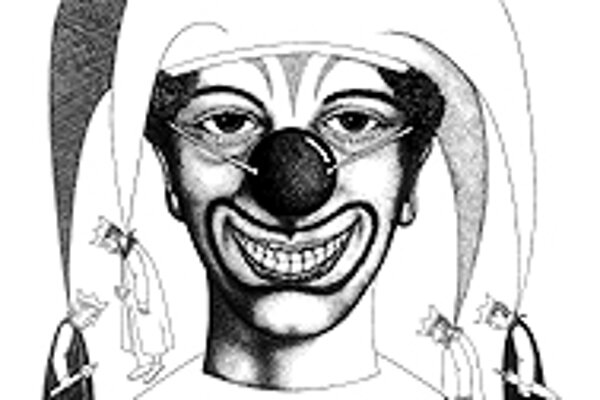 STANDING outside his office building, the mayor of Pezinok gives final instructions to the workers repairing the building's façcade. After a short discussion, Mayor Oliver Solga turns to accompany this writer to the Malokarpatské múzeum, where two decades of his artwork is on display.

Before becoming Pezinok's mayor in December 2002, Solga was an artist. He started drawing as a child, and stuck with it through high school. In 1985 he graduated from the Philosophical Faculty of the Comenius University in Bratislava with an Art History degree. Since then he has illustrated several books, published his cartoons in more than 80 newspapers and magazines, and seen his work exhibited in galleries at home and abroad.

These days, Solga is a much-sought-after figure, but not as an artist. As he makes his way across the street to the museum's exhibition hall, passersby stop him every few meters for a quick word about local politics.

Upon entering the Malokarpatské múzeum, Solga relaxes noticeably. Tension related to municipal infrastructure seems to fade away, and he lets himself dive into the artistic world he left behind several years ago.

Entitled Definitions of Humour, the exhibition reflects on Solga's first major exhibit, held at the Malokarpatské múzeum 20 years ago. Three rooms are dedicated to 40 cartoons and drawings. These represent Solga's work over the course of two decades.

Pezinok citizens who have known Solga as an artist can follow his development in the field. Newcomers can see what their mayor used to do before "mayoring".

First on display are Solga's latest works, black and white drawings featuring optical plays on Zebra stripes. The display continues with his postage stamp designs, including two firsts: a stamp that celebrates Slovakia's first participation in the 1996 Olympic Games, and Pezinok's first stamp. The exhibit concludes with a selection of Solga's most popular cartoons.

When Solga became mayor he stopped drawing completely. "As it is said, one cannot sit in two chairs. I still follow the work of others and I regularly go to exhibitions, but I have no time to draw myself."

The mayor's friends ask him if he misses creating. "I tell them, yes, I do, but only for 10 minutes at a time because then I start thinking about town projects."

Solga started with communal politics in 1994, as a member of the city council. Four years later he became a vice mayor.

Leadership came naturally to Solga. "When a person is a local patriot in the right sense, when he likes his town and wants to do something for it, he can do it as an artist, but he could perhaps be more useful if he brought his thoughts to the city council."

Asked about his definition of humour, Solga remarked that successful cartoons consist of good ideas that are drawn well. The best humour, he continued, is not the simple kind.

"Cartoons should make people think and search their own opinions," explained the mayor.

Solga added that he would like to return to drawing after finishing with "mayoring". No more black-and-white drawings, though. Next time he will do colour.