Kill Bill Vol 2
Starring: Uma Thurman, David Carradine, Michael Madsen, Daryl Hannah, Gordon Liu
Directed by: Quentin Tarantino
Running time: 137 min
Rating: 8 out of 10
QUENTIN Tarantino has said that the only type of movie he doesn't like is pornography. This should surprise no one familiar with his work, as each of his movies seems saturated with other genres and other movies. 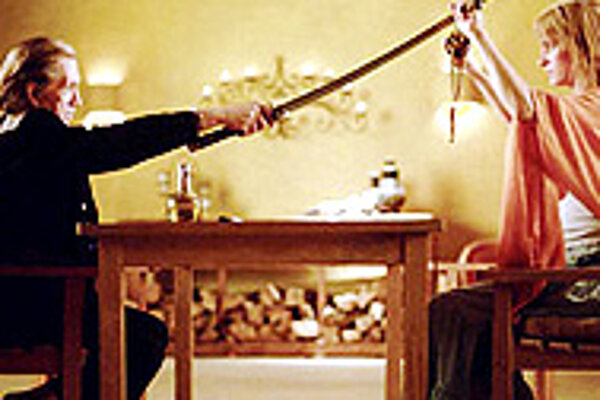 That film shares something with pornography: extreme brutality. As The Bride, Uma Thurman is subjected to a seemingly endless spiral of violence. Bruised and bloodied countless times, she's also shot in the head, raped, punched, kicked, and sliced - many of these things by her former friends, colleagues, and a lover no less.

But Thurman, as The Bride, handles it exquisitely. She demonstrates a determined focus not seen since the peak of westerns and samurai films. To the casual observer, the extent of this violence could seem excessive, or even sadistic.

However, in its own twisted way, Kill Bill is a love letter to Thurman just as much as Sofia Coppola's Lost in Translation is one to Bill Murray. Tarantino has called Thurman his muse, the Marlene Dietrich to his Josef von Sternberg (the German actress and director, respectively, who made a number of beautiful, sexually charged films together - the most famous, and lush, being The Scarlet Empress).

It just so happens that in the exploitation movies Tarantino so cherishes, horrible things happen to women. But they fight back - and make those bastards wish they had never messed with them. So, yeah, there's horrible violence, but there's also vindication and much for feminists to latch onto.

Kill Bill Vol 1 was the story of a woman who wakes from a coma to discover that those she once most trusted have robbed her of four years of her life and (she thinks) of her child. She begins to exact her revenge, and is willing to use any means necessary to get it. The movie was short on talk, introspection, and background, and long on gore and extreme, stylised violence - much of it directed at our heroine.

Kill Bill Vol 2 provides the talk, introspection, and background. But it's also gory and violent - again, much of it at the expense of our heroine. This time she's spit on, shot full of rock salt, and buried alive. And, once again, she continues to avenge her attempted murder.

But we also learn who she is, how she became so proficient in martial arts and swordplay, and why her relationship with Bill is so complicated. There are flashbacks to scenes shown or alluded to in the first part, and further flashbacks to scenes before that. We see her as an awestruck young woman, a fierce warrior, and, most lovingly, as a mother.