THE NATIONAL United Nation's High Commissioner for Refugees office (UNHCR) called Slovakia's policy for granting asylum "unsatisfactory" and accused it of having the lowest refugee acceptance rate in the European Union.
According to the daily SME, UNHCR's concern is mounting because the number of refugees seeking asylum in Slovakia is growing. 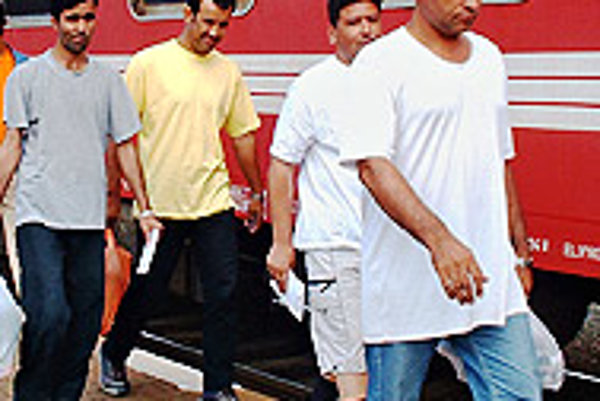 Font size:A-|A+0
THE NATIONAL United Nation's High Commissioner for Refugees office (UNHCR) called Slovakia's policy for granting asylum "unsatisfactory" and accused it of having the lowest refugee acceptance rate in the European Union.

According to the daily SME, UNHCR's concern is mounting because the number of refugees seeking asylum in Slovakia is growing.

In the first six months of 2004 as many as 6,400 refugees sought asylum in Slovakia - the highest number in the history of the country, representing a 90 percent increase over the same period last year. Of the 6,400 applicants only two people received asylum.

UNHCR spokeswoman Mária Čierna claims that while Austria has granted asylum to 96 percent of Chechen asylum seekers, Slovakia has denied asylum to all such cases.

Bernard Priecel, the director of Slovakia's Migration office (MÚ) with the Interior Ministry, believes differently. He told The Slovak Spectator that one of the two people granted asylum in 2004 was a Chechen woman.

"UNHCR is seriously concerned about the asylum system in this country. Even after Slovakia's entry to the EU, the country has failed to grant an appropriate number of [asylum] recognitions, especially given the sharp increase in applications," said a statement issued by UNHCR.

According to UNHCR, Slovakia has become the main crossroads for two smuggling routes: East to West from Russia and Ukraine, and South to West from the Balkans.

Priecel of the MÚ defended his office against the criticism. "We are conservative about granting asylums because Slovakia is not in an economic position to afford to issue unlimited asylum to people for humanitarian reasons.

"We grant asylum according to the Geneva Convention, that is, when people are persecuted in their home states because of political, religious, or race reasons," Priecel said.

He further defends the ministry's stance by saying that 95 percent of the asylum applicants are migrants who do not want to settle here. "They say as much during the interview. They want to go further west, and we will not grant asylum to such people," said Priecel.

Priecel adds that many of the Russian applicants claim to be Chechens. "They cannot prove it," he said.

UNHCR is convinced that Slovakia can accept and integrate more refugees. "Slovakia can do it despite its own economic problems and limitations," Čierna told The Slovak Spectator.

Priecel retorted, "I understand that UNHCR's view is different from [MÚ] but we have to protect the interests of Slovak inhabitants." As for having the lowest acceptance rate of asylum seekers in the EU, he maintained that his office wanted to ensure that Slovaks do not develop an animosity towards refugees.

UNHCR recently coordinated a task force in cooperation with state authorities, NGOs, and the EU, to analyse the drawbacks of the Slovak refugee system. The final report makes clear that MÚ and the police units that deal with foreigners and border patrol will need more financial, technical, and human resources to cope with the refugee challenges that EU accession has created.

"The number of applicants is decreasing in Western Europe, which has greater resources and more experience in dealing with refugee issues, while the number is sharply increasing in Slovakia. A transfer of capacities from these countries to Slovakia should help the EU to find a more homogeneous approach on asylum policy," a UNHCR statement reads.

Added Čierna: "Strengthening the national asylum system, including integrating more refugees, should be taken into account when designing the future policy on asylum in Slovakia. The recognition rates as they stand are unsatisfactory.

"It is also true that many asylum seekers are leaving the refugee centres during asylum procedure," Čierna admitted.

A few days ago the local media reported that Slovakia's Migration office (MÚ) was preparing a draft revision to the asylum law to prevent refugees from submitting duplicate applications.

The revision limits refugees from lodging asylum requests. They must allow two years to elapse after the first petition is rejected.

"We want to prevent [speculative] asylum requests that migrants use to legalise their stay in the country," Anna Šidová, the head of MÚ's legal department, said to SITA news agency on September 5.

"Asylum seekers lodge two to three requests on average, but we have had asylum seekers who submit nine," she said.

Applications take several months to process and until their applications are decided upon, migrants can stay in Slovakia.

The revision will also enable asylum seekers to work legally if their applications are not processed within one year.