JUST when Slovakia's culture minister harangues its nation for "colossal cultural ignorance" and denigrates the capital for being "commercial, consumerist, and kitschy", Bratislava welcomes the 5th annual festival of chamber music, Convergences 2004.
The event is not state sponsored, nor is it produced for profit. It is a series of concerts that brings together musicians solely to listen and play. 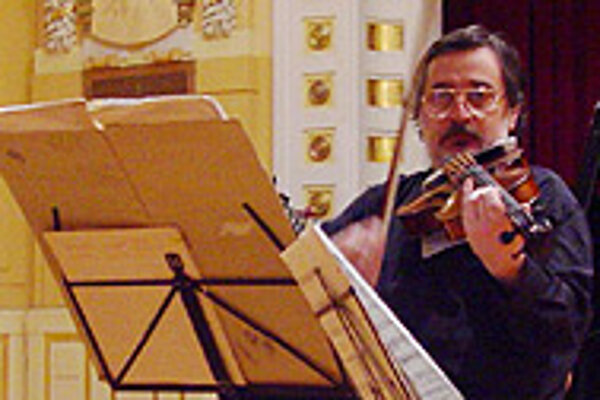 The event is not state sponsored, nor is it produced for profit. It is a series of concerts that brings together musicians solely to listen and play.

Convergences does more than redeem Slovaks from the culture minister's accusations: The festival's two closing concerts also help struggling chamber musicians get the exposure they need - and that translates into much-needed musical and financial support.

"We are an independent festival fighting for finances but we can still help musicians who could really use support," said event organiser Jozef Lupták.

A cellist, Lupták founded the festival to revive "the old, homely atmosphere of families coming together to enjoy playing and listening to music". Convergences 2004 will hold four concerts the week of September 16. The festival will donate half the money collected to various charities.

Convergences 2004 opens on September 16 at 19:30 at Klarisky Church. The Bratislava Opera Aperta ensemble will deliver a concert devoted to "minimal" music and Austrian siblings Christian and Margit Platna will open an exhibition of abstract oil paintings.

"It is an attempt to create an informal platform for musicians and listeners based on the old tradition," Lupták explained.

The informal gathering will start at 16:30 in Klarisky's courtyard and run until midnight. A "cocktail" of five, 40-minute concerts of various styles will be served, along with refreshment. Among the foreign guests - Cohen and Mendelssohn - will be Bratislava soloists and ensembles, including the Lotz Trio playing old-time basset horns.

Convergences originated in 2000. Its title comes from the album created by the well-known, contemporary Slovak musician and music composer Marián Varga. The philosophy of Varga's work is to join classical music with new forms of musical expression.

"The word 'convergences' means coming together. It is the joining of two cultures or [opposite] poles, which, in fact never meet," said Lupták.

The event encourages cooperation between Slovak and foreign musicians, and links Slovak musical traditions with those of Europe and farther afield. Convergences festival incorporates various musical genres ranging from classical to jazz and improvisation to contemporary music. It also enlarges its scope by embracing other artistic genres, such as this year's painting exhibition.

"There is high quality classical chamber music in Slovakia but it needs new impulses and inspirations from abroad," the organiser said.

This year, the festival includes a new musical genre - ethno music. The 50 members of the Apsora choir led by Kelarová will perform Roma songs. The featured works are primarily by contemporary composer Desiderius Dužda and will air at the festival's closing concert on September 19.

The Apsora choir comprises people who have gone through Kelarová's International School For Human Voice workshops. According to Kelarová's philosophy that "everyone can sing", the workshop explores the depths of the human voice. Kelarová's workshops are an intricate process of learning how to lay bare deep pain and/or release happiness. The evening's performance promises to be emotional. Cellist Lupták plays as guest.

The singer, teacher, and Roma activist Kelarová is not a newcomer to the festival. The names of other festival performers by and large return annually. Still, said Lupták, "Convergences focuses on music, not on a star line-up."

One of Lupták's primary motives for the festival is to form a community that meets regularly.

"Our philosophy is to share music and its novelties. Above all, the whole concept [of Convergences] is about creating a real relationship," Lupták said.

Convergences 2004 is organised by the Konvergencie civic association. On September 16 and 17 concerts start at 19:30 at Klarisky Church on Farská; on September 18 at 19:30 at Moyzes Hall on Vajanské nábrežie; and on September 19 at the Big Evangelical Church on Panenská Street. Tickets are on sale in advance (Sk90-Sk200) at www.eventim.sk and Dr Horák, and on day of the concerts at the venues. Tel: 0905/539-057.