THE CONSTRUCTION of the fifth bridge over the Danube River in Bratislava, known under the working name Košická Bridge, is coming to an end. Between September 16 and 21 the builders will position the 5,200-ton central part of the bridge across the river. This will be a technical peak of this remarkable civil engineering project.
During the positioning, water transport on the Danube River will grind to a complete halt. 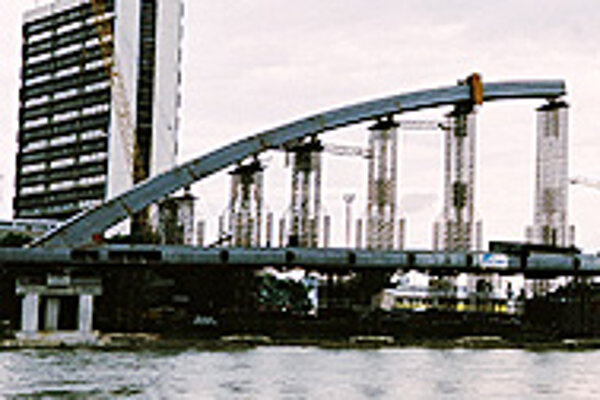 Font size:A-|A+
THE CONSTRUCTION of the fifth bridge over the Danube River in Bratislava, known under the working name Košická Bridge, is coming to an end. Between September 16 and 21 the builders will position the 5,200-ton central part of the bridge across the river. This will be a technical peak of this remarkable civil engineering project.

During the positioning, water transport on the Danube River will grind to a complete halt. One end of the bridge's span will be transported from the left riverbank with the help of four rigged ships to its final position on a pillar in the river close to the right riverbank. This very demanding operation is expected to attract many spectators.

At a recent "open door", when bridge builders opened the site to the public for a few hours, high public interest was confirmed. Instead of 5,000 visitors expected by the organisers, more than 15,000 people arrived to see the work in progress.

The construction crew has assembled the central part of the bridge on the left bank of the Danube River. One end of the 231-meter-long span has been installed into a huge bearing built specially for the purpose. The span will be moved to its final position in optimal water level and weather conditions.

"During the first day of the positioning operation, the free end of the span will be moved onto the four vessels rigged together," director general of the investing company Metro, Ladislav Csáder told the press.

This exact operation, if everything follows the plan properly, should last about five or six hours. It promises to be the most interesting part of the whole operation. Probably the best place for spectators is on the right riverbank close to the Starý Most. On the third and last day of the operation the span's end will be moved from the rigged ships to its final seat on the pillar. Thereafter the span will be fixed into position. Finishing operations will follow.

The plan to build a bridge across the Danube River in this part of Bratislava dates back to the communist regime. An international tender in 2002 produced a winner - a consortium led by civil engineering company Doprastav. Czech company Hutní Montáže Ostrava is carrying out the bridge's final positioning.

Bridge construction started in February 2003. Costs are estimated at Sk4.280 billion (€110 million) after investor Metro requested Sk680 million (€17 million) due to inflation and changes in the value-added tax.

The bridge should be operating in May 2005. It measures 854 meters long and 32 meters wide. Its steel arch is 36 meters high.

The builders believe that Košická Bridge will be an attractive addition to the city's skyline. After its completion, this remarkable architectonical project with its pillars, colours, and showy night illumination will certainly dominate the city's horizon.

Bratislava has not selected an official name for the bridge yet. Its working name derives from the street where the bridge starts (on the left bank). In Slovak, the name Košická is grammatical nonsense.

Citizens have already submitted proposals for the bridge's name. Many of the ideas reflect the latest development in the country (admission to the European Union), Slovakia's personalities (such as Alexander Dubček), and the site location itself (the spot of former crude oil refinery Apollo, which was destroyed in WWII, and the former open-air pool, Lido).