ECONOMY Minister Pavol Rusko is satisfied with the privatisation commission's choice of Italian company Enel to buy a 66-percent stake in power utility Slovenské elektrárne (SE).
Though the official announcement is not scheduled until next week, Rusko is expected to name the commission's top pick. 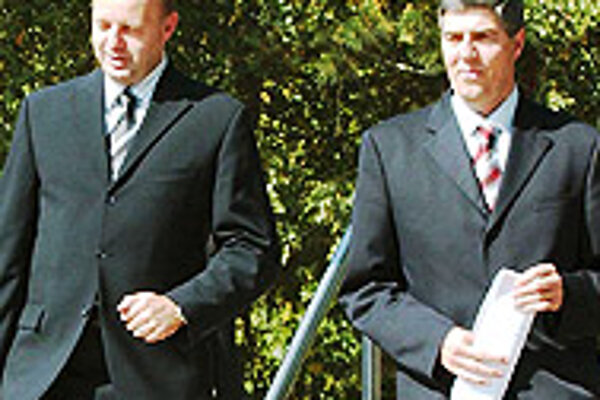 Though the official announcement is not scheduled until next week, Rusko is expected to name the commission's top pick. There is just one snag: worries over the way the economy minister conducted the privatisation proceedings, particularly in regards to the completion of nuclear power plant Mochovce.

The Hungarian Coalition Party (SMK) could block further progress if details of the privatisation submitted by Rusko and the winning bidder do not match previous coalition agreements.

A September 10 parliamentary resolution urged the government to take all steps necessary to ensure the completion of the third and fourth blocks of Mochovce, which is the newer of two nuclear facilities operated by Slovenské elektrárne.

While other coalition party members are cautious in their support for the privatisation, the SMK openly asks Rusko to clarify the details.

Its top concern has to do with whether Rusko conditioned the sale of the government's Slovenské elektrárne shares with the completion on the nuclear power utility Mochovce.

The SMK wants clear statements from Rusko on the matter.

"We feel that original agreements and decisions of the cabinet [about completion of Mochovce] have not been kept in all aspects," Deputy Prime Minister and deputy chairman of the SMK Pál Csáky told private television JOJ.

István Harna, SMK deputy chairman for Economy, told The Slovak Spectator that his party is not against the completion of the nuclear power plant but it does not want to see state money flowing into Mochovce to complete it.

"If the investor decides that completion is beneficial, it is his business, as long as the investor uses his own funds and does not ask for state guarantees," Harna told The Spectator.

None of the top three bidders for the shares, including favourite Enel, indicated that they would complete the third and fourth blocks of Mochovce.

Each promised only to explore the financial advantages of completion, and pursue building if feasible.

Privatisation commission member Aloiz Přidal said Enel requested one year to make its decision on the future of Mochovce.

Czech Republic's ČEZ, among the highest bidders for the shares, also excluded A1 and V1 blocks.

"We are offering a price that is fair to the seller. ČEZ will not walk the path of other foreign firms, such as [US oil futures company] Enron, who exaggerate prices and subsequently get into trouble," ČEZ spokesman Ladislav Kříž told news wire SITA.

Other concerns that emerged about the sale of Slovenské elektrárne have to do with Enel, if it is selected the winner.

First, Enel is 68 percent state owned. Second, Enel's claim to a majority in the company's board of directors, along with its desire to establish managerial control, will not be well received by members of parliament. Enel has said that the Italian state would sell 20 percent of its shares through the capital market by the end of October.

SMK's Harna confirmed that his party is not against the privatisation but it is concerned about the presence of the Italian state's investment in Enel, and who will eventually buy the state's shares. He added that energy sector is a very sensitive segment of the economy.

"The Italian firm has not proceeded as a strategic investor but rather as mediator of sale," said Harna.

However, KDH deputy chairman Július Brocka stressed that after the Italian state sells its shares in Enel, the investor will be acceptable to his party.

Enel offered the highest price for the 66-percent stake at €840 million (Sk33.6 billion). It also earned the highest final rating among bidders, achieving 90.4 points out of 100.

PricewaterhouseCoopers consultant Peter Mitka told the press that the Slovak privatisation commission based its decision on price. Mitka is the government's advisor on Slovenské elektrárne's privatisation.

"[Enel] can buy Champagne and put it on ice but not open it yet," Mitka told daily Sme, commenting on Enel's victory.

Enel's press department told The Slovak Spectator that it would be inappropriate to discuss the situation until Minister Rusko announced a winner.

After the winner is named, negotiations will start on the details of the privatisation of Slovenské elektrárne. Proposals will be submitted to the cabinet September 29 or October 6.