SLOVAKIA's Day of Remembrance for victims of the Nazi Holocaust and racial hatred came and went last week with little fanfare, unless you happened to walk past Saint Martin's Cathedral in Bratislava's Old Town September 9. There, beside the Holocaust Memorial, Israeli dignatary Reuven Rivlin and Slovak President Ivan Gašparovič together with Prime Minister Mikuláš Dzurinda placed wreaths at the foot of the memorial to remember the victims. 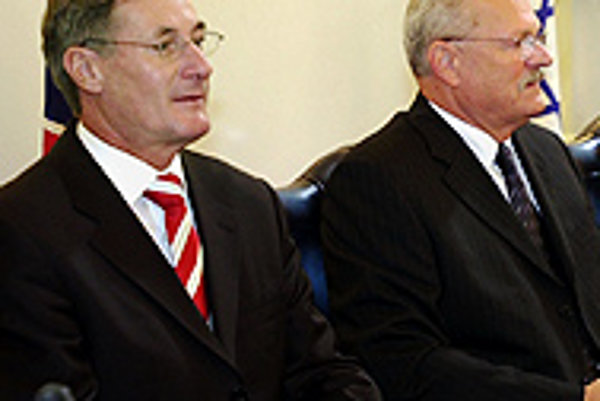 Font size:A-|A+0
SLOVAKIA's Day of Remembrance for victims of the Nazi Holocaust and racial hatred came and went last week with little fanfare, unless you happened to walk past Saint Martin's Cathedral in Bratislava's Old Town September 9. There, beside the Holocaust Memorial, Israeli dignatary Reuven Rivlin and Slovak President Ivan Gašparovič together with Prime Minister Mikuláš Dzurinda placed wreaths at the foot of the memorial to remember the victims.

The same day 13 Slovak citizens were named as winners of Isreal's top honour - the Righteous Among the Nations award. The awards were mostly accepted by relatives, since only three of the award winners are alive today.

September 9 marked 63 years to the day when the Slovak state under President Jozef Tiso's wartime pro-Nazi government issued the so-called 'Jewish code' that legitimised repressive and discriminatory measures against the Jews.

"When we saw the tragedy and misery of the fleeing and persecuted [Jews], we had to protect them," Anna Kuchárová-Bandžáková told Hospodárske noviny. She earned her award in the 1990s.

What Kuchárová-Bandžáková calls "the bravery of ordinary people, the sacrifice of true Christians" is in stark contrast to another reality: Tiso's regime not only agreed to deport Jews but also organised payment to Nazi Germany for every Jew deported. (Slovakia was the only country that paid Nazi Germany to deport its Jews.)

The Righteous Among the Nations award is a big deal. Candidates are considered only after a Holocaust survivor makes an official request to Israeli organisation Yad Vashem. If Yad Vashem finds supporting evidence or testimony that validates the survivor's story, it attributes the award.

Former Slovak President Rudolf Schuster formally apologised for Slovakia's role in the extermination of Jews during the Holocaust in February 2000. It was then that Schuster established Remembrance Day, on the date that Tiso's Nazi puppet government introduced the "Jewish code".

According Kuchárová-Bandžáková, who presides as the head of the Slovak branch of the Righteous Among the Nations, many positive stories remain untold.

"The deeds of my family and others were normal. Standing by would have been shameful," she said.

"The lowest estimate is that Slovaks rescued more than 10,000 Jews. I dare say that many more were saved. My family rescued 13," she told The Slovak Spectator.

"You have to understand that there were fewer young people helping Jews back then. Also, the Jews who were saved died [before making their request to Yad Vashem]," she added

There are 20,000 Righteous Among the Nations award winners worldwide; 442 are Slovak.

Even though Slovakia has the highest award recipients per capita than any other nation, many people feel the number is low. Israel did not start investigating Slovak cases until 1990.

"There are more righteous people dead than alive nowadays," said award recipient Valéria Vaculčiaková, explaining why the numbers seem low. She received the award together with her brother, Ľudovít. They are two of the three winners awarded September 9 who are alive today.

Why did Holocaust survivors wait five decades to ask Israel to honour their rescuers? Galit Ronen, Deputy Chief at the Israeli Embassy in Vienna, explained it to The Slovak Spectator this way: "I have spoken to some of the survivors and asked the same question: why so late? In many instances the explanation was that they could not face their past. But now that the survivors are old, they want to make their peace. They say, 'I want to give due respect and recognition to the person who saved my life while risking his,'" she said.

Among the awarded is Protestant priest Vojtech Schaffarovský, who saved a Jewish family by forging their conversion to Christianity in the church registry before the rise of the Nazis. Catholic priest Štefan Gallo also helped by looking after a Jewish boy.

Július Sivák, a teacher in Hustisovce, hid Jews in his home by day and at night escorted them across the border to Hungary.

An officer of the Hungarian Fascist army, Imrich Lockner from Jelšava, was honoured for refusing to transport Jews from a labour camp to a concentration camp. Instead, he transported them to Budapest where he arranged for their safekeeping.

The Mozolák family of Zlaté Moravce hid Jews under the floor in their house. Among the saved is the present Rabbi of Košice.

Valéria Vaculčiaková received the award together with her brother, Ľudovít, for bringing food to 11 Jews hidden in the mountains. They are two of the three winners awarded September 9 who are alive today.

Andrej Kvas, a senior in high school, hid a Jewish classmate and his family, the Friedmans, in his home.

"At the time I did not realize what horrors the Germans were carrying out on these citizens. Young Friedman was optimistic. Budapest had fallen, the Slovak National Uprising broke out - we were sure liberation was coming, so we were not afraid," Kvas told the SME daily.

"It was only afterwards, in prison [for hiding Jews], that I realised how helpless the average person is in the face of that kind of power," he said.

Kvas' father, a judge, managed to free him from prison. The Friedmans escaped to Switzerland.

Of the 137,000 Jews in pre-war Slovakia, 72,000 perished in death camps and another 40,000 died in the deportations from the southern part of the country, occupied by Hungary during the war.