The Long and Winding Road

NO OTHER pop group in the history of modern music has had a greater impact on contemporary culture than The Beatles. After more than 30 years since the band disbanded their music remains perhaps more popular than ever. For evidence, one has only to look at the number of copycat bands who have mushroomed since the 1970s in an effort to not only recreate The Beatles' unique sound, but also to look as much like the Fab Four as possible. 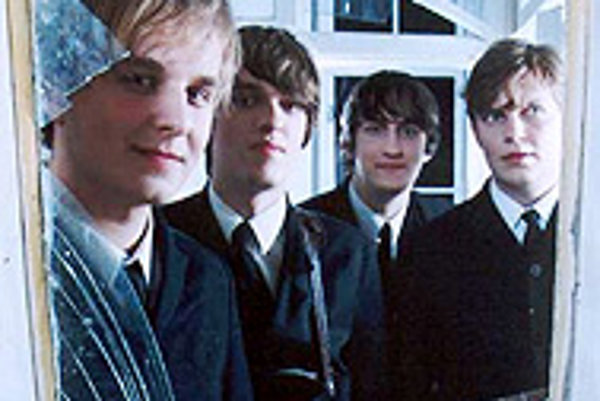 Font size:A-|A+  Comments disabled
NO OTHER pop group in the history of modern music has had a greater impact on contemporary culture than The Beatles. After more than 30 years since the band disbanded their music remains perhaps more popular than ever. For evidence, one has only to look at the number of copycat bands who have mushroomed since the 1970s in an effort to not only recreate The Beatles' unique sound, but also to look as much like the Fab Four as possible.

One band that has been masquerading successfully as The Beatles for almost a decade is the Slovak-Czech band Brouci.

Formed by a group of neighbours in the eastern Slovak city of Košice, they immediately aimed for as close an authentic interpretation of the Liverpool sound as possible.

The band members say that from the outset they approached the music of The Beatles with the same respect as would musicians performing classical works, paying as much attention to the models of the instruments as to their own stage image. Over the ensuing years they crafted the tunes and the style of their idols on stages across the world, culminating in topping 36 other tribute bands at New York's Beatlefest in 1998.

One of the people who went to congratulate them on their success was none other than the sister of George Harrison, Louise Harrison, who said that after so many years she had once again heard "the live sound of The Beatles".

In 2002, the band reformed and named itself Brouci (literally Beetles, in Czech) to incorporate the two Czech musicians who had replaced a couple of the original Slovak members.

Karol Najmik, and Viktor and Nikola Nižník remained as the Košice contingent, while Ondřej Skoumal, alias John Lennon, and Jan Chvátal alias George Harrison came on board as replacements, making the ensemble a five-piece unit.

The Slovak Spectator talked to Viktor Nižník, the band's bassist, otherwise Paul McCartney, to give an overview of the band's career.

The Slovak Spectator (TSS): Recently you won the International Festival of Revival Bands in Poland and now you are preparing for the local Dúbravské hody concert feast in the suburbs of Bratislava. What prompted this?

Viktor Nižník (VN): I moved here some four years ago and I really like the place. They are great people, and my wife and I have lots of friends here. Secondly, and just as important, Dúbravka citizens know how to have fun, like the Poles. In fact the audiences are very similar.

TSS: What will you serve them in music terms?

VN: We will dish up the classic and most famous hits from The Beatles repertoire, including the songs we won the Polish festival with. For example, from the album A Hard Days' Night we'll play Can't Buy Me Love possibly the title song [A Hard Days' Night], which I'm sure the audience will sing along to.

TSS: What else do you cover by The Beatles? Do you also touch on their later material?

VN: We play everything that can be played live. This means whatever the four of us, including our "fifth Beatle" - as we call our keyboard player - can play and sing. The "extra" Beatle in the line-up is there to help create the more lavish sound The Beatles performed with orchestras and greater instrumentation. We also play new things, such as Free As a Bird; sometimes we even dare try Real Love.

TSS: Why did you originally choose to imitate The Beatles?

VN: Too many people have asked us this question over the years, so we started to invent fictitious and funny stories about it.

But the truth is closer to this: The history of the band goes back to 1995, when me and some neighbours got together during a New Year's Eve celebration and started to jam it up in a living room.

It was so great we agreed to go to a rehearsal a few days later at our drummer's place. In the beginning we only played our own things, but as we sang in front of our parents and friends, they encouraged us to try and play some songs from The Beatles catalogue, because they said we have similar voices. So we tried it, found it worked, and stuck with it.

As it happened, we received many concert offers and so the whole affair continued for several years with quite a bit of success, such as winning the New York Beatlefest in 1998, and performing in [The Beatles] musicals in Bratislava and Prague theatres.

TSS: What other processes did you have to go through to look like The Beatles - apart from the music?

VN: Some of us underwent plastic surgery [laughs].

Concerning the music, it took many hours of rehearsing, especially the vocals.

As we learned to play The Beatles' songs we scrutinised every single note they used, so that it sounded as much like their work as possible. As for the looks - well we also like to bring along something of ourselves.

TSS: There have been many pseudo Beatle bands throughout the world. To what do you attribute your success?

VN: Well, personally, many people have told us that we know how to capture the essence of The Beatles with our energy and that something radiates from our performances. At the Polish festival, people said that this is what the other bands were missing.

TSS: Have you met other Beatles tribute bands in Slovakia who may have influenced you?

VN: We would like to, but we don't know of any such bands. The Beatboys no longer exist, but we meet up with Meky Žbirka from time to time at various events. It was he who mostly influenced us at the start.

TSS: What about meeting a "real" Beatle?

VN: That's our big dream. We were close to it when Paul McCartney had his concert in Prague. That time [the organising] agency introduced us to his management to inform him that some band called Brouci exists and plays his music. So, at least we have had some connection.

TSS: What do the Brouci do outside the band? Do the Czech-Slovak Beatles sometimes turn into other bands, let's say the 4 Non Blondes?

VN: Ooh, 4 Non Blondes we'd rather not, but we like their music.

Although we are known for performing as The Beatles, we enjoy playing a lot of psychedelic music too, and we wouldn't rule out doing the Rolling Stones. But outside the band each of us leads his own private life.

TSS: You have gone on record as saying that you have started working on your own music. When will it be released?

VN: Yes, our own work...We are happy that we have our own material, if we can call it that. At the moment we are in a period of negotiations. It is difficult to please both the listener and the publisher at the same time, so we try to find the "golden middle route". Then we will start the ball rolling.

Brouci will perform in Bratislava during the Dúbravka hody feast within the Saturday, September 25 programme, starting at 15:00 at the Dom kultúry Dúbravka (Dúbravka Culture House) on Saratovská 2/A.