Fahrenheit 9/11
Starring: George W Bush, Michael Moore, the American people, the Iraqi people, the bin Laden family
Directed by: Michael Moore
Running time: 126 min
Rating: 6.5 out of 10
THE PRESIDENT of the United States warns that the world is full of terrorists determined to destroy the West and explains that we must hunt them down. 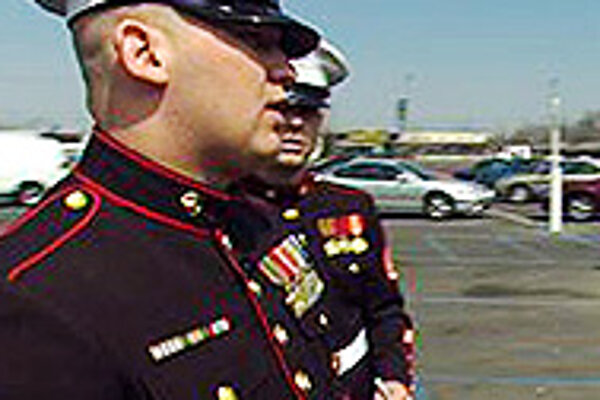 THE PRESIDENT of the United States warns that the world is full of terrorists determined to destroy the West and explains that we must hunt them down. After glaring into the camera to stress the seriousness of his statement, he turns, lines his golf club up with the ball and says, without a hint of self-awareness, "Now watch this drive."

A smiling, bespectacled man enthusiastically shakes hands with Saddam Hussein, thus solidifying a large-scale weapons deal. Two decades later, this man, now the US Secretary of Defense, declares Saddam one of the most dangerous men in the world, insists that the Iraqi dictator has weapons of mass destruction that he intends to use against the American people, and strives to overthrow him.

Is this a Marx Brothers movie? Apocalyptic Orwellian sci-fi? No, it's the present-day US, and the characters are George W Bush and Donald Rumsfeld, respectively. They and their comrades star in Fahrenheit 9/11, the latest film from Michael Moore, the ubiquitous self-appointed champion of the American left and gadfly of the American right.

One of the primary reasons for Moore's ubiquity is his cinematic style: The camera trails him as he hounds powerful businessmen, demonstrates his concern for the working class, and performs attention-grabbing stunts.

Fahrenheit 9/11 is a different sort of film. The good news: There's less Michael Moore. The bad news: There's less Michael Moore. He recognises that his subject in this film - President Bush and his administration - provides so much ripe, cartoonish material that too much of the director and his omnipresent baseball cap would merely be a distraction. However, Moore is often what holds his films together. True, his holier-than-thou attitude can be tiresome. And it can seem like he is more committed to promoting himself and his commitment to a cause than to the cause itself. But his entertaining presence can keep his films centred, even as their scope expands. Fahrenheit 9/11's scope is huge. It covers the 2000 US presidential election debacle, 9/11 (the best depiction to date), the Bush family's connections with Osama bin Laden's family, the current war in Iraq, military recruitment tactics, and too much more to mention.

All of this can be difficult to keep track of, as the movie veers in and out of effectiveness. It has some hilarious footage, much of it of Bush and his administration when they think they're off-camera. It benefits from some engaging mystery-style storytelling and unflinchingly portrays the devastating effects of the Iraq war, both in Iraq and in the US. Moore does not really bring new information to light, but he covers much that the mainstream US media has left largely untouched. In this sense, Fahrenheit 9/11 is an extremely important film, as it invites its viewers to ask questions that might not otherwise occur to them. But Moore is just as liable to manipulate the facts as those he is battling. And he is, once again, a major player in the film. Though he appears only sparingly, he provides a constant voiceover that keeps you aware of his oh-so-important role in the proceedings. And his clear animosity for Bush demonstrates that he is attacking the man just as much as the policy, forcing one to wonder whether he really is any more trustworthy than the president and his cronies.

Fahrenheit 9/11 gives its viewers much to be angry about and Moore's popularity gives him unprecedented access to people, video footage, and information. But his blatant agenda undermines itself: He wants to create a frenzy of hatred against Bush every bit as powerful as the frenzy of fear that he chastises the president and his administration for creating.