A RARE engineering feat captured media and public attention last weekend in the Slovak capital. The fifth bridge over the River Danube, which has been under construction for nearly two years, was eased into place.
Instead of building the twin-arch highway bridge over the river, construction crews assembled it entirely on the left bank. 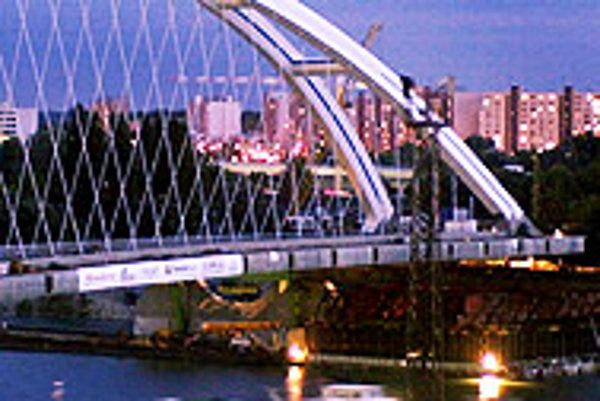 Font size:A-|A+0
A RARE engineering feat captured media and public attention last weekend in the Slovak capital. The fifth bridge over the River Danube, which has been under construction for nearly two years, was eased into place.

Instead of building the twin-arch highway bridge over the river, construction crews assembled it entirely on the left bank. More than 200 meters long, 36 meters high and 7,400 tonnes, the bridge is perhaps the largest of its kind in the world to be "turned".

A company from the Czech Republic managed the manoeuver, which resembled a door swinging shut on its hinges. First, site crews mounted one end of the massive bridge on a special bearing. Then, with help from four freight boats and the Danube's swift current, the team slowly tugged the opposite end of the bridge to its final position on the far bank.

"It was a unique operation. A bridge in Seville was turned in a similar way but that bridge was shorter by half and much, much lighter," said project manager Miroslav Maťašík.

Although the initial turning of the bridge was planned for Saturday morning September 18, technical problems kept thousands of spectators waiting in vain.

By evening the causes for delay were solved. However, the threat of bad weather and increasing employee fatigue forced the company in charge, Hutné Montáže Ostrava, to postpone the turning by one day.

Sunday morning the viewing platforms on both banks of the Danube River thronged with people. Nearby, police on Prístavný and Starý bridges kept the pedestrian sections moving along. Weekend water transport had stopped, except for that one stretch of water separating the city centre from Petržalka.

There, four freight boats manoeuvered the 7,400-tonne section of bridge while crews stood by and spectators watched. Moving one meter an hour, the bridge took nine hours to reach the other side, the SITA news agency reported.

The municipality of Bratislava updated its website every 15 seconds with pictures of the turning. The site had so much traffic over the weekend that at times it was inaccessible.

Not to be outdone, local media provided updated coverage every hour.

Ladislav Csáder, the director general of the investment company Metro, a.s., gave an indication of the amount of material required for gross construction.

"There are 317 kilometers of welds on the bridge; 21 kilometers of ropes went into hinge suspension. In total, we used 27,000 cubic meters of concrete. And we imported 2,300 square meters of granite from China for tiling," said Csáder.

After completion, the bridge is expected to weigh 8,000 tonnes.

The building site itself required massive reworking. Construction crews removed 8,700 tonnes of contaminated soil - the remains of an oil refinery. Half that amount, about 4,800 tonnes, was de-contaminated and crews are preparing to bring it back for filling. Almost 4,000 tonnes of original soil was too polluted to save and will be disposed of properly.

Total construction costs are estimated at Sk3.6 billion (€90 million). The European Investment Bank is providing of 50 percent of the funds.

This new bridge over the River Danube will improve transport between the Bratislava district of Petržalka and the city centre, and is expected to open in May 2005.