THE POPULAR Slovak tabloid, Nový Čas, embroiled itself in an unprecedented media scandal when it ran an indecent photo of naked men in its September 17 issue. A staff photographer took the picture September 16 during a special media presentation of The Full Monty, a local theatre's production of Terrence McNally's Broadway hit of the same name.
The theatre that staged the production, Nová Scéna, is seeking retribution. 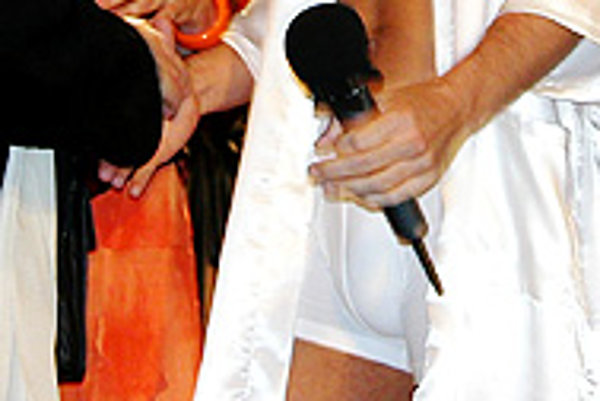 Font size:A-|A+0
THE POPULAR Slovak tabloid, Nový Čas, embroiled itself in an unprecedented media scandal when it ran an indecent photo of naked men in its September 17 issue. A staff photographer took the picture September 16 during a special media presentation of The Full Monty, a local theatre's production of Terrence McNally's Broadway hit of the same name.

The theatre that staged the production, Nová Scéna, is seeking retribution. An offended theatre director is demanding an apology from Nový Čas publishers for "savaging the actors' dignity" and damaging the reputation of her theatre and the production. Nová Scéna claims that photography is explicitly banned from its performances.

The picture by Nový Čas photographer Tibor Vecan captures the final scene in which the actors, representing a group of unemployed men from Sheffield, England, decide to earn quick cash by stripping bare in their own version of a Chippendales act.

In addition to the photo spread, Nový Čas included a cardboard insert as part of a Pepino condoms advertising gimmick. The insert, called the "calibration set", is a device for measuring penises.

The photos and the calibration set were published two days before Nová Scéna's scheduled premiere.

According to a statement from Nová Scéna, photographer Vecan took the photo "despite a clear ban on photography, which all audience members and journalists were made aware of" before the performance started.

The statement pointed out that theatre audiences could not see the actors' naked parts in the way that the Nový Čas picture suggests. Nová Scéna maintains that the photographer used a special flash to accentuate the nudity.

Nový Čas defended itself saying that photography was not expressly banned.

Stanislav Klikušovský, the deputy editor-in-chief of the daily, told The Slovak Spectator that his newspaper would not comment on the case beyond what it already stated in its September 18 issue.

"Our statement remains unchanged," he told The Spectator.

Nový Čas included an editorial in its September 18 issue that said, "Nudity is natural, but if we hurt you with this photo, sorry." It went on to praise Vecan's artistry.

"It is a testament to the craftsmanship of the Nový Čas photographer that he managed to capture this moment. Other journalists had a similar chance, especially because the [theatre] organisers did not ban taking pictures of any scene of the musical," the editorial explained.

Nový Čas publishers were convinced that the actors would identify with their theatrical roles and have no problem with their nudity revealed in public. The actors were asked to sign model releases.

At a September 17 press conference, Nová Scéna Theatre Director Wanda Hrycová said that on behalf of the theatre, the actors and the authors of the piece, she protested against "the unscrupulous action of Nový Čas, which, in an effort to create a tabloid sensation, has sunk to this kind of act."

Hrycová added that Nový Čas's judgment is "in major conflict with all the rules of journalism and ethics, and interferes grossly with the reputation and virtue of the actors, as well as the reputation of the cultural institution Nová Scéna".

The theatre director is determined to use all available legal means "to achieve maximum possible redress for the disgrace and savaging of [the actors'] dignity, and their human and professional virtue".

Nová Scéna is demanding an apology from Nový Čas publisher, the Swiss group Ringier, a ban on further dissemination of the photo, and compensation for immaterial damages to the actors.

Although the controversy primarily surrounds the indecent photo, a dispute has emerged regarding the text accompanying the photo.

The September 17 photo runs under Erika Vincoureková's by line. The journalist said the following day, however, that she did not write the story. In fact, she had already handed in her notice.

"My morals do not correspond with their morals," she told the press. Vincoureková intends to write a book about Nový Čas entitled The Kingdom of Filth.

According to Peter Zeman, the chancellor of the Slovak Syndicate of Journalists (SSN), a national media guild, the Nový Čas act was a "gross transgression of the journalistic ethics code".

Zeman said that SSN would submit a motion to the press watchdog authority, the Press Council, to look into the case and take measures against the newspaper if necessary.

"Such journalism damages the reputation of the journalist community in general. We have to distance ourselves from such practices," Zeman told The Slovak Spectator.