Waiter - I've found a meteorite in my soup!

Café Soleil
Where: Markušovského 509, Štrba
When: Monday-Sunday 16:00-24:00
Reservations: No
English menu:Yes
Contact: (Božena Neuhausová) 0903/619-959
TUCKED AWAY under the foothills of the majestic High Tatras lies the village of Štrba. Blink your eyes and you'll probably miss it 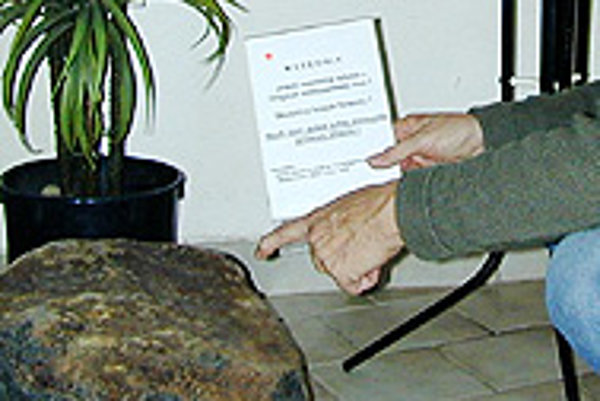 TUCKED AWAY under the foothills of the majestic High Tatras lies the village of Štrba. Blink your eyes and you'll probably miss it. Rest up awhile and you are quite likely to come across the tiny Café Soleil. From the outside there seems nothing remarkable about the place, or anything particularly different from many other Slovak hostelries. That is, until you enter. What is immediately apparent is the rather peculiar atmosphere it conjures, derived from a sort of visual disorientation. Then as your eyes become accustomed to the surroundings, you begin to see why. The place is a clutter of oddly interesting objects. And none less so than its owner Friedrich W Neuhaus. Originally from Germany Herr Neuhaus is a collector, or more to the point, a hoarder with a penchant for historical artefacts and anything that falls out of the sky. Everything in his cafe, from an 83-year-old mineral water bottle, to his prized chunk of meteorite, provides a constant talking point among the curious locals, and anyone else who happens to stray inside.

Neuhaus arrived in Slovakia by chance. Being a keen hunter his original plan was to go on an expedition in deepest Africa, but fate intervened and he was sidetracked to Czechoslovakia.

"At first I was scared about coming to a communist country, but soon found the people very nice and hospitable," he said.

So taken was he with the Slovaks that he eventually married one, and off they went to start their married life in Germany. But after a couple of years in his homeland they decided to return to Slovakia, bringing with them the Neuhaus collection of rare artefacts. They set up home under the Tatras and two years ago, in keeping with his wife's family background, they bought the Café Soleil.

"I come from a gastronomic family," Božena Neuhausová explained. "My grandpa built a tavern and pension in Štrba during World War II that was the first of its kind in the region. Even though I studied languages, I have always been inclined towards gastronomy. But the café was built and furnished by my husband, it's all his work."

And her spouse is extremely proud of his collection of rare oddities. "Each article has its own unique value. It's hard to tell which one is the most precious," he said, adding that one item in particular generates the most curiosity among his customers - his cosmic rock. The 100-kilogram meteorite, almost half a metre in diameter, was found in the Westerwald region of Germany in 1930.

"When my family were working in their fields they ploughed up this weird stone. At first glance it was immediately different than other stones," recounted Neuhaus. "They analysed it at the Justus Liebig University in Gießen and proved that it really was a rock from outer space. It's a mixture of various metals, that's why it is so heavy. And it is black because it got burned when entering the earth's atmosphere."

The meteorite happens to be allegedly invested with other metaphysical properties - luck.

"We get locals and foreigners who come here, and they all want to touch the meteorite for luck. We also touched it, and everything worked out well," proclaimed the happy couple.

Elsewhere in the café his other numerous earthly objects attract much attention, ranging from a pre-historical carving tool to an early radio. Alongside ancient Celtic receptacles there is a 19th century tin cup with a glass base through which mariners used to spy on their mistresses. A measuring decanter from the Austro-Hungarian period looks decidedly out of place next to a set of slave's manacles.

Patrons can also donate their own possessions to the café providing they meet with the proprietors' approval. "It has to be interesting, curious and old. I have newer things too, but these are not attractive because they lack any story or history," Neuhaus said with the air of a museum custodian.