Jamboree drums up a new concept

AN ANNUAL event that pairs drummers of distinctly different genres will kick off like it always has. Following a week-long workshop in the Czech Republic, where musicians from various countries drummed up a concept to take on tour, the jamboree will bang out a unique rhythm in cities across the country. 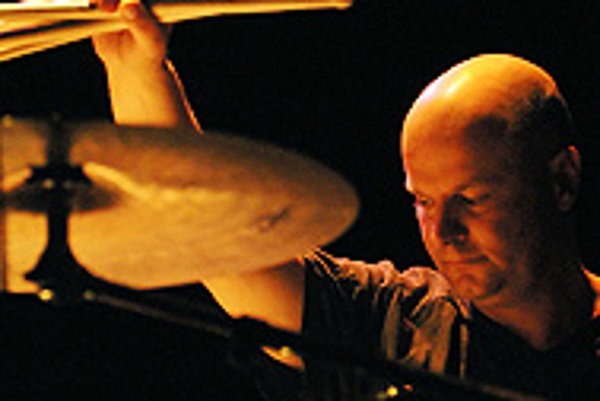 Font size:A-|A+0
AN ANNUAL event that pairs drummers of distinctly different genres will kick off like it always has. Following a week-long workshop in the Czech Republic, where musicians from various countries drummed up a concept to take on tour, the jamboree will bang out a unique rhythm in cities across the country. This year, however, the one-of-a-kind troupe will bring its festival over the border into neighbouring Slovakia before culminating in Prague.

This year, Jamboree of Drummers 2004 features 10 musicians. Half are Czech and represent the "home" scene. The other half, drummers and percussionists from Africa, America, and England, round out the sound.

"We have ventured to create a new musical event, and to launch a new tradition of a one-instrument-only festival," said the festival's organiser, Romek Hanzlík.

Hanzlík is passionate that the public realise that percussion instruments are not only drums but also melodic instruments, such as the marimba or xylophone. "The festival's purpose is not to showcase current drumming trends but to reveal the whole range, colour and variety of drumming instruments," he said.

Slet bubeníku, or Jamboree of Drummers, was originally conceived as a one-off event. But according to Hanzlík the impact of the inaugural festival in 2002 "was so radical" that his agency decided to make it an annual affair.

This year Hanzlík's agency, AMP, is organising Slet bubeníku for the third time. The drummers are scheduled to arrive in Bratislava and play at the Babylon Music Club on September 30. They represent a wide range of styles, backgrounds and ethnicities.

"Each of the musicians brings his or her own skills, roots, and musical thinking into the project," Hanzlík explained.

Despite the wide scope of musical genres, from jazz and classical to alternative and ambient, Hanzlík said the musicians "have no problems harmonising a mutual concept once they establish a shared goal and vision".

Czech musician Pavel Fajt, along with Miloš Vacík and Alan Vitouš, create the core of the international workshop. Others are guest drummers, invited to participate based on their contribution to the field, their interesting or innovative approach, or, as the case may be, their ability to accept what the organisers can afford to pay.

Fajt, known as avant-garde rock band drummer for Dunaj and Pluto, will play the dholl, a drum from India, among other exotic sound-making devices. His style is celebrated in music events worldwide.

The multi-instrumentalist and composer Vitouš, who has cooperated with European jazz greats, will drum African, Australian, and American Indian beats.

Miloš Vacík, another multi-drums-player, will show off his specialty in drums from Cuba, Brazil, and western Africa. An instrument collector, Vacík is known too for his stints with Šum Svistu and Pražský Výběr.

A young Czech "intuitive" drummer and multi-percussionist, Miloš Dvořáček, will turn his drumming style to simpler, more "primitive" techniques. The result promises to be an inventive harmonic, adding flavour to the assembly's central performance.

Others in line include composer Ivan Acher, famous for writing musical scores as well as playing in bands. His signature is standing behind a mix board, where he plays various boxes and cables. Currently Acher performs with Fajt's latest band, Autopilote.

American Chris Cutler is part of the overseas contingent. Presently living in England, Cutler is considered one of the most unique and inventive drum and percussions players in the world. He has played with Henry Cow, Art Bears, and News from Babel.

Also in the pack is energetic drummer Jim Meneses from Philadelphia. Meneses "jammed" with Fajt in 1988 at the French Mimi festival - a collaboration that resulted in a European tour and album.

Hearn Gadbois, who started his career in the Middle East playing congas in jazz and funky bands, will play his hand-made instruments. Gadbois made it big in New York's downtown scene in the late 1980s after picking up the Indian percussion technique of hand and foot playing. He has made records with Patti Smith, Meredith Monk, and Yoko Ono. Gadbois founded the School of Rhythm in Prague.

Elvis Kititi, a multi-instrumentalist from Congo, will demonstrate why his former African dance band, Vox Populi, became so popular. Kititi moved to the Czech Republic in 1998 where he founded a new band, Tshikuna.

A young female drummer and singer, Tereza Petrášová, is the sole female representative of this year's event.

Slet bubeníku in Slovakia will take place at the Babylon Music Club in Bratislava, Karpatská 2, starting at 20:00 on September 30. Tickets (Sk250) are on sale at Dr Horák, Medená 19. www.drhorak.sk