SLOVAKIA has experienced its first known serious incident of exposure to a potentially lethal military gas.
Police confirmed that 51 employees at the post office on Vlastenecké Square in Petržalka, Bratislava, were hospitalised on September 23 after inhaling the poisonous gases, phosgene and chloropicrin.
Fire fighters and a rescue team evacuated some 100 people from the post office, many of whom showed the effects of the highly toxic gas. 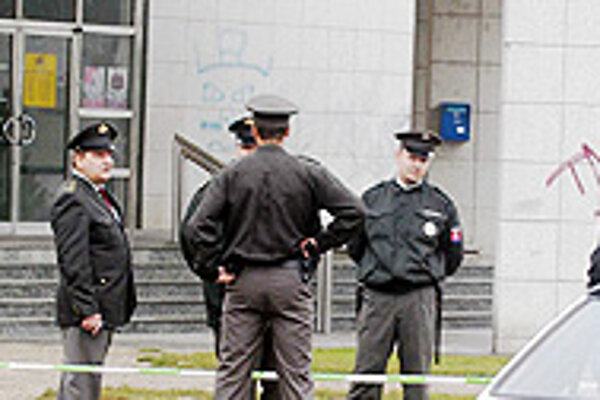 Police confirmed that 51 employees at the post office on Vlastenecké Square in Petržalka, Bratislava, were hospitalised on September 23 after inhaling the poisonous gases, phosgene and chloropicrin.

Fire fighters and a rescue team evacuated some 100 people from the post office, many of whom showed the effects of the highly toxic gas.

Most of the victims were eventually released from the hospital with doctors stipulating that none of the employees were in any life-threatening danger.

The Office of Civilian Protection also said that inhaling the gas in such small quantities could not have caused any serious health problems.

Four days later on September 27, the same post office in Petržalka was again contaminated by the chemical and closed. The following day it reopened to the public.

Interior Minister Vladimír Palko, on September 30, said that the incident could not be classified as a terrorist attack.

"I would be very unhappy if we allowed the creator of such a substance to exaggerate our fears and move us into unwarranted hysteria," Palko told the press.

After the first incident, police were reluctant to provide information on the nature and type of gas involved in the incident, which can be manufactured domestically.

On September 28, spokesman of the Interior Ministry Boris Ažaltovič announced that the investigators did not want to publicise information known to the police as a matter of protocol.

"The police must first ensure that the lives and the health of citizens are protected. If there is any suspicion that a crime was committed, the police's role is then to secure the site. Only then is information made available," Ažaltovič said.

Police have started investigating the possibility of a deliberate act of contamination. If any party is charged and found guilty of a willful attack of this nature, they face a possible prison sentence of up to eight years, or 15 years if the criminal act is repeated, news wire TASR reported.

Days after the incident, the spokesman for the Slovak Intelligence Service (SIS), Vladimír Šimko told SME that his office had not ruled out the possibility of a terrorist attack.

Phosgene, a highly toxic substance, was first used by the Germans during the battle of Verdun in 1917. Over exposure to phosgene can be fatal, causing death by pulmonary oedema. Immediate symptoms include coughing, nausea, vomiting and headaches.

Chloropicrin is used primarily as a preplant soil sterilant against insects and fungi. As with phosgene it was also used in World War I as a chemical warfare agent. It immediately affects the eye fluids, causing severe lachrymation. Over exposure to chloropicrin can cause death through pulmonary damage.

According to official records, no plant manufacturer or company produces these chemical substances in Slovakia.

Court psychologist Svetozár Droba told the daily newspaper SME that, in his opinion, the perpetrator must be a psychopath. He said that the perpetrator could have killed people if he had used a higher concentration of the gas, but that he only wanted to spread fear.

Employees at the post office are reluctant to talk to journalists because of the risk of losing their jobs.

Politicians and safety experts have been critical of the police embargo on information.

Matúš Korba, an analyst with the Centre of Security Studies, told SME that the Interior Ministry should have published all available information about the incident in order to avoid speculation, which is a direct consequence of withholding information.

The head of the parliamentary defence and security committee, Robert Kaliňák, said that although the public has a right to information, in this case the police performed their duties correctly.