Man on the Moon returns

THE LAST man to walk on the moon, Andrew Cernan, was welcomed home Monday, where he was received by Slovak President Ivan Gašparovič. A self-described "ordinary man", the American astronaut of Slovak origin arrived in Bratislava to preside over the grand opening of a new exhibit, Man on the Moon.
This is Cernan's third visit to Slovakia. He previously visited in 1974, and then again in 1994. 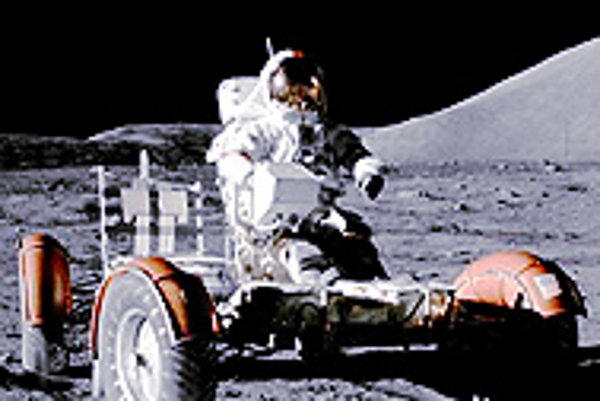 Font size:A-|A+0
THE LAST man to walk on the moon, Andrew Cernan, was welcomed home Monday, where he was received by Slovak President Ivan Gašparovič. A self-described "ordinary man", the American astronaut of Slovak origin arrived in Bratislava to preside over the grand opening of a new exhibit, Man on the Moon.

This is Cernan's third visit to Slovakia. He previously visited in 1974, and then again in 1994.

After collecting an honorary doctorate at the Slovak University of Technology, three-time moon veteran Cernan went to Bratislava Castle, where an exhibition of photographs show his expedition to the Moon in 1972, in which Cernan was captain of the spaceship Apollo 17.

The exhibition contains a dozen large photographs and at least 50 smaller ones taken from the NASA archive in Houston. The photographs show preparation scenes as well as shots snapped from Apollo 17 during its moon voyage.

Man on the Moon also includes objects connected with the Apollo 10 and Apollo 17 journeys. Cernan had previously donated these objects to the citizens of Slovakia's Kysuce region, where Cernan's grandparents were born.

On the Shoulders of Giants, a documentary featuring original film footage from both the Apollo 10 and Apollo 17 expeditions, accompanies the exhibit, which runs through February 15.

The multimedia exhibit also launched the publication of a 96-page biography on Cernan. Live One's Life, by Marián Pauer, is based on detailed conversations between the author and Cernan in 2003.

The biography explores Cernan's attitudes and views on life, as well as providing a history of space exploration. Pauer goes into the genesis of the American space program, and his book supplies numerous historical photographs.

"The first steps on the Moon were a moment that nobody can take away from me. I still remember that moment," said before opening the exhibition at a press conference in Bratislava's Primaciálny Palace Cernan.

"I am an ordinary man who got a chance to fly into outer space. But I still dress the same way, I still bleed the same way and I have to pay for food just like everyone else," Cernan said.

What was the most profound moment in his life? Cernan believes it was when he stood on the Moon's surface for the first time and looked at the Earth.

"I was totally taken over by that moment," he said.

Cernan hopes that his visit to Slovakia will inspire young people to explore space. "It is my duty and responsibility to inspire them, so they can have such dreams as I did when I was young."

Directly after his return from the Moon, he started looking for new challenges, but he found it difficult to find anything equal in importance.

I am older and wiser now. I have nine grandchildren and they are my challenge," Cernan said during the opening ceremonies.

Born March 14, 1934, in Belwood, Chicago, Cernan is the direct descendant of a family from Slovakia's northern region of Kysuce.

Cernan's ancestors, with the original surname Čerňan, left Slovakia for the United States at the beginning of the Great Depression. Cernan was brought up to love Slovakia, and he has always acknowledged his Slovak roots.

In October 1963 he became a member of the third group of NASA astronauts. He flew to the Earth's orbit for the first time as a pilot of Gemini 9, and he became the third person in history to walk in space.

A small planet (No. 12790) discovered at the Czech observatory Kleť is named after Cernan, as is a museum in Chicago - The Cernan Earth and Space Centre.

A Slovak primary school in Vysoká nad Kysucou was christened after the astronaut in 1994 as the Elementary School of Eugene A Cernan. Captain Cernan holds the highest honour of the Slovak Republic: the Order of the White Double Cross of the Second Class.