Democrats and Republicans take a Slovak point of view

FAR from the boiling atmosphere in the US preceding September 30's televised presidential debate, two groups representing America's biggest political parties made their contribution to the ongoing presidential campaign.
At a round table event hosted by The Slovak Spectator, the local chapters of Democrats Abroad and Republicans Abroad sat down Wednesday morning to hash out some of the election year's most burning topics - from a Slovak point of view. 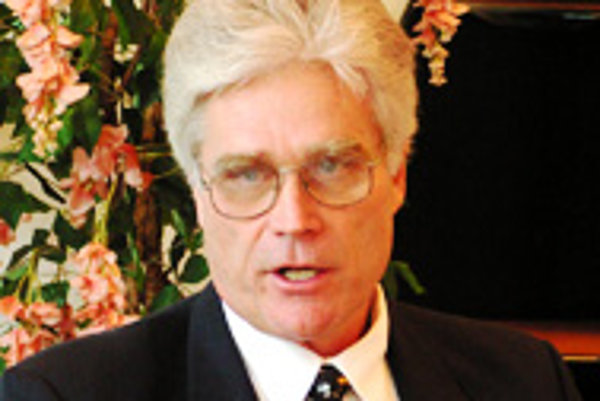 representing America's biggest political parties made their contribution to the ongoing presidential campaign.

At a round table event hosted by The Slovak Spectator, the local chapters of Democrats Abroad and Republicans Abroad sat down Wednesday morning to hash out some of the election year's most burning topics - from a Slovak point of view.

The talks lasted well over an hour, with thoughtful discussion on themes popular within the Slovak political arena: tax reform, military spending, healthcare, affirmative action and foreign policy. Below is a peek at some of the most salient points made on US tax policy and military spending in relationship to the Slovak Republic. Next week's Focus will feature talking points made on healthcare, affirmative action and foreign policy.

The Slovak Spectator (TSS): Slovakia has been praised for its progressive tax reforms and 19-percent flat tax. The reform also attracted severe criticism from the French government and other EU founding member states. What is your opinion about Slovakia's tax policies? And what is your group's position on US tax policies?

FAR from the boiling atmosphere in the US preceding September 30's televised presidential debate, two groups Bill Quam, chair of Democrats Abroad, Slovakia (BQ): The Slovak government's attempt to simplify the tax code is admirable. I think the tax system in the US is too big, too cumbersome, and too complex. This is the danger when a government tries to suit everyone's pet project within the tax code. Taxes need to be simplified, but it needs to be done so that people who are more able to pay are paying their proportionate share of the burden.

The Democrats' position on flat taxes is that they tend to be regressive. In other words, they often hit the weakest members of society the hardest - those who are the least able to pay, namely the undereducated, the elderly, anyone on fixed incomes. In the end, flat taxes are consumption taxes. Unlike income taxes, which are proportional to your income and ability to pay, flat taxes ask more from those who have less to give.

Jan Surotchak, member of Republicans Abroad, Slovakia (JS): The [US] tax code is extremely complex. The average [US] citizen doesn't understand the majority of it at all. The question is how do you simplify tax laws? I, for one, admire what the Slovaks have done.

The flat tax is not unique, of course. Flat taxes certainly have been tried in other countries around the world and they have worked - Hong Kong and Russia are prime examples. Flat taxes essentially remove tax loopholes, which is why they are so effective at simplifying the system.

The Slovak government's tax reforms have eliminated a lot of taxes, which everyone agrees are unfair - gift tax, real estate transfer tax, inheritance tax. The Slovak reforms are essentially moving in the same direction as the US President's tax reform, which was recently passed. Senior officials in the US government have praised Slovakia's tax reforms.

BQ [In response to JS's assumption that "everyone agrees" certain taxes are unfair]: The estate tax impacts a very narrow segment of society. Less than 5 percent of the US population is affected by estate taxes. Let me put it in perspective: The collective income of the top 14,200 households in the US is greater than the collective income of the bottom 96 million households. Just as Bratislava cannot ignore the eastern regions of Slovakia, where unemployment rates are 30 to 50 percent, the US cannot ignore the inequalities within its own population. You have to ask, who is shouldering a disproportionate amount of the [tax] burden?

Hank Jones, chairman of Republicans Abroad, Slovakia (HJ): People don't seem to understand the tax law in the US, and as a result, there's abuse. We trust people with their own money more than we trust government with their money. The Republican platform is to put money into people's pockets so they can spend it the way they choose. And I think Slovakia's tax reform does much the same thing.

HJ: The US is the largest donor nation in the world. Our friends in the EU often criticise us that our percentage of aid [per GDP] does not match theirs, even though the dollar amount [we give] is higher. This is a narrow view.

I don't think that tax cuts will affect aid in any way, shape or form. In fact, tax cuts put more money into people's pockets, and Americans have always been charitable givers.

I think it would be wrong to suggest there's a correlation between cutting taxes and cutting foreign aid.

Asieh Nassihi Javan (ANJ): Even though you are putting money into people's pockets with tax cuts, there is a big chance the money will not be spent on charitable purposes. The tax code essentially encourages wealthy people to handle their finances in such a way that benefits charity - and in that sense, benefits us all. In order to take advantage of certain tax breaks, for example, you have to make some new investments or donate some money to charity.

TSS: According to recent draft budget estimates, Slovakia's defence spending next year should reach Sk26.7 billion (€948 thousand), or 1.9 percent of the nation's estimated GDP. NATO requests that new EU members spend at least 2 percent of their GDP. Do you think Slovakia needs to increase its military spending? And does a small country like Slovakia need effective armed forces? What impact would increasing US military spending have on its foreign policy?

HJ: We have a military that has become stretched through various commitments around the world, and to maintain our effectiveness we need to increase spending. We also need to develop programmes to tailor military functions in ways that we are already transitioning towards. I don't see a tremendous impact [on foreign policy].

TSS: The deployment of a ballistic missile shield was a controversial issue in the last US presidential campaign.

HJ: Yes, it was an issue, and I think it will be for some time. I think there's indication of that recently, in view of the technological advances by Iran and North Korea, where North Korea has missiles capable of hitting the western coast of the United States and Iran has missiles capable of hitting American soldiers in Iraq, Afghanistan and Israel. Both nations have active nuclear weapons development programmes. So wouldn't it behove our government, if the resources were available - and they are - to seek a way to protect our citizens and citizens around the world from rogue nuclear missiles? I don't think you can put a price on that.

ANJ:But extensive research indicates that ballistic missile shields don't work. There's no guarantee that it can deter rogue nuclear missiles, let alone Mylar balloons, and the price to develop [a shield] will be a lot higher than anticipated. I think diplomacy is the best way to build this country up.

BQ: This is the whole foreign policy question - to engage with the international community, be it the UN, NATO or other multilateral organisations, to solve these problems, to create pressure and develop a new way of speaking in diplomacy, so we don't come across as the "ugly Americans", which is the view of many people in the world. We're perceived as engaging in "cruise missile" diplomacy to take care of issues that should be left to the diplomatic table.

JS: Slovak Defence Minister Juraj Liška was in Washington last week and had a series of meetings with senior officials in the US government. One of the events organised for him was a speech at the National Defence University. One of the things he said in his speech was that the issue now was to move from defence of territory to defence of interests. It seems to me that this is a point on which the United States and the Slovak government agree very closely.

Defence Minister Liška, in his statement at the National Defence University, agreed with this concept, which is why the Slovaks have been such excellent allies of the United States. Whether in Afghanistan or Iraq, or the other peacekeeping missions the Slovaks are involved in, in Kosovo and other places around the world, they've had an excellent record of contributing to the defence of our common interests. The Slovak government spends 1.9 percent of its GDP on defence - OK, so it's a tenth of a percent short of the 2 percent goal that Slovakia has signed up for in NATO. On the one hand you could say that the Slovaks have fallen short. But they're well ahead of some other nations that have far greater resources, such as Germany. So my question would be not so much whether the dollar figure is enough, but whether what we spend, as Slovaks or Americans, is sufficient to defend our mutual interests and values.

BQ: Take the 40 percent increase in the military budget in the last four years. I say we need to use the money we spend more effectively. We simply don't have enough people on the ground. In Iraq, the United States government relied on foreign nationals who later proved not to have known what was going on, even though they received several million dollars in payment for misinformation. We need to reallocate how we're spending the money and put it to better use. The Kerry military plan calls for strengthening the pay of soldiers so you have a better trained - and better motivated - force, one that relies more on diplomacy and benefits enormously from money that would otherwise go to unworthy projects. Regarding the missile shield, this is not an activity the United States should be involved in because it doesn't work. The money should be put towards soldiers on the ground, or education and developing other strategies that don't rely on unproven weapons systems.

Tom Nicholson and Julie Garrison Frederick contributed to the report.