"BEHIND every great man there's a great woman," the saying goes. Though meant as an affirmation of female worth, it's actually rather patronising: "I just couldn't have done it without you, honey. 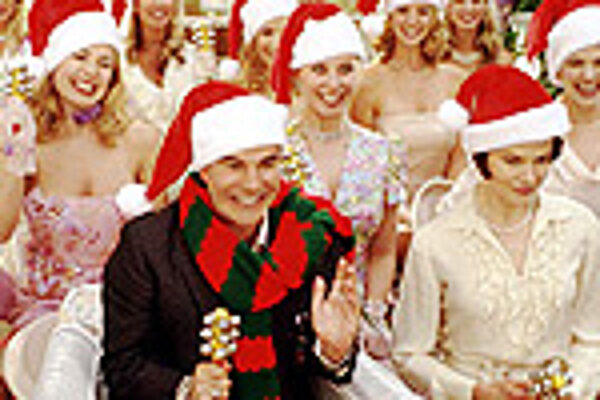 "BEHIND every great man there's a great woman," the saying goes. Though meant as an affirmation of female worth, it's actually rather patronising: "I just couldn't have done it without you, honey. Who else would have cooked, cleaned, ironed my shirts, and kept me satisfied?" It is, after all, behind every great man.

And for years Nicole Kidman was right there. She dutifully stood by as her husband, Tom Cruise, received accolade after accolade, even as she was quietly proving herself far more praiseworthy. Ever the proud, smiling wife, Kidman was the woman behind the man.

When the statuesque Australian actually did stand behind her husband, they seemed oddly mismatched: She towered over him. Yet somehow their marriage seemed to work... until the messy divorce, that is. Suddenly, Kidman became a superstar, with high-profile roles, critical praise, and Oscar nominations (she won one). The public bought tickets and studio chiefs salivated. Nicole Kidman stood behind no one.

So it makes perfect sense that Kidman, with her dramatic ascension, would be chosen for the lead in Frank Oz's remake of the 1975 feminist cult classic The Stepford Wives. In Oz's movie, which takes place in a decidedly post feminist, post-Tom-and-Nicole world, it is the women who are great. But where the men stand is unclear.

Kidman plays Joanna Eberhart, a confident and brilliant television executive who, due to her enthusiasm for brutality and exploitation, stands atop the reality television game. Her popularity and wealth continues to grow unabated until a violent incident involving one of her shows leaves her jobless. Shattered, she moves with her subservient husband, Walter Kresby (Matthew Broderick), and their two children from New York to the picturesque, gated town of Stepford, Connecticut.

Joanna, whose summer wardrobe seems to consist solely of lighter shades of black, immediately feels out of place. The women are uniformly blond, heavily made-up, and clad in gaudy floral dresses. Each seems interested in little apart from catering to her husband's every whim - be it gastronomical or sexual. For fun, the wives go to the spa, where they practice exercise routines based on household chores.

Walter, on the other hand, immediately takes to Stepford. He quickly joins the men's organisation, where they sit around, drink scotch, smoke cigars, and discuss how great their wives are. Just as Walter grows anxious about his wife's relative inadequacy, Joanna begins to suspect that something sinister is going on behind the walls of the men's club: perhaps these men did something to their wives to transform them into mindless drones.

Soon, Joanna's and Walter's marriage goes from troubled to worse. In this respect, the casting seems inspired - on the surface at least. Broderick and Kidman have virtually no rapport together, which is only emphasised by their differences in height (Broderick is probably as tall as, well, Tom Cruise). The trouble is that it's hard to understand how these two people ever loved each other to begin with. And though their marriage is crumbling (believably) for much of the movie, they also strive to make it work. When they do so, their supposed earnestness seems artificial.

Artificiality is, of course, one of the major themes of the story: The fake domestic bliss that these men force upon their wives is, in fact, bad. Perhaps it's a testament to the cultural reach of feminism that what was once a 1970s horror film can be remade as a comedy 30 years later. But Oz's film, by not exactly championing the possibility of a strong woman with no one standing behind her, seems to suggest that any progress made in the interim is artificial. Unfortunately, so is the comedy.