EVERY autumn, a diverse crowd of climbing enthusiasts and film buffs converge on Poprad. Young, old, professionals, students - they are all lured there for the same reason - to watch the ancient themes of "man versus nature" and "nature versus man" played out at the International Mountain Films Festival (MFHF).
The festival, which travels around the world, takes place in Poprad, Slovakia, between October 13 and 17. In its 12th year, the festival will showcase the best films from mainly Austria, the US, Great Britain, Italy, and Germany - with five films from Slovakia. 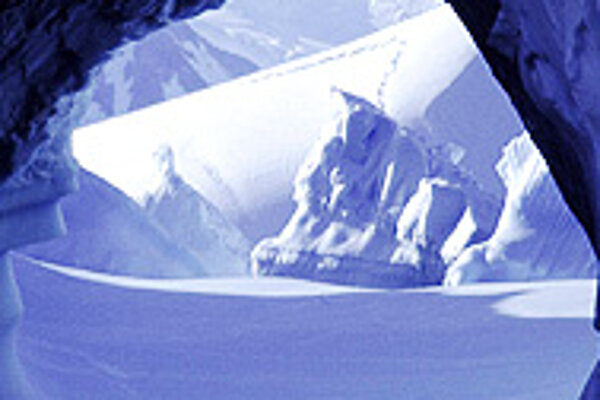 Font size:A-|A+0
EVERY autumn, a diverse crowd of climbing enthusiasts and film buffs converge on Poprad. Young, old, professionals, students - they are all lured there for the same reason - to watch the ancient themes of "man versus nature" and "nature versus man" played out at the International Mountain Films Festival (MFHF).

The festival, which travels around the world, takes place in Poprad, Slovakia, between October 13 and 17. In its 12th year, the festival will showcase the best films from mainly Austria, the US, Great Britain, Italy, and Germany - with five films from Slovakia. Internationally acclaimed climbers, including Swiss mountaineer Erhard Loretan, will participate as guest speakers.

The festival has a long history in Slovakia. Poprad has welcomed many who are among the Who's Who of climbing, from Sir Edmund Hillary, the first man to climb Everest, to Leo Holding, the British "bad-boy" of rock climbing. This year, it welcomes participants of the Annapurna South Face International Expedition 2004, members of the Karakoram 2004 expedition in Pakistan and Loretan, who has conquered dozens of the world's highest peaks.

Involved in the organisation of the festival since its 1993 debut in Poprad is 38-year-old Marika Hámorová.

Festival director, wife and mother of two, Hámorová is a high-altitude mountaineer in her own right. Last year she climbed Aconcagua. At nearly 7,000 metres, it is the highest peak in South America.

"The theme of 'man versus nature' and 'nature versus man' is something most of us can relate to. The ideas, opinions, and feelings inspired by nature unite us all," she says.

One of the reasons the festival is so successful is because it continues to attract submissions from the most talented outdoor filmmakers alive. Only the highest calibre film is selected. This year, 92 films were submitted for consideration for the festival's Grand Prix, but just 34 will compete.

According to Hámorová, the competing films have not been selected according to theme. She says that while there are filmmakers who devote themselves only to certain themes, or there are periods when a particular theme is popular, the festival organisers always try to build a programme that represents a wide range of interests.

"Last year, the films were all about flying and all kinds of courageous stunts. This year it is more about high-altitude mountaineering," she says.

Those who visit Poprad during the week of October 13 can watch an emotional film about a man who walks across Australia with his dog. They can catch filmed attempts on Makalu and K2, and see how one goes about surfing the Amazon River. A documentary movie exploring the Mont Blanc glacier reveals 800 metres of tunnels, and shows divers plumbing its icy subterranean waters. Attendees can also catch the Slovak films, two of which are by award-winning Slovak director, Pavol Barabáš.

The highlight of the festival takes place on Friday and Saturday, October 15 and 16, when the competing films will be followed by discussions with the guest speakers.

Apart from the competing titles that focus on mountain sports, the festival shows films sorted according to themes, such as retrospectives, history, profiles, premieres and audiovisual programmes.

Within this division, the festival organisers will pay tribute to mountaineer Jozef Psotka, who died while descending Everest 20 years ago. This year, Psotka would have turned 70. They will also remember Patrick Berhault, one of the most visionary and accomplished climbers in recent decades who died this year in a fall from Dom, the highest peak in Switzerland.

Despite the tragedies that accompany mountain sports, those who form a passion for them never seem to give up. The same can be said for the festival's organisers.

"If I ever decided to leave the festival, I would certainly find somebody to fill my place. The festival is too important to die, and no one would allow it to simply go," the festival's director says.

Hámorová's husband is helping out with the festival's planning as well. An active mountaineer, he has ticked the Seven Summits and is now working on climbing all 14 8,000-metre peaks. Theirs is a shared partnership - at home, at work and, one assumes, in the mountains.

"I can say that we are quite well-matched colleagues, not only in work but also in marriage. When one is off climbing a mountain, the other stays home and substitutes for us both," Hámorová says, laughing heartily.

The International Mountain Film Festival takes October 13 to 17 in Poprad. The films will be screened at Gerlach and Tatran cinemas in Poprad, and Iskra Cinema in the nearby town of Kežmarok. The original language of most of the films is English, and majority of the others are equipped with English subtitles. For more information visit www.mfhf.sk (also in English).