The art of existence 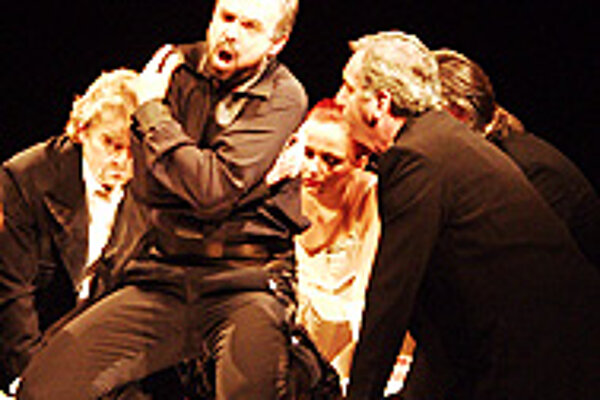 PERHAPS artists exist to create art that debates the reason we exist. This w as certainly the case after World War II, when Samuel Beckett's absurdist drama, Waiting for Godot, declared the human condition endlessly cyclical and essentially meaningless. But was it on Shakespeare's mind when he began Hamlet's famous soliloquy with the words: "To be, or not to be, that is the question"?

In The Players, which had its Slovak premiere at the National Theatre on October 1, director Martin Huba answers Hamlet's fundamental question - why do we exist? - with an absurdist response: for no reason at all.

Composed by Juraj Beneš, who studied under the co-founder of modern Slovak music, Ján Cikker, The Players uses dissonance and multi-layered vocal structures to represent the uncertainty of our existence. The orchestra's woodwinds swirl and squeak, the harp ripples glissandi, and the percussion section grinds; all carefully held together with the precision of a metronome. Then the tight-knit structure swells as the singers project strident vocal lines, along with some sounds straight out of Dadaism - a style that sought to revive the spontaneous nature of music through unorthodox, incomprehensible vocal emissions and musical structures.

But Huba's decisive, crisp staging led the singers through this wilderness of modern harmonies. They were anchored, confident of the symbolism they were communicating, versatile masters of the wide, dark stage they occupied, designed by Jozef Ciller. It was clear Huba had worked meticulously to infuse emotion into the singers' every action.

Ján Ďurčo (Hamlet) was particularly convincing. His voice had a wide range and a richness that turned even dissonances into something pleasing to the ear, even though there were moments the orchestra overpowered him. His acting was equally compelling. In one scene from Act I, in which Hamlet discovers that his uncle killed his father, Ďurčo repeated the word "uncle" a dozen times before stumbling in a daze and climbing onto a table to repeat it. Each repetition had a unique rhythm and diction that evolved through a whole spectrum of emotions.

Dagmar Bezačinská (Ophelia), draped in a flowing white dress, floated like a spirit, her touch gentle and light. Her superior breath control allowed for impressively long phrases, but her thin voice often went shrill. Gabriela Hübnerová's (Gertrude) regal aura complemented Hamlet's expressive style, and their Act II duet was like a self-contained drama. Jozef Kundlák (Tenor 1) had a light, lyric sound that glided between registers, never showing signs of the overly metallic quality that befalls many tenors. Juraj Peter (Bas 1) more often shouted his solo lines than sang them, but provided a strong choral foundation in the ensemble vocal sections.

Conductor Pavol Tužinský balanced this surreal, intellectually stimulating environment and added another dimension to it. He allowed plenty of time for artistry to flourish during the thunderous, rapid drum solo in Act I, yet he never hesitated to push the ensemble forward.

The Players uses its transformed harmonies and musical structures to remind us that, even if our existence may sometimes appear endlessly cyclical, we exist for a reason: To express.