ECONOMY Minister Pavol Rusko wants to change the country's nuclear plans. He proposes that that two blocks of a nuclear power plant in Jaslovské Bohunice should be shut down simultaneously in 2008, instead of decommissioning one reactor in 2006 and the other in 2008.
Rusko claims that shutting the blocks down at the same time is a safer option than decommissioning them in subsequent years. The V1 reactors are located 65 kilometres northeast of Bratislava. 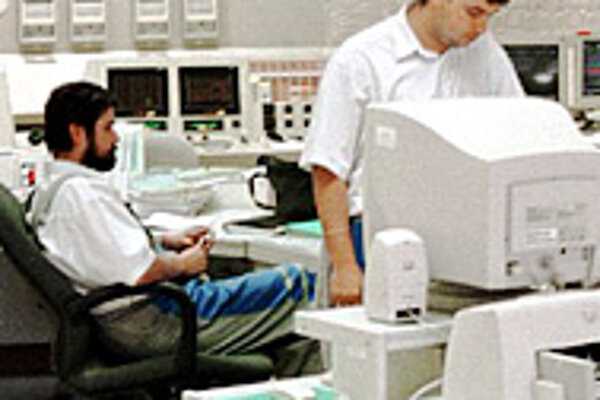 Font size:A-|A+  Comments disabled
ECONOMY Minister Pavol Rusko wants to change the country's nuclear plans. He proposes that that two blocks of a nuclear power plant in Jaslovské Bohunice should be shut down simultaneously in 2008, instead of decommissioning one reactor in 2006 and the other in 2008.

Rusko claims that shutting the blocks down at the same time is a safer option than decommissioning them in subsequent years. The V1 reactors are located 65 kilometres northeast of Bratislava.

"Two-stage decommissioning might increase the risks by as much as 100 percent," Rusko told the press on October 11.

The economy minister says that expert opinion support him.

He cited a detailed study by Relko, a firm widely recognised for evaluating the safety of nuclear power plants. The study outlines the potential risks of two-stage decommissioning.

As part of its accession agreements, Slovakia has promised the European Union to close down one of the two blocks of the Jaslovské Bohunice V1 plant in 2006, and the second V1 block in 2008. The V2 plant will continue operating, while the A1 block broke in 1977 and has not functioned since.

Foreign Minister Eduard Kukan said that reaching consensus with the European Union about simultaneous decommissioning in 2008 would be a complicated and laborious process.

"It cannot be ruled out in advance, but it is a very sensitive issue, especially for some surrounding countries," said Kukan, according to the news wire SITA.

Commissioner Ján Figeľ of the European Commission said that persuading 24 EU nations to delay decommissioning of V1 by two years seems to him to be a complicated task.

"I cannot see the smallest reason why EU countries would oppose [the simultaneous decommissioning]. If the EU was serious about the V1 decommissioning, and if it requested this step from the Slovak Republic for safety reasons, then it should have no problem with what I am proposing," Rusko said October 11.

Austria's statement was a direct reaction to Rusko, who said that Slovenské elektrárne, Slovakia's state-run power producer, should be sold to an investor intent on completing two blocks of a nuclear power plant in Mochovce.

The European Commission indicated that any changes to Slovakia's decommissioning plans would jeopardise the EU financial compensation package set aside for the task, since upholding the agreement on the Jaslovské Bohunice V1 plant is one of the conditions for receiving compensation.

Under the agreement, Slovakia is guaranteed a sum of Sk16.7 billion (€410 million) in compensation, which it can draw from until the end of 2013.

The ruling coalition parties will discuss Rusko's proposal this month.

The head of Slovakia's Nuclear Supervision Authority, Marta Žiaková, told the daily SME October 12 that the nuclear power plant was constructed as a two-block plant, and although joint decommissioning would be more advantageous, her company has already made preparations for the two-phase decommissioning.

However, Žiaková believes that it is necessary to take measures that reduce potential safety risks.

The financial daily, Hospodárske noviny, quoted Žiaková as saying, "The [safety risks] to the nation can be proved. We have seen the [Relko] study and the risks [associated with a two-stage decommissioning effort] really do increase."

A member of the board of directors of Slovenské elektrárne, Ignác Pňaček, told the news wire SITA that shutting down one block while maintaining operations at the other block is not a threat to security. He agrees, however, that it could present an increased risk.

Pňaček said the increased risks are associated with refuelling the second reactor while the first one is shut down. Although there is always a risk with refuelling, the risk would double during the two-year period, from 2006 to 2008, when only one block would be operational. Pňaček based his statements on the Relko study.

In late September, Minister Rusko set up a team to draft several options for the V1 decommissioning. After picking the best alternative, the minister will submit it to the cabinet, which will have the final say on the V1 shutdown process.

Rusko wants the cabinet to come to an agreement by the end of October, and charge the prime minister with initiating talks with his EU counterparts.

Opposition party Smer has been opposed to the decommissioning of the V1 nuclear power plant since the beginning.

"Smer has always considered the cabinet's obligation to turn off the V1 plant in Jaslovské Bohunice as unjustified in terms of safety, and as harmful to Slovakia's economy and the country's energy sufficiency," the party said in a statement for the press.

Greenpeace, the international environmental organisation, claims that the V1 plant should have been closed down in 1999. Stretching the reactor's lifespan to 2006 is, according to the group, already an enormous compromise.

Greenpeace spokesman, Juraj Rizman, told The Slovak Spectator that he is sceptical of Rusko's motives.

"We do not think it is a professional problem, but rather a political trick to keep the first block of V1 alive until 2008," he said.

Rizman encouraged Slovakia to uphold its obligations to the European Union and its neighbours.

"The Slovak government should not yield to lobby pressures and hysteria evoked by some politicians," Rizman told The Spectator.

Mikuláš Huba of the Society for Sustainable Development agrees with Rizman. He told The Slovak Spectator that Rusko's ploy represents an abuse of power for political gain.

"If Rusko is convinced that the blocks need to be shut down simultaneously, and if he cares so much about the safety of the process, why not propose switching both blocks off in 2006?" Huba said.