EXPERIENCED business people do not have a monopoly on good business ideas. It turns out that students, too, can create vital plans, if they are given the proper opportunity and motivation. And none, according to the Slovak American Enterprise Fund (SAEF), are better equipped than Slovak students. 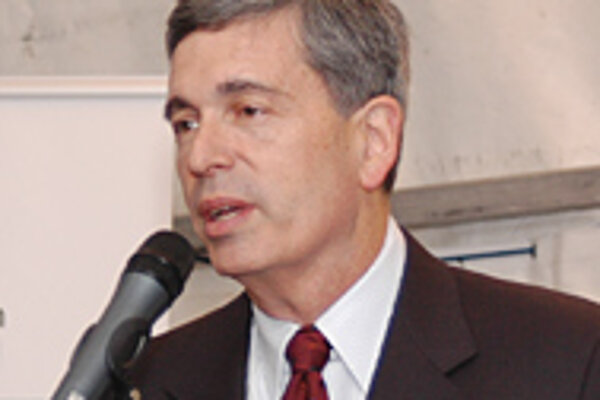 Font size:A-|A+  Comments disabled
EXPERIENCED business people do not have a monopoly on good business ideas. It turns out that students, too, can create vital plans, if they are given the proper opportunity and motivation. And none, according to the Slovak American Enterprise Fund (SAEF), are better equipped than Slovak students.

On October 11, the SAEF announced the winners of its 5th annual "Start Business" competition, justifying its position that Slovak university students not only know and understand the modern market economy better than most, but they are also free from the burdens of the past.

The SAEF is a private institution that provides start-up capital and loans to small to middle-sized businesses in Slovakia. The organisation launched the first "Start Business" competition five years ago based on the premise that today's university students are the future of the Slovak economy.

"Young people are looking at their future business careers. They are really what the future of this country is all about. It is the young people today who will be the future entrepreneurs and business people of tomorrow. They have not been biased by the totalitarian and controlled economy," said Ronald Weiser, the US ambassador to Slovakia.

Every year, the competition focusses on the business plan.

"A good business plan is a fundamental requirement for a good business. I was in business for 34 years before I came to Slovakia. I can tell you from experience that businesses with weak plans rarely amount to more than big mistakes," Ambassador Weiser said.

To participate in the "Start Business" competition, university students were asked to submit a detailed business plan to the SAEF. Each business plan had to relate to either a new business development or an improvement to an existing enterprise that operated primarily in Slovakia. And each plan required an investment of up to Sk40 million (€1 million).

The SAEF said its jury evaluated and rewarded business plans that showed an effective use of capital, demonstrated sound financial strategy, and yielded an optimal potential return on investment. The jury also looked at the creativity involved, the project's feasibility, and whether the selected strategy was justified.

The SAEF jury narrowed the field down to 25 teams before selecting the top six teams. These six earned a chance to present their projects orally before the jury. Of the six who presented, the jury selected one winner each for the categories of Best Project, Most Original Project, and Most Realistic Project.

The winners were financially rewarded. The Best Project was awarded Sk300,000 (€7,499); and the Most Original and Most Realistic Projects received Sk100,000 (€2,500) each. According to the SAEF, winners can use their rewards as start-up capital towards their proposed projects, but they are not obligated to do so.

"Taste and Health in Tradition" by Peter Karácsony and Lucia Dobrucká, both students from Comenius University's department of management, earned the distinction of Best Project.

Karácsony and Dobrucká's business plan focuses on growing regional fruit trees in the village of Haluzice in Biele Karpaty, and using the fruit to produce original products according to traditional, ecological methods.

"The products produced should be unique to the region," Dobrucká told The Slovak Spectator. "We based our plan to a considerable extent on directives and laws put forth by the European Union."

Karácsony said: "The second idea of the project, which is less obvious but nevertheless important, is the aspect of regional development. Our business will not only be successful but help the economic development of Haluzice as well."

Karácsony and Dobrucká would like to realise their business plan, but they worry that it would require even more work, and, of course, start-up investments.

"We would need the land, buildings, investments. We would need someone with the right economic credentials to manage the whole project as well," they agreed.

"HollowTex" by Matúš Gašparík, Ľubomíra Kovaľová, and Milan Klačko from Slovak Technical University's department of chemical and food technologies took the Most Original prize. The business plan, on kidney dialysis technologies, is for the development of a new company for manufacturing and shipping artificial kidneys to medical centres.

"We were surprised that we got so far in the competition, because it is complicated. But I think it deserves the title of Most Original Project," said Gašparík.

The Most Realistic award went to "Revitalisation of the Tourist Centre in Javorina in Malá Fatra" by Michal Pyšný and Martin Štrba from Comenius University's department of management.

He added: "I think it is a very realistic idea. There are many such centres in Austria and Switzerland. In Slovakia, there is almost no competition in this sector. It would be doable with a certain amount of start-up capital".

Martina Rošková, the president of SAEF concluded: "When successful people are asked about their success they usually answer that it all came from hard work and realistic aims. The aim of our competition was to evaluate the best business plan. Now, the plans are finished and the participants' work is done. However, in the real business world, the hard work is just beginning."

And the winners are...