No tears after divorce

SLOVAKIA and the Czech Republic still enjoy exceptional economic ties, and the statistics on foreign trade between the two nations talks volumes about the intensity of the connection. In an exclusive interview the newly appointed Ambassador of the Czech Republic to Slovakia Vladimír Galuška, said that there are no bad feelings after "the divorce". 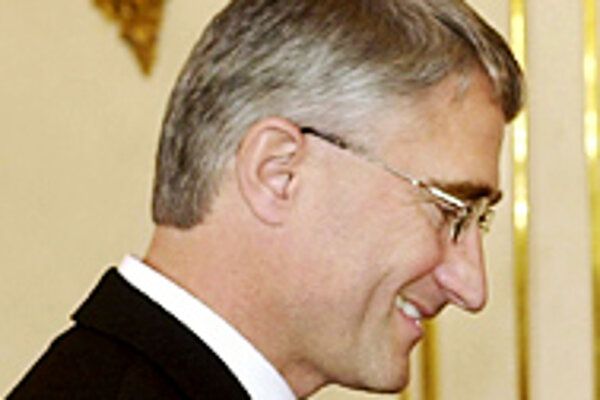 Font size:A-|A+  Comments disabled
SLOVAKIA and the Czech Republic still enjoy exceptional economic ties, and the statistics on foreign trade between the two nations talks volumes about the intensity of the connection. In an exclusive interview the newly appointed Ambassador of the Czech Republic to Slovakia Vladimír Galuška, said that there are no bad feelings after "the divorce".

The Slovak Spectator (TSS): Do you think Slovaks and Czechs have grown distant from each other since Czechoslovakia split into two countries? How has the relationship between the two nations changed over the past few years?

Vladimír Galuška (VG): It cannot be denied that our nations do not see to each other's kitchens as closely as we did in the shared "household" that was Czechoslovakia. However, this drifting apart is not only the consequence of the separation. Both republics are opening up and seeking new horizons. Our people have started travelling to countries where access had been previously denied. We can visit distant corners of the world, where fresh perspectives enrich us and influence our relationships with our closest neighbours.

I believe both countries have grown up in this relationship; we have managed to get rid of our provincial bias. In recent years, as our pace in embracing the international community has harmonised, we are closer in our thinking than ever. We are just as close over the everyday problems as over the distant future.

TSS: Has EU entry had any considerable impact on the Czech and Slovak relationship?

VG: If the joint entry to the European Union has one considerable impact on both countries, it is that EU membership definitely brings us closer together. The significant accord of our legislative and economic environments makes us natural partners, even in respect to the "new world" of EU law.

The people and governments of both nations share similar interests and goals, and this is played out when we offer each other mutual support.

TSS: Can you describe any recent changes in attitude from Slovaks towards Czechs?

VG: This is more a question for a native Slovak than for someone who arrived in Bratislava only a week ago. However, I can say that I have experienced only frankness and friendship wherever I have gone. I think I answered this query in my response to your first question.

TSS: What are the problems facing the relationship at this point?

VG: The term "problems" is far too strong a word to describe any of the tasks that Czechs and Slovaks are working on right now. None of these issues has a negative impact on the ties between our countries.

Even issues that attract media attention, like the border agreement or migration, are being discussed factually, without any emotional outbursts and with an obvious effort to reach agreement. This is exactly the atmosphere I will strive to preserve as ambassador, and that might help us attain shared goals within the EU.

TSS: Do you believe that business opportunities between the countries have been fully explored? What spheres of Slovak business would be attractive to Czech business communities?

VG: We still enjoy extraordinary economic ties, and the frequency of foreign trade between the two nations talks volumes about this connection. The era of transformational privatisation is over in both countries, and thus the degree of attraction to further economic opportunities will depend on free trade developments and rules on both sides.

What today is a focus on the automotive industry will be replaced by high-tech production, research and development tomorrow. Also, services, tourism and the development of small and medium-sized businesses, are ripe sources of business opportunities for Czechs in Slovakia.

TSS: What obstacles stand in the way of Czech investment in Slovakia? What impact does Slovakia's rejection of ČEZ in the Slovenské elektrárne bid have on the Czech business appetite?

VG: There are no institutional and legal obstacles [standing in the way of Czech investment]. The market creates unexpected opportunities, but also sudden risks. Successful businesses are tested by how well they are able to adjust and handle market changes. ČEZ [the major power producer in the Czech Republic] is an ample European player on the energy market. Perhaps the loss of one attractive investment [the purchase of Slovakia's major power utility Slovenské elektrárne] will be redeemed by eventual expansion somewhere else. The appetite to invest depends on the emerging opportunities in the Slovak economy that interesting reform measures undoubtedly promise.

TSS: You have said recently that you do not see a problem with Roma migration to the Czech Republic, and that an exodus of Slovak Roma has not materialised. Do you think this problem could re-emerge in the future?

VG: The current numbers of Roma asylum seekers are truly negligible. However, we do hope that our governments continue working intensively to erase the core of the problem by solving the deprivation of the Roma community in Eastern Slovakia. The Slovak government and regional bodies are aware of the problem, and they are taking steps in the right direction. But only after years of systematic work and education, along with considerable financial assistance, can we expect real improvement.

I truly hope that some kind of European solidarity will also play a major role in solving this problem, and that the reason motivating a person to emigrate is free will, not despair.

TSS: Please describe the most recent developments between Slovakia and the Czech Republic over border regulations.

VG: The agreement on border regulations was approved by the governments of both countries in January, 2004. Now we are waiting for ratification. In the Czech parliament, doubts rose about the necessity of certain measures, which resulted in us introducing some limitations on cross-border travel. The Czech government is considering further proceedings, as it wants to hear concerns and fears of its citizens, deputies and senators. Of course, obligations of both countries towards the EU need to be observed, along with future participation in the Schengen Treaty [free movement of people within the EU]. There is mutual effort and resolve to reach an agreement, so I assume that by the end of the year, the issue will be solved.