Getting to know you

GERMANY's attention on Slovakia has increased since Slovakia's EU accession, not least because of its bold tax reform. German Ambassador to Slovakia, Uta Mayer-Schalburg, wants Slovakia to be even more visible in her homeland, and believes that a new, more systematic approach to promoting Slovakia's image abroad is the key.

The Slovak Spectator (TSS): Location, which makes Slovakia a natural extension of Germany's markets, remains one of the greatest advantages that German investors enjoy. What are the other advantages that make a small country like Slovakia attractive? 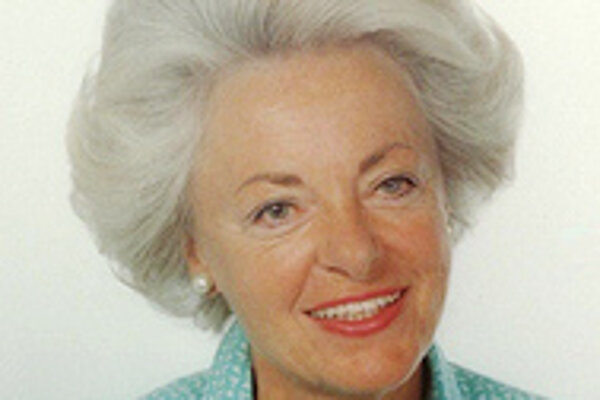 Font size:A-|A+  Comments disabled
GERMANY's attention on Slovakia has increased since Slovakia's EU accession, not least because of its bold tax reform. German Ambassador to Slovakia, Uta Mayer-Schalburg, wants Slovakia to be even more visible in her homeland, and believes that a new, more systematic approach to promoting Slovakia's image abroad is the key.

The Slovak Spectator (TSS): Location, which makes Slovakia a natural extension of Germany's markets, remains one of the greatest advantages that German investors enjoy. What are the other advantages that make a small country like Slovakia attractive?

Uta Mayer-Schalburg (UMS):Investment decisions are always complex ones, and investors decide individually. However, besides location, most investors would cite the favourable salary scheme, the educated work force and the revolutionary 19-percent flat tax rate as main advantages. For Germans, the widely-spoken German language may also speak in favour of Slovakia.

TSS: Though sharing central Europe for several centuries, the nations speak different languages. Has the language barrier between Germans and Slovaks diminished over the past decade?

UMS: Due to many important historical, geographical and economic reasons the German language has enjoyed a traditionally strong position in Slovakia. Over the past decade, the interest in, and usage of, English has certainly increased, which has its logic, particularly in view of the ongoing globalisation process.

But the fact remains: German is the most widely spoken language in Europe and I trust that it will keep its strong position in Slovakia. Of course, we try to contribute to that end. Together with our Austrian and German-speaking Swiss friends, we promote our language and culture in Slovakia. We support the Slovak education sector by providing high-quality German language tuition, particularly at schools and universities. I regularly meet young Slovaks who speak and understand German at a very high, professional level. Many of them have worked or studied in German-speaking countries and know us well. I am convinced that the ability to speak foreign languages and to understand each other is one of the features that makes Europe so European: Unity in diversity.

TSS: Do you feel that the Slovaks and Germans know enough about each other?

UMS: Very briefly, we never know enough about each other. But seriously, on a general scale I am inclined to say that Slovaks know more about Germans than vice versa. The German language media is quite widespread in Slovakia; I have the impression that people in general know what's going on in Germany. This has to do with what I said earlier: Whoever knows the language knows the people.

I really wish that Slovakia would be more visible in Germany. For sure, attention has increased since Slovakia's accession into the European Union and, not least, since Slovakia's bold tax reform. But I believe - and I have made this point very often to my Slovak partners since I've been here - Slovakia should find a new, more systematic approach to promote its image abroad.

TSS: Are you satisfied with the German business presence in Slovakia? Has the potential been fully explored?

UMS: As Slovakia's biggest investor, Germany could principally be satisfied with its business presence up to now.

There are more chances waiting and opportunities to be explored, for example, in the energy sector or in chemical industry. And there could be more small and medium-size enterprises investing on the Slovak market. A successful economy keeps moving.

TSS: What are the main areas of interest for German investors in Slovakia? What further changes could the Slovak government make to encourage investment by the German government?

UMS: As Slovakia is on her way to becoming one of the major automobile producers per capita, it is moving into the focus of automotive suppliers and subcontractors. Regarding the privatisation process of so-called strategic investments, there are the current state-owned shares in which investors are interested. And here again, energy is a good example. All in all: the framework conditions for investment must be right and the government has a decisive role in setting such conditions.

TSS: Slovakia's courageous tax reform brought a lot of praise to the government of Mikuláš Dzurinda, but it also evoked concerns on the part of some old EU nations including Germany. Do you think that Slovakia's low taxes might in any way affect business or political links between the two nations?

UMS: The bold tax reform enjoys quasi-revolutionary status and has the admiration of experts and business. Slovakia's low taxes do not affect any relations among partners or EU member states.

However, Germany is aiming at the coordination of corporate taxes within the EU, i.e. a common tax base to facilitate cross-border investments in the framework of a single market, and to reduce the compliance costs of the enterprises.

If minimum standards could be introduced, competition and greater transparency could be achieved.

TSS: Do you feel that Slovakia has been fully exploiting its tourism potential?

UMS: If you ask Slovak partners, of course not. For sure, Slovakia has its potential, but there are also obstacles, which, in my view, have to do with very basic questions of infrastructure and marketing. Key issues are, for example, road accessibility to places of interest, quality of hotels and availability of reliable and friendly services.

TSS: Fears of a vast wave of immigrants from Eastern Europe seeking labour in the old EU member countries have not materialised. Are there still concerns on the part of Germany from the influx of eastern labour?

UMS: I think that the mere expression "influx of Eastern labour" does not do justice to the quite complex situation on the German labour market. Indeed, the situation is difficult, unemployment is high. But there are shortages in certain professions. Anyway, we agreed with the Slovak government during the EU accession negotiations on a transitional period for the introduction of free movement of labour.

This transitional period consists of three segments (2+3+2 years), and member states will decide whether national limitations have to be maintained or not for a further time period.

There will be no such option after the transitional period has come to an end in seven years. It is quite early to predict what the situation will look like in a couple of years, but I imagine that any decision will have to be very carefully assessed. Besides, I think that there are already many, many Slovaks who successfully found legal employment in Germany in jobs and professions that are, again, already open to them.