Carpathian Germans known by their skills

WHO comes to mind when you think about national minorities in Slovakia? The Hungarians? Ukranians? Ruthenians? Perhaps, but what about the 5,500 Germans who also belong to the national family?
In the time of the Hungarian monarchy the German minority was the engine that powered economic progress in Slovakia. After World War II, many ethnic Germans escaped or were expelled from Slovakia, which threatened the very existence of a German community here. 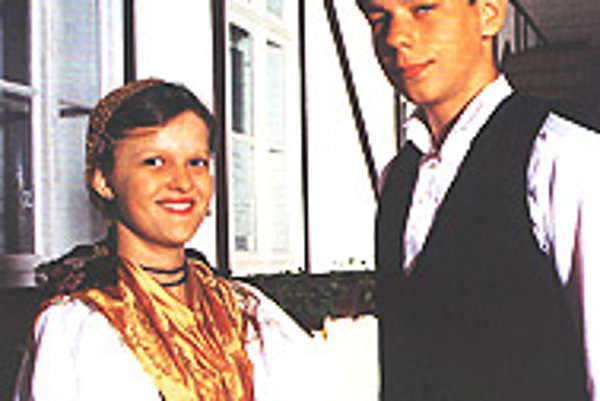 Font size:A-|A+  Comments disabled
WHO comes to mind when you think about national minorities in Slovakia? The Hungarians? Ukranians? Ruthenians? Perhaps, but what about the 5,500 Germans who also belong to the national family?

In the time of the Hungarian monarchy the German minority was the engine that powered economic progress in Slovakia. After World War II, many ethnic Germans escaped or were expelled from Slovakia, which threatened the very existence of a German community here.

"Carpathian Germans, as they are often called, have been living together with Slovaks and other nationalities on today's Slovak territory for almost 900 years. After 1945, just like millions of Germans from Eastern and Central Europe, they had to face the consequences of the war and of the power politics of Stalin and Beneš [former Czechoslovak president]. Many of them lost their lives and houses," Ondrej Pöss, the chairman of the Carpathian German Association and director of the Carpathian German Culture Museum, told The Slovak Spectator.

According to Pöss, 90 percent of the Carpathian Germans found new homes in Germany, Austria and overseas. The situation of the Germans who, for various reasons, stayed in Slovakia, was more difficult.

"Intentional assimilation, a non-existent school system for Germans, and no opportunity to develop their culture, almost led to their disappearance in the late 1980s. Yet the year of the Velvet Revolution, 1989, brought new hope. In the 1991 census, 5,629 citizens declared themselves to be of German origin. In the last census, in 2001, there were 5,406. However, the real number is estimated to be twice as high," he added.

Pöss pointed out that relations between Slovaks and Carpathian Germans are not as damaged as the relations of the Sudeten Germans and Czechs, for example. Proof can be found in the fact that Carpathian German associations are recognised and welcomed by foreign, as well as Slovak, officials.

"It is true that in Slovakia, as well as in the Czech Republic, post-war decrees that deprived Carpathian Germans of property and social status are still valid. But for a majority of them today, it is more of a moral issue. We can imagine that the problem could be solved, for example, by creating a fund for compensating injustices done to Carpathian Germans in Slovakia," said Pöss.

The World War II decrees, issued by then-Czechoslovak President Eduard Beneš in 1945, adopted the principle of collective guilt and resulted in barring thousands of Germans and Hungarians from land and citizenship, and deporting them abroad.

The Germans had been coming to the territory that is now Slovakia since the period of the first Hungarian king Stephen (1000-1038) in the 11th century. These "guests" had the privilege of living here according to their traditional "German" laws.

Following the Tartar raids in 1241 the Hungarian kings invited Germans in large numbers to settle down in their empire and to bring life to empty areas of land. The main German wave ended in the late 14th century. During the Middle Ages the real number of Germans living in Slovakia was approximately 200,000 - about one-fifth of the total population.

Later, wars and assimilation brought a significant decrease to this number. In 1945, before the decrees were adopted, there were 150,000 Germans living in Slovakia, about 5 percent of the total population.

The first Germans coming to the Hungarian monarchy were miners, craftsmen and merchants, but also knights and clergy. It is well known that German miners could process ores of precious metals. Central Slovak mining towns such as Kremnica, Banská Štiavnica, and Banská Bystrica were the centres of the economic and monetary system in the Hungarian monarchy of the 14th-16th century.

Thanks to the cooperation of two merchant families - the Fugger family from Augsburg and the Thurzo family from the eastern Slovak region of Spiš - ore mining in the Hungarian monarchy reached its peak in the 16th century. The first Mining Academy in the world was founded in Banská Štiavnica in 1762.

Germans were also founders of the first guilds, in the 14th century. Initially, only Germans were members. As a result, a greater part of Slovak craft terminology has its origin in the German language.

Thanks to Germans lots of world-famous historical treasures were built in Slovakia, such as St. James' Church in Levoča, with its 18.62 metre gothic altar, the highest in the world, and the historical and technological mining sights of Banská Štiavnica. German law predominated in most Slovak towns.

Many famous scientists, technicians and artists were Carpathian Germans as well.

"Famous artists, too, are to be found, such as compositor Ján Nepomuk Hummel; Sigismund Kusser, the founder of the Opera in Hamburg; Goethe's teacher Adam Friedrich Oeser; and sculptors Viktor Tilgner, Jozef Damko and Alojz Rigel," says Pöss.

The Carpathian Germans were living mainly in three areas in Slovakia. The first one was located in and around Bratislava, on the border with Austria and Hungary. Bratislava itself had a majority German population until 1900.

German settlers in central Slovakia, known as Hauerland were attracted by the quantity of precious metals there. During the 13th and 14th centuries seven important mining towns were founded in the region, among them "golden" Kremnica, "silver" Banská Štiavnica and "copper" Banská Bystrica. Some of the German villages in the region kept their German character until 1945.

In eastern Slovakia, Germans were living in the Spiš area with its centres in Kežmarok, Gelnica, and Medzev.

"The origin of the Germans can be identified very well by their dialect. In the region of Bratislava, the Bavarian dialect prevails. In Hauerland, the dialect can be described as a mixture of the eastern-central and Bavarian dialect. The situation is similar in the Lower Spiš. Germans living in Upper Spiš have their origin in Silesia and the Sudetes," explains Pöss.

"We are pleased that the history of Carpathian Germans is being gradually revised from an impartial point of view. It is shown, for example, in a new exhibition at the Slovak National Uprising Museum in Banská Bystrica," Pöss says.

The significant contribution made by Carpathian Germans to Slovak culture is also being acknowledged by politicians. Pavol Hrušovský, for example, the speaker of the Slovak parliament, on the occasion of Slovakia's accession to the European Union, asked, "What would Slovakia be without the Carpathian Germans?"