The craft of the Roma

A BELIEF in the future of Slovak smithery brought close to twenty blacksmiths together in Dunajská Lužná October 16 for the first European Roma Blacksmiths workshop.
Known as the "iron village", Dunajská Lužná has for decades exported artistic blacksmiths. "This is not to be taken literally," says Róbert Rigó, whose aim is to protect his ancestors' heritage. 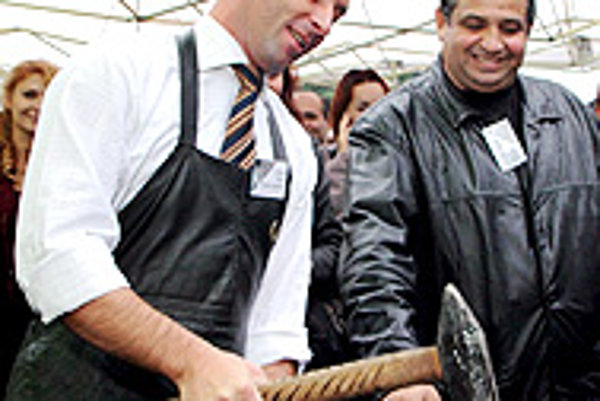 Font size:A-|A+0
A BELIEF in the future of Slovak smithery brought close to twenty blacksmiths together in Dunajská Lužná October 16 for the first European Roma Blacksmiths workshop.

Known as the "iron village", Dunajská Lužná has for decades exported artistic blacksmiths. "This is not to be taken literally," says Róbert Rigó, whose aim is to protect his ancestors' heritage.

"I am speaking about the craft, which today can be found in almost all of Europe, as well as in the USA, Canada and Australia."

Rigó, with the help of some friends, founded the smithy courtyard Hefaiston in Dunajská Lužná in 1999. He also founded Chartikano, an organisation that aims to set up a school, or at least a training course, to teach youngsters the skills of their forefathers.

And this was the main purpose of Saturday's workshop, as well as demonstrating how Roma and non-Roma are able to live side-by-side in Dunajská Lužná.

"The roots of smithery in our village date back to the 14th century. There was a church built in our village at that time. Its front gate depicts the Roma neighbourhood of the village," says Rigó. Why? Becausen the carriers of the tradition in Dunajská Lužná are predominately Roma.

Rigó's relatives would produce parts of ornamental harnesses or metal pieces for wagons - all the necessary things for the farmers, who formed a majority in the village. "My ancestors always had work to do. Lots of people in the area appreciated them. I used to help too, from when I was five," he says.

"In our everyday life, there was no time to discuss the issue of ethnicity. We had to work together in order to survive. That situation hasn't changed," Rigó explains.

Most of the blacksmiths' love for this traditional craft has been inherited. It is not unusual to see a father with his son working side by side in the smithy.

The blacksmiths in Dunajská Lužná are still busy. "I took part in the restoration of buildings such as the Mirbach Palace, the Pálffy Palace, and Devín Castle," says Alexander Reindl, Rigóşs right hand man.

Marián Beták, another blacksmith from Dunajská Lužná, has helped with the restoration of buildings all over Slovakia in past few years. His most famous piece of work is the Presidential Palace gate. He collaborated on this piece with the architect, Ján Kondáč.

Blacksmiths from the Czech Republic and Poland, as well as other regions of Slovakia, also came to the event to encourage their colleagues in Dunajská Lužná.

The village is also extraordiary for the fact that people from 14 different ethnic backgrounds live side by side with each other without any serious conflicts. And out of a population of nearly 3,000, 400 are Roma.

"Although this workshop is called the Roma workshop; it is not only about the Roma, their traditions and products. It was the Roma who organised it, but the participants are non-Roma as well as Roma - Slovaks, Hungarians, Poles and Czechs. However, the fact that it was organised by the Roma shows that they are an integral part of Europe and its cultural heritage," said Anita Botošová, the commissioner and the leader of the event.

She believes that workshops like this can help stop anti-Roma prejudice on various levels and to create opportunities for getting to know each other. The head of the municipal authority in Dunajská Lužná, Eva Takáčová, points to the self-sufficiency of the local Roma.

"The Roma in Dunajská Lužná have their work and they are not dependent on the social welfare system. That is why there is no social tension between the Roma and the non-Roma in our municipality. The Roma here were able to keep their tradition which they can live from and which offers them good prospects for the future," she said.

She also thinks that the symbol of the workshop - a metal globe with a wheel (the symbol of the Roma) in the middle - created by the blacksmiths from Dunajská Lužná, says a lot. The Minister of Labour, Social Affairs and the Family, Ľudovít Kaník had the honour of unveiling it. Kaník is interested in the tradition of smithery in Dunajská Lužná and he is ready to support the young Roma blacksmiths' training.

Kristína Magdolénová is the Editor-In-Chief at the Slovak-based Roma Press Agency.