Farming has its benefits

FARMERS in Slovakia are expecting their first large subsidy from the European Union at the end of 2004. Many analysts think that the money could have been used more effectively if invested in education, or highway construction.
More than Sk30 billion (€750 million) in EU funds will go into the coffers of the Slovak agricultural budget for 2004 to 2006. 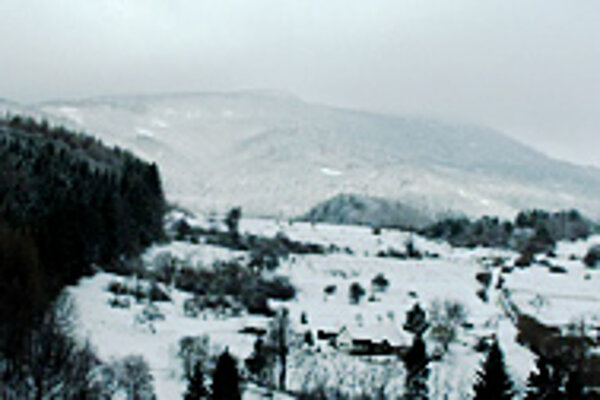 Font size:A-|A+  Comments disabled
FARMERS in Slovakia are expecting their first large subsidy from the European Union at the end of 2004. Many analysts think that the money could have been used more effectively if invested in education, or highway construction.

More than Sk30 billion (€750 million) in EU funds will go into the coffers of the Slovak agricultural budget for 2004 to 2006. The farmers will benefit from four European financial sources: the Sector Operation Programme (SOP), the Countryside Development Plan (CDP), so-called direct income payments, and also from the pre-accession SAPARD fund for long-term projects.

The newly established Agricultural Payment Agency (APA) is responsible for transferring EU funds to their recipients.

The Sector Operation Programme is aimed mainly at the modernisation of the farm sector and to give support to the less developed regions in rural Slovakia, which lack employment opportunities and are experiencing depopulation. Slovakia will receive Sk10.4 billion (€260 million) in the 2004 to 2006 period.

To get funding from the SOP, a farmer has to plan a project and ensure its co-financing. Despite being a relatively complicated source of funding, when compared to other EU sources, Slovak farmers are interested in getting support from the SOP. According to the Slovak Chamber of Agriculture and Food (SPPK), farmers' applications already account for more than 70 percent of the amount available for the whole three years.

"There is one problem with the SOP fund. A farmer will get his money only after realisation of the project. The APA will examine it and will refund the costs that it acknowledges as justified. It means the initial investments are down to the farmer and that could be a problem.

"Some agricultural firms, especially the small ones, often lack capital and are not considered creditworthy by the banks either. But still, farmers interest in this fund is large," Stanislav Nemec, spokesman for the SPPK, told The Slovak Spectator.

The Countryside Development Plan (CDP) is designed to improve the performance of farming companies and help regions with bad weather and geographical conditions maintain and develop agriculture. The CDP fund represents more than Sk21 billion (€520 million) for the 2004 to 2006 period.

To receive funding from this project, farmers do not need to work out a plan. They are entitled to CDP support if they live in a region that fulfills the EU criteria.

"CDP is aimed not only at agriculture, but as its name suggests, it has a broader application. Apart from farmers, municipalities or other citizens could ask for this support," Nemec added.

According to Nemec, the "easiest" money for farmers is definitely the so-called direct payments from the EU and Slovak budgets, as they basically function as subsidies.

"Again, no project is needed. Farmers get the money primarily according to the size of the land they farm on, and only if they are focused on the type of production the EU considers likely to be successful. The new EU members use the simplified system of direct payments. The old EU15 farmers get the money according to commodities they grow, and other criteria," Nemec explained.

It is up to the Slovak government to decide whether it would pay farmers the rest of the subsidies to reach the permitted 60 percent level. According to the 2005 Slovak state budget proposal, next year direct payments for Slovak farmers should reach 54 percent of EU15 level.

Setting the percentage for direct payments recently started a heated debate in Slovakia. The Finance Ministry's first proposal was for only 45 percent for the next year. Farmers as well as the Hungarian Coalition Party, which has a strong voter base in rural regions, were strongly opposed to the proposal.

"One percent of direct payments makes about Sk130 million (€3.25 million). We are still missing 6 percent and that is about Sk780 million (€19.5 million). This money is the easiest to get for farmers. It would be a pity to lose it," Nemec said.

Although Slovak farmers consider EU funds as necessary for survival, some economic analysts think the money could be better used.

"The year-on-year increase in expenditures on agriculture of 50 percent, while there are bad conditions in education and healthcare, is just a scandal," Ján Tóth, an analyst with ING, told The Slovak Spectator.

Zdenko Štefanides, an analyst from VÚB bank added: "In my view, subsidies earmarked for agriculture could indeed be better used in other sectors. The prime example is education - a sector offering positive effects in the wider economy.

"Generally, in a market economy, the role of subsidies is to correct market failures. In my mind, agriculture is not subject to market failures significant enough to warrant subsidies in their present form and scale," he continued.

Slovak farmers say that every EU country gets the subsidies and if they want to be successful in the EU common agriculture market they have to receive the subsidies.

"Only in this case are we able to maintain competitive prices. We cannot go further in decreasing production costs. The only advantage that we have right now is cheap labour. But from the long-term point of view we cannot rely upon this criterion. As long as the other EU countries have the subsidies, we have to have them to survive the common market," said Nemec.

According to him, subsidies and funds for farmers are not only about agricultural production. They have a multifunctional impact on the whole country and especially rural regions.

"Farming still fulfils the key role in maintaining rural life, settlement and cultivation. It is still one of the most important economic activities in the rural regions. It is also the base for other activities like manufacturing and commerce.

"Why would the EU put so much money into agriculture if this were not true? If there is nothing to do in the countryside the people will just leave it. This is already happening, for example in eastern Slovakia. The unemployment is high there and the inhabitants are moving to the towns," Nemec declared.

The SPPK emphasised that when Slovakia signed the EU accession treaty, it had to accept all the EU conditions, including support of the common agricultural policy. "The discussion should not be about those billions of crowns.

We should consider if we want to keep what we have signed," the chamber spokesman added.

Analysts do not agree that all the money coming from the state budget for agriculture is a result of the common agriculture policy. They warn that agriculture could become more of a political than a business issue.

"These minimum required levels of support are agreed on a supranational basis (the European Commission and EU Council of Ministers) in which Slovakia only has limited influence. Importantly, however, on a national basis, Slovak policymakers went beyond the minimum thresholds and agreed upon support to agriculture above and beyond the minimum required levels set by the CAP," explained Štefanides.

Robert Prega, from Tatra banka, thinks that the CAP itself is an example of non-effective expenditure and it results in high food prices anyway.

"On the other hand, it is understandable that farmers are trying in such a situation to get the maximum allowed level for subsidies. At the end of the day, the issue of direct payments is more political than economic.

"The current system of CAP is unsuitable for Slovakia and the whole EU. From the long-term point of view it is unsustainable. Despite this, radical reform of the policy in the near future is not realistic," Prega concluded.