THE EUROPEAN Women's Lobby is the largest non-governmental women's organisation in the EU. It serves as a link between political decision-makers in the EU and more than 4,000 women's associations in 15 member states.
When Slovakia acceded to the EU, Slovak women mobilised and formed their own umbrella organisation for women's rights groups: The Women's Lobby of Slovakia (ŽLS). The ŽLS is working with the European Women's Lobby towards a common goal: achieving gender equality in Europe. 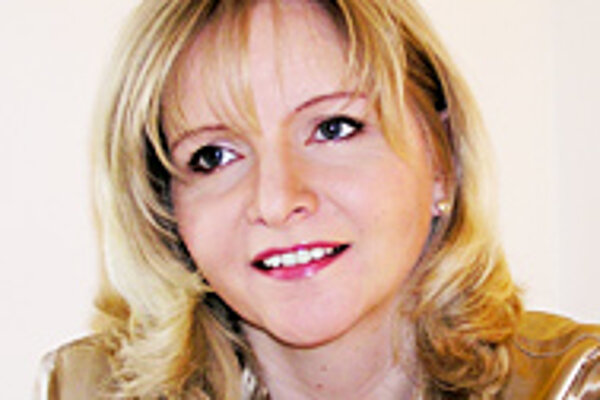 Font size:A-|A+0
THE EUROPEAN Women's Lobby is the largest non-governmental women's organisation in the EU. It serves as a link between political decision-makers in the EU and more than 4,000 women's associations in 15 member states.

When Slovakia acceded to the EU, Slovak women mobilised and formed their own umbrella organisation for women's rights groups: The Women's Lobby of Slovakia (ŽLS). The ŽLS is working with the European Women's Lobby towards a common goal: achieving gender equality in Europe.

Oľga Pietruchová, 42, was recently elected the ŽSL chairwoman. One of Slovakia's most vocal activists, known for her contributions to Možnosť voľby, a pro-choice group, and The Fifth Woman, an anti-violence organisation, Pietruchová appears ready and willing to tackle the issues facing women in Slovakia, and bring ideas to the EU table. On October 25, The Slovak Spectator asked Pietruchová what it was like to fight for women's rights in Slovakia.

The Slovak Spectator (TSS): There are 27 women's groups united under the ŽLS umbrella. Was it difficult to bring them together, or was it a spontaneous process whereby each group was eager to join?

Oľga Pietruchová (OP):It is mainly thanks to Dagmar Šimúnková from the Professional Women's Organisation that the ŽLS represents such a diverse group. Šimúnková did a lot of administrative work to put together Slovakia's various women's platforms, including the feminist platform (of which I am a representative), the professional and businesswomen platform, and Urobme (Let's do it). We really tried to make sure that women of all kinds would be represented, which is why the ŽLS includes groups for senior women, Roma women, and so on.

TSS: What do you make of the fact that there are so many different women's groups operating in Slovakia? What do you think are the main problems that Slovakia needs to address in terms of gender issues?

OP: Even though there are so many different groups, I think that the majority of my colleagues feel the way I do: that things are going backwards instead of forwards in Slovakia. I do not want to promote socialism by any means, but during those times, emancipation was part of the cabinet policy.

Currently, under the conservative cabinet [of PM Mikuláš Dzurinda], there is a shift towards traditionalism, which does not encourage women to participate in all fields of life. The EU considers gender equality to be a serious issue - it is a part of the Amsterdam Treaty. I think the ŽSL is especially important because we can communicate our ideas and needs directly to [the European Women's Lobby] without having to be censored by the Slovak cabinet.

The biggest problems facing us are those things that the EU institutions are powerless to enforce; issues that are left to each national government to address, such as reproductive health and rights, and violence on women. In Slovakia, conservative policies are being pursued.

TSS: How would you evaluate the Dzurinda cabinet in terms of addressing women's rights so far?

OP:I see an effort [in the Dzurinda cabinet] to downplay the importance of gender issues. I think the strong influence of the ruling Christian Democrats (KDH) is to blame. Just take the fact that the government has no female member. That doesn't stop our politicians from considering themselves a part of a "modern" government.

Even the Labour Ministry, which is directly responsible for women's issues, does not consider them important. Gender analysis has not yet been done for pension or social reform, although it is a part of EU policy and requirements.

TSS: Do you think things would automatically change if a left-wing cabinet took office?

OP: I fear that there is no left-wing party in Slovakia at all! Although Smer, for instance, makes policies along a social democratic line, the party is invisible when it comes to gender issues. I hope Smer will learn to take women's rights seriously and make it part of its international socialist platform.

But I am afraid that this lack of attention to women's issues stems from an arrogance of power that takes root after elections. My experience is that all discussion with the public and NGOs ends once votes are cast.

OP: Years. I believe that a society's development must be judged by how it treats its weakest groups. In Slovakia, the cabinet is sending the [recently passed] antidiscrimination law to the Constitutional Court [after the KDH attacked it as unconstitutional]. Is there a real will to solve the problems? Not that I can see.

In western Europe, such issues are on a much higher level. Women make up one half of the population, and no society can afford to be gender biased. If it is, then something is wrong.

TSS: What are the current concrete activities of the ŽLS?

OP: We are discussing a new family law with MPs that has been submitted to parliament and with which we are not at all content. The Justice Ministry [led by a KDH member Daniel Lipšic] drafted the law without the participation of either the Labour Ministry or relevant NGOs. The law is so strongly ideological that when I first read it, I was reminded of a religious doctrine rather than legislation coming from a liberal democratic state.

Some improvements have been made, but the law defines a family as one in wedlock. So, all other forms of family and partnerships - single or divorced parents, for example - are not recognized. We want to bind the state to support all forms of families, which, by the way, is EU policy.

OP: Unfortunately, this is not just a problem in Slovakia. Women have a tendency to work in sectors that are generally less well paid, such as in the public sector, while men largely work in the better-paid, private sector.

Also, Slovakia is traditional in that it perceives the role of women as mothers. Regardless of their education, women tend to limit their careers to make room for family. Also, women only rarely get to top positions because of prejudice and stereotypes. The well known "glass ceiling" for women still exists.

TSS: How do you define feminism?

OP: In my opinion, feminism means that women and men are equal human beings. Remember, women got suffrage in Switzerland only 30 years ago. In Germany, quotas for women in the workplace were a big novelty at first, but now, no one can imagine a German cabinet without female members.

It should be natural that women appear in top positions just like men; that they are paid according to their capability and competence and not on biological differences; that raising and caring for children is a matter for both men and women.

TSS: What does Slovak society risk if it ignores gender equality?

OP: Someone once said that by ignoring women, society loses half of its geniuses. Gender equality is not one of many possibilities; it is the only possibility for Slovakia, if our society is to develop.

TSS: What first motivated you to become an activist?

OP: I had my own business and so I knew about the problems women faced in that arena. My decision [to become an activist] firmed when abortion rights in Slovakia were threatened. Defending women's rights and influencing social change seemed more important and challenging to me than anything else I could do.

TSS: What do you think the future holds?

OP:We are a modern, liberal society. As much as the KDH might try, I think the EU framework and Slovak women will not let us slip into a becoming a gender-biased society.