Folk with a world twist

IN THE WEEK that Bratislava hosted its jazz festival, folk singer Zuzana Mojžišová, gave a live performance at Slovak Radio to christen her third album, entitled simply Zuzana Mojžišová. BBC radio saw fit to record the concert that took place October 18.
Mojžišová brings a world twist to the Slovak folk song and in this most recent venture, she plays music of such originality and scope that she could have been the opener for the eclectic jazz festival. 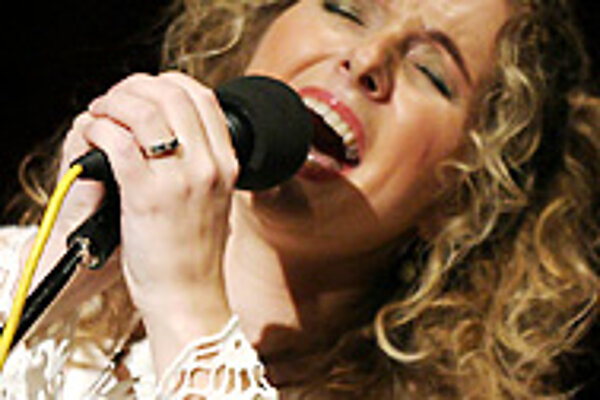 Mojžišová brings a world twist to the Slovak folk song and in this most recent venture, she plays music of such originality and scope that she could have been the opener for the eclectic jazz festival.

"It was my dream to get professional musicians together and bring them to this traditional genre," Mojžišová said.

The original songs that serve the basis for composition stem from the folk tradition, but the musicians plus Mojžišová give them such varied treatments the result defies classification.

Performers who joined the singer for the project include drummer Martin Valihora, guitarist Juraj Burian, violinist Stanislav Palúch, and bassist Oskar Rózsa - all of whom later performed at the jazz festival.

Mojžišová's was originally inspired by folk-rock. Later her attention switched to world music. With nothing of the kind at home to instruct her, she reached for inspiration abroad, to musicians like Värttinä, from Finland, and Farlanders, from Russia.

"I like to try new styles, different approaches," says the singer, who invited singer Iva Bittová and keyboardist Marián Varga to the live recording.

"The next phase of this project is to take it on the road with my concert band, as the guest musicians on the album are busy with their own projects. I plan to assemble the crew again sometime in spring and do a bigger tour around Slovakia and the Czech Republic. But it's just a dream at the moment," said Mojžišová, who talked to The Slovak Spectator shortly after the live concert.

The Slovak Spectator (TSS): How different is this album from your previous two?

Zuzana Mojžišová (ZM): The first CD was created out of joy, with enthusiasm and even naive passion. The second was more introverted; I began to choose the material more carefully. And for the third one, I decided to work with [CD's producer and double bassist] Oskar Rózsa, who liked my ideas a lot, and together we found the musicians we wanted.

This album is directed more towards the world [than to a local audience]; it can be compared with the music played by the Finish band Värttinä, or the Polish band Stilo. Its mighty, capacious sound distinguishes it from the previous CDs. This time we can talk about world music, before it was defined within ethno and folk-rock genres.

TSS: Is your intention to remain primarily in folk music?

ZM: Certainly. There are no written songs on the album; all arrangements originate from traditional songs with their authentic melodies, rhythms and texts preserved.

TSS: How far do you intend to go?

ZM: It's a difficult question. I myself don't know where it will move, if it does move. It depends on what people's reactions are. Because the music is a bit difficult, and the audience might shrink. On the other hand, the multi-genre scope of the music might open things up.

I'm interested in what the Slovak audience will say because people here have not yet learned to listen to world music, despite it being around for a long time in the Czech Republic and Hungary. The only other such band in Slovakia is Ghýmes, who perform in Hungarian.

TSS: How did you get into singing traditional music?

ZM: I sang and danced in folk ensembles from the age of five. Folklore left a visible mark on me. My parents both sang in the folk music ensemble Lúčnica; it was basically them who introduced me to this kind of music.

My relationship to folk developed over time. First, I attended folk ensembles and it was the pure, authentic folk that caught me. I did research in the field, searching for material in authentic settings. Later I discovered the genre of world music and I began to work on that.

Concerning my vocals, my mother is a singing coach. We still practise together. In the songs I try to adjust the colour of my voice - in some songs I use a strong folk voice, in others I try to soften it, shifting it to other levels.

TSS: What are the folk songs you choose? Where do they come from?

ZM: The song selection is the most important and takes the longest of the whole process.

I try to compile songs from various regions in Slovakia. I search for them in books and go over recordings in archives. I visit festivals of authentic folklore, the ones where you can still hear the old grannies singing, or find men singing when they're drinking - where you can feel the atmosphere and understand what the song is about.

TSS: Why did you decide to combine folk with other musical genres?

ZM: It seems to me that folk has been undervalued over recent years. During socialism they fed people with it on every occasion, which resulted in a kind of negative approach, especially for the middle-aged, and young people haven't found their way to it.

I like folk songs and appreciate them very much. I thought it would be a pity to just let it disappear, so I decided that by connecting it with different genres I might revive it, and in a spontaneous manner, bring it to those who don't yet feel warmly towards it.