"ROLL with it," Vincent (Tom Cruise) and Max (Jamie Foxx), the two main characters of Michael Mann's Collateral, repeatedly say to one another. And for years Cruise has done just that. One of the most successful actors in Hollywood history, he is also probably the one who is most routinely miscast. 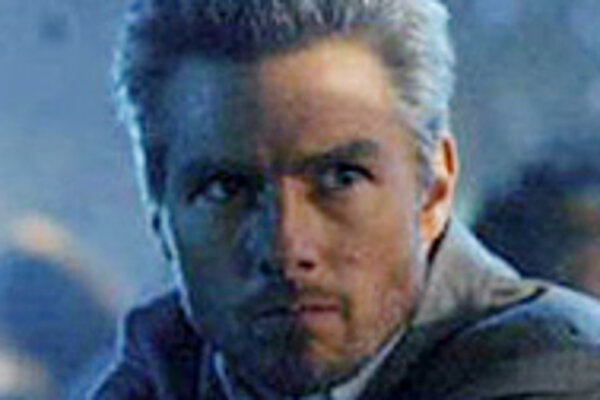 "ROLL with it," Vincent (Tom Cruise) and Max (Jamie Foxx), the two main characters of Michael Mann's Collateral, repeatedly say to one another. And for years Cruise has done just that. One of the most successful actors in Hollywood history, he is also probably the one who is most routinely miscast.

What is it about him? Do his all-American good looks cause people to blindly accept him as the hero, never mind that he is almost always unconvincing? Did people actually believe his macho routine in Top Gun? Did they really melt when, as Jerry Maguire, he proclaimed "You complete me"?

For some inexplicable reason, the public has continued to lap it all up, happily accepting the Tom Cruise that Hollywood directors have spoon-fed them. Finally, with 1999's Magnolia, a director saw through the bogus persona and recognised the true potential. Paul Thomas Anderson cast Cruise as a repugnant self-help guru full of unpersuasive macho bluster. And for once Hollywood's golden boy was a joy to watch - for most of the film at least. Unfortunately, it was quickly back to unimpressive business as usual.

Until Collateral, that is. As Vincent, Cruise plays a hitman whose ability to kill is aided by a striking lack of - and disregard for - emotion. Cruise, for whom displays of emotion have always been the Achilles Heel, is perfect - never missing a note, as he sadly did towards the end of Magnolia when his character is overcome by his emotional baggage.

Remarkably, despite Cruise's performance, the movie truly belongs to someone else. It's Jamie Foxx's movie, start to finish, and an excellent indicator of the great things to come - with his starring role in the highly anticipated, Oscar-buzz-spawning Ray Charles biopic just around the corner.

In Collateral he plays an underachieving cabdriver held back by his complacency. For 12 years he has driven a taxi deep into the night through the streets of Los Angeles, yet when asked about his work, he insists it's only "temporary". He dreams of opening up an exclusive luxury limo company, but claims he cannot do so until he makes the right contacts and gets the right cars. After 12 years of saving money and perfecting his knowledge of LA's streets, he still can't muster the courage to start his company.

When Max picks up Vincent, however, complacency and fear are no longer an option. After quickly recognising his cabdriver's intelligence, Vincent offers him a deal: Drive him around all night, make five stops, get him to the airport in the morning, and receive several hundred dollars.

What Max doesn't know when he grudgingly accepts the offer is that each of Vincent's stops is a person he has been paid to assassinate. Things quickly get messy and Max is unwittingly made an accomplice. Soon, a night that began so well - with the cabbie getting the phone number of Annie (Jada Pinkett Smith), a beautiful and successful young lawyer - becomes easily the worst night of his life.

He and Vincent are not without their playful banter, however. Each challenges the other's convictions. Max criticises Vincent for being so cold-hearted and calculating, while Vincent makes Max realise that there's nothing temporary about staying in a job for 12 years.

All of this talk takes place against a backdrop of menace - with the constant prospect of more people dying, some main characters included. The digital cinematography of Dion Beebe and Paul Cameron demonstrates this beautifully, capturing the neon-saturated seediness of the LA night.

As things get worse and worse, the characters realise that simply "rolling with it" will not suffice. For Jamie Foxx and for Tom Cruise, this fine film is a sign that rolling with it may no longer be necessary.