US election night in Slovakia

SLOVAK Prime Minister Mikuláš Dzurinda welcomed the re-election of George W. Bush as President of the United States, and congratulated the US Republican leader, saying that Bush's re-election was a "very good choice for Slovakia, Europe, and the world".
George W. Bush won the US presidential election November 2 with a slim 51 percent majority, revealing that although he will stay in the White House another four years, the US is a deeply divided nation, with 49 percent of American voters strongly opposing Bush's domestic and foreign agenda. 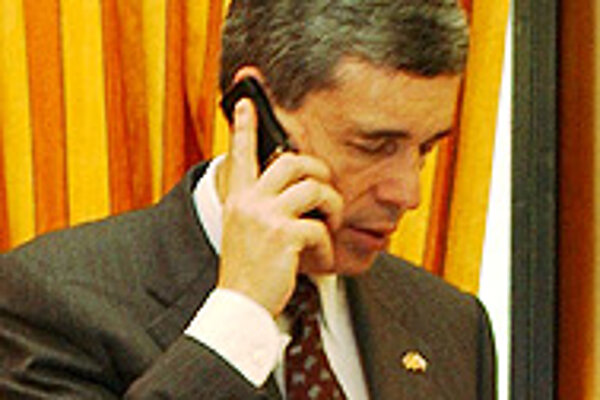 Font size:A-|A+0
SLOVAK Prime Minister Mikuláš Dzurinda welcomed the re-election of George W. Bush as President of the United States, and congratulated the US Republican leader, saying that Bush's re-election was a "very good choice for Slovakia, Europe, and the world".

George W. Bush won the US presidential election November 2 with a slim 51 percent majority, revealing that although he will stay in the White House another four years, the US is a deeply divided nation, with 49 percent of American voters strongly opposing Bush's domestic and foreign agenda. In an official statement to the press, Dzurinda said that the world needed a US president who would be a "leader who would successfully complete the fight of the international democratic coalition against terrorism".

"I am absolutely sure that President Bush is such a leader," Dzurinda said.

Slovak officials had been anxiously awaiting the results of the US election before Bush's rival, US Democratic Senator John Kerry conceded the presidential race November 3.

The US embassy and US Ambassador to Slovakia Ronald Weiser hosted an election breakfast at The Carlton Hotel in Bratislava. Guests included Slovak and foreign dignitaries, interested citizens and members of the press.

During the breakfast, election results were still too close to call. Slovak Foreign Affairs Minister Eduard Kukan said that no matter which US presidential candidate took the top seat, he did not expect radical changes.

"If Senator John Kerry takes office, I do not anticipate any changes in United States foreign policy toward Slovakia," said Kukan.

Later that night, after major US television networks announced the presidential election results, Slovak officials expressed their congratulations to Bush and the people of the US for their choice.

Slovak Prime Minister Dzurinda even described Bush as "a friend of Slovakia".

Foreign Affairs Ministry spokesman Juraj Tomaga told The Slovak Spectator that Minister Kukan expressed hope that "George Bush would become the first US president ever to visit the Slovak Republic".

"The Slovak Foreign Affairs Ministry believes that the [Bush] victory will help further strengthen transatlantic relations between the US and Slovakia," said Tomaga.

According to Tomaga, Kukan also hoped to improve bilateral relations between the US and Slovakia, including a possible cancellation of visa requirements for Slovak citizens.

Pavol Hrušovský, the speaker of the Slovak parliament and head of the ruling Christian Democratic Movement, welcomed the victory of conservative values in the US Senate and House of Representatives.

"The US election shows that it is really good for us to offer Slovak citizens the ideals and values based on Christianity, just as the Republicans did in the US election campaign," said Hrušovský.

The news of the Republican victory brought no smiles to the faces of the American Democrats in Slovakia.

Bill Quam, the chairman of Democrats Abroad, gallantly said that now is the time for US citizens to come together to find common ground and resolve the problems facing the nation and the world today.

After Kerry officially conceded the election, Quam told The Slovak Spectator November 3 that "the election is over but I am afraid the campaign to win the hearts and souls of all Americans is far from over".

Quam said, "It appears the divisive feelings that have marked the campaign are continuing. I feel we must face the fact that this divisiveness will continue until all Americans feel they are a part of the process of finding solutions for the many wars we face today.

"If we have any hope of winning the wars of terrorism, poverty, disease, global warming, refugees and ignorance, we must all feel we are a part of the solution.

"Unfortunately at present, only half of the American population feels that the solutions Bush is presenting for the wars we face are the right ones," he said.

Republicans living in Slovakia, on the other hand, were jubilant with the victory, purposefully downplaying the fact that Bush won by a slim margin and predicting growing ties between the US and Slovakia.

"The re-election of George W. Bush with a clear majority in an election having the largest turnout in American history shows that the American people trust President Bush, and want him to complete the tasks he has begun at home and abroad," Hank Jones, the chairman of the Republicans Abroad in Slovakia told The Slovak Spectator.

"The relationship between Slovakia and the United States of America can only grow stronger. The policies of the Slovak government towards tax and economic reform, NATO, and the war on terrorism are akin to the ideology of American Republicans."