Will nuclear promises be broken?

ECONOMY Minister Pavol Rusko's desire to change the course of the country's nuclear programme struck its first obstacle, signalling that the EU is taking Slovakia's pre-accession commitments seriously.
While Austria, Slovakia's environment-conscious neighbour, has not directly commented on Rusko's proposal to delay the closure of one nuclear reactor at Jaslovské Bohunice by two years, it has said that the dates for decommissioning the blocks are set and unchangeable. 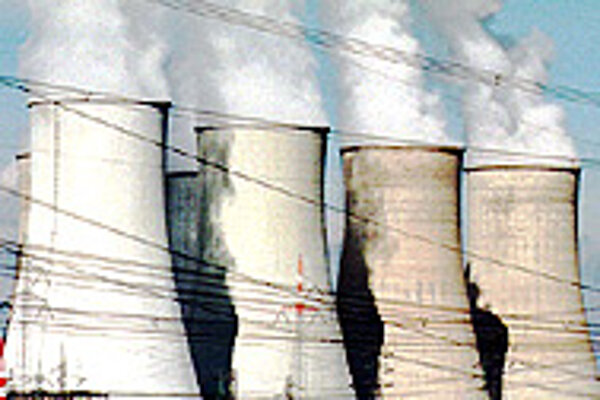 While Austria, Slovakia's environment-conscious neighbour, has not directly commented on Rusko's proposal to delay the closure of one nuclear reactor at Jaslovské Bohunice by two years, it has said that the dates for decommissioning the blocks are set and unchangeable.

Rusko argues that shutting down blocks 1 and 2 of the V1 nuclear power plant at Jaslovské Bohunice at the same time is a safer option than decommissioning them in subsequent years. The V1 plant is located 65 kilometres northeast of Bratislava.

"In 1999, the Slovak government made a commitment to close blocks 1 and 2 of the V1 nuclear power plant at Jaslovské Bohunice by 2006 and 2008, respectively. It must be assumed that the decision taken by the Slovak government took into account the safety of the Slovak Republic and adjacent areas," Austrian Deputy Ambassador Marian Wrba told The Slovak Spectator.

According to Wrba, all 25 nations that signed the Accession Treaty, which granted EU membership to the Czech Republic, Estonia, Cyprus, Latvia, Lithuania, Hungary, Malta, Poland, Slovenia and Slovakia, agreed that Slovakia would close down the first block of the V1 nuclear power plant by 31 December 2006, and the second block by 2008.

"The contracting parties also agreed to provide appropriate financial assistance to support the decommissioning and offset any [economic] consequences of the closure," Wrba added.

Under the agreement, Slovakia is guaranteed a sum of Sk16.7 billion (€410 million) in compensation, which it can draw from until the end of 2013.

Economy Minister Rusko told the daily SME that he believes that he can "open Austria's eyes" to see that the solution he proposes today is safer for the Austrian people.

Foreign Minister Eduard Kukan is not that optimistic about the possibility of reaching consensus with the European Union about simultaneously decommissioning blocks 1 and 2 in 2008. He says renegotiating what has already been agreed upon between 25 contracting parties would be a very complicated and laborious process.

"For the time being, nothing is changed. Slovakia's commitments are very clear and we expect that Slovakia will respect them," said Rico.

The European Commission spokesman said that any agreements made before accession would be difficult to postpone or modify.

However, should the European Commission receive a request by Slovakia to reconsider closure dates, the commission would carefully examine all the arguments and put the matter before the top council of each of the remaining 24 contracting parties, Rico told The Slovak Spectator. It would be up to the contracting parties to make the decision, he said.

One of those parties is Austria, and Austria says that the Accession Treaty outlining mutual and reciprocal obligations is binding.

"The protocol of this agreement is an integral part of the entire Accession Treaty that has been signed and ratified; it is therefore not negotiable. It is, as all other commitments that define membership in the EU, part of the EU primary law," Deputy Ambassador Wrba told The Slovak Spectator.

According to the daily SME, Figeľ has not registered one single positive reaction in Brussels to Rusko's idea.

Rusko maintains that expert opinion supports his desire to delay the decommissioning. He cited a detailed study by Relko, a firm widely recognised for evaluating the safety of nuclear power plants, which outlines the potential risks of two-stage decommissioning.

Rusko intends to send a group of experts to EU member countries to smooth the way for eventual negotiations. The team will include diplomats and nuclear energy experts.

"They will present our arguments and explain Slovakia's position," said the Economy Ministry's spokesman, Maroš Havran.

However, Havran stressed to The Slovak Spectator that the Economy Ministry would not pursue a decommissioning later than 2008, and that Rusko's proposal only offers an option, which would make the whole process 100 percent safe.

Havran said the Economy Ministry wants Slovakia to discuss the option with the EU member countries, and if any of the countries opposes Rusko's proposal, the issue would become irrelevant.

The Economy Ministry does not support the claims of opposition party Smer, which calls for prolonging the operation of both blocks of the V1 nuclear power plant until 2015, Havran told The Slovak Spectator.

The English translation of the Relko study has been submitted to Austrian firm Enconet for evaluation.

Meanwhile, the ruling coalition has not yet reached consensus about whether or not to support Rusko's idea.

The head of Slovakia's Nuclear Supervision Authority, Marta Žiaková, told the daily SME October 12 that the nuclear power plant was constructed as a two-block plant, and although joint decommissioning would be advantageous, the authority has already started planning phase one of the two-stage decommission.

A member of the board of directors of Slovenské elektrárne, Ignác Pňaček, told the news wire agency SITA that shutting down one block while maintaining operations at the other would not threaten the public's safety. He agreed, however, that it could present an increased risk.

Pňaček said that the increased risks are associated with refuelling the second reactor while the first one is shut down. Although there is always a risk with refuelling, the risk would double during the two-year period, from 2006 to 2008, when only one block would be operational. Pňaček based his statements on the Relko study.

Greenpeace, the international environmental organisation, claims that the V1 plant should have been closed in 1999. Stretching the reactor's lifespan to 2006 is, according to the group, already an enormous compromise.

Greenpeace spokesman, Juraj Rizman, told The Slovak Spectator that he is sceptical of Rusko's motives.

"We do not think it is a professional problem, but rather a political trick to keep the first block of V1 alive until 2008," he said.

Rizman encouraged Slovakia to uphold its obligations to the European Union and its neighbours.

"The Slovak government should not yield to lobby pressures and hysteria evoked by certain politicians," Rizman told The Slovak Spectator.