TWENTY-FIVE European heads of government gathered in Italy last week to sign the first European constitution. However, the spectacular ceremony at Rome's Cappidoglio Palace was overshadowed by uncertainty over the constitution's eventual ratification by the various member-state governments.
Not all EU nations are enthusiastic about the treaty. Nevertheless, European leaders were able to reach a consensus regarding the document following 28 months of protracted talks. 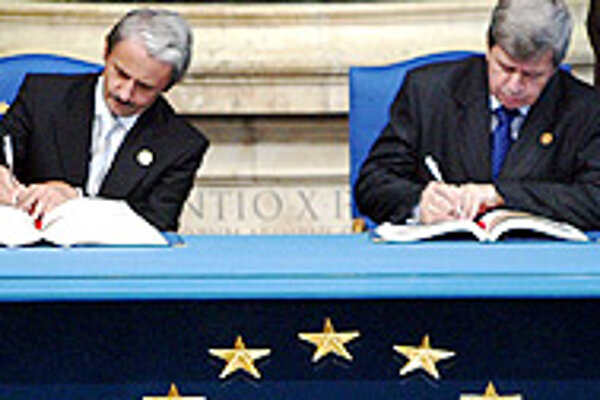 Font size:A-|A+0
TWENTY-FIVE European heads of government gathered in Italy last week to sign the first European constitution. However, the spectacular ceremony at Rome's Cappidoglio Palace was overshadowed by uncertainty over the constitution's eventual ratification by the various member-state governments.

Not all EU nations are enthusiastic about the treaty. Nevertheless, European leaders were able to reach a consensus regarding the document following 28 months of protracted talks. It is this version of the constitution that was signed October 29 in Rome.

The signed European constitution requires ratification by all EU member governments before it can take effect in 2007. Consequently, rejection by any one country could derail the project.

Although the Slovak Constitution clearly says that the right to sign international treaties belongs to the head of state, President Ivan Gašparovič, after a brief hesitation, decided to delegate the right to the government.

"After the EU constitution is signed in Rome and the Slovak parliament ratifies it, the president will have to put his signature on it as well. This means that I do not have to go to Rome," Gašparovič told the media just before celebrations in Rome got underway.

After Dzurinda and Kukan returned home, constitutional lawyer Radoslav Procházka unexpectedly said that the Slovak signatures on the EU constitution are not in line with the Slovak Constitution. Procházka's centred his argument on a technicality.

The lawyer says the president's delegation of power to Dzurinda and Kukan on behalf of the Slovak government, which was signed the day before the Ministers left for Rome, becomes law only at the moment it is published in the Slovak collection of laws.

Gašparovič is convinced that he has not breached the law. "We acted correctly and in accordance with the constitution," the president's spokesman, Marek Trubač, told The Slovak Spectator.

"If Prochazka is persuaded about his truth, he is welcome to explain his position or turn to the Constitutional Court," Trubač said.

In response to Procházka's objection, the president has charged Milan Čič, a senior governmental official, to prepare a legal analysis of the situation. Trubač told The Slovak Spectator that the analysis will be provided to the media upon completion.

Slovak Foreign Ministry spokesman Juraj Tomaga told the SME daily that "from our viewpoint everything is all right".

At this time, the outcome of the expected legal dispute over the constitutionality of the Slovak signature is out of sight.

Slovakia could be among the first nations to ratify the European constitution.

Just six days after providing his signature, Prime Minister Mikuláš Dzurinda asked Slovak lawmakers to ratify the European constitution, a copy of which is in parliament.

Prime Minister Dzurinda sees no reason to worry about the constitution's fate in the hands of Slovak lawmakers. In a marathon session of political negotiations, he won sufficient backing from opposition parties. The Movement for a Democratic Slovakia (HZDS) and Smer both pledged support, together with a portion of independent deputies. Free Forum, another opposition party, is considering supporting the constitution as well.

Dzurinda's cabinet recently decided that Slovakia would not hold a referendum (a vote determining public opinion on a question of national importance) before officially ratifying the constitution.

Cabinet ministers agreed that it would be enough if a constitutional majority of three-fifths, or 90 deputies in the 150-seat Slovak parliament, endorsed the document.

The only member of the four-party ruling coalition against having the European constitution ratified in parliament is the conservative Christian-Democratic Movement (KDH).

The KDH maintains that by ratifying the European constitution, Slovakia would enter into a state union. The KDH insists on final approval from the Slovak public.

The KDH is trying to persuade Slovak lawmakers to agree to a referendum.

"Our constitution enables ratification [of the treaty] in parliament. The Slovak constitution was not endorsed in a referendum either," Dzurinda answered back.

Contrary to Dzurinda, the speaker of parliament and Christian-Democrat leader Pavol Hrušovský is calling for an extensive discussion prior to the ratification. He wants input from both political parties and Slovak citizens.

Dzurinda's cabinet, however, is not prepared for a campaign. The Prime Minister thinks that adequate discussion has already taken place on the issue, during the 28 months that it took European nations to tailor the constitution into its present form.

According to Dzurinda, enough has been said. "We could endlessly torture ourselves over whether the public has enough information," said the Prime Minister.

Dzurinda said that while there is no reason to rush to ratify the European constitution, he sees no reason for delay. "Why should we wait?" Foreign Ministry spokesman Juraj Tomaga told the news wire agency SITA.

In line with his duties as speaker of parliament, Hrušovšký wants to reserve adequate space for political and constitutional debates on the constitution ahead of the parliamentary vote to allow deputies to come to a "responsible and informed" decision.

Dostál called on parliamentary parties to "not make a race" of the ratification process.

At least nine EU nations plan to hold a referendum on the European constitution, including Britain, where opinion polls show two-thirds of the electorate oppose the constitution.

If ratified by all 25 EU member states, the European constitution would result in the creation of a long-term president of the European Council and a joint foreign minister.

The aim is to simplify decision making on common EU issues and extend greater power to the European parliament.

TURMOIL surrounding the incoming European Commission headed by Jose Barroso October 27 somewhat dampened the mood at the Cappidoglio Palace in Rome, where the European constitution was being signed by 25 European heads of government.

At the last minute, Barroso decided to withdraw his team from the European Commission investiture ceremony in which the European parliament would confer authority on Barroso's staff appointments. Barroso wanted to avoid rejection of his nominee for Justice and Security Chief, Italy's Rocco Buttiglione.

Buttiglione outraged members of the European parliament by his conservative views on homosexuality and marriage and it was unlikely that the body would approve his nomination. German Prime Minister Gerhard Schroeder downplayed Barroso's withdrawal, saying that a new European Commission would be approved in a few weeks.

Buttiglione has since declined the position. Latvia's Ingrida Udre dropped out of the Barroso team as well.

Slovakia Interior Minister Vladimír Palko, who sits in the cabinet for the KDH, told the TA3 news channel that he identifies with Buttiglione's position that homosexuality is a sin.

The Slovak Minister thinks that homosexuality is a topic that does not belong in politics. He is against recognition of registered homosexual marriages.