AT THE DARK edge of the highway on the outskirts of Košice's old centre I am sitting in a barn eating dinner with a wooden spoon. In hushed tones I am told that former President Rudolf Schuster will be stopping by later in the evening. Stodola, however, is no murky spot for backroom deals; it is a restaurant that serves down-home traditional Slovak fare with an untraditional flair for luxury. 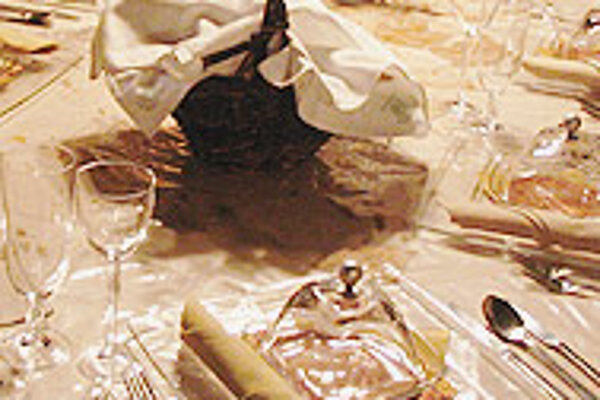 AT THE DARK edge of the highway on the outskirts of Košice's old centre I am sitting in a barn eating dinner with a wooden spoon. In hushed tones I am told that former President Rudolf Schuster will be stopping by later in the evening. Stodola, however, is no murky spot for backroom deals; it is a restaurant that serves down-home traditional Slovak fare with an untraditional flair for luxury.

Owner Igor Klima opened Stodola in 2001 in the empty loft of the building, which houses his Mercedes dealership - hence the name, which means barn. Since then it has risen in regard to stand among the top restaurants in Slovakia.

But Stodola takes its luxury image light-heartedly. For example, its top sirloin, served with garlic, tomatoes, oštiepok (a smoked sheep cheese), and Tatra potatoes, is named the Steak of Slovak Millionaires. At Sk305, more than a few can indulge in the fantasy its name bestows on its diners.

Dinner starts with a couvert - a selection of sliced strips of soft dough rolled with cheese or pa#té, which, be aware, is included in your bill. A sample of the soups that follow includes a perfect mushroom cream soup or the risky-sounding but very palatable bean soup with smoked knee.

For main courses, specialities abound. There is the Spanish Bird, which has nothing to do with Spain or birds - it is a slice of beef tied around bacon, cucumber, and egg. Or there are balls of potato dough filled with smoked neck in a sauce of sour cabbage, sour cream, fried bacon, and onions, a dish from the Gemer region. Others go by more fanciful names like Gypsy's Dream, Old Maid's Braid, and Elephant's Ear.

And of course there are the classic bryndzové halušky and its eastern equivalent, spišské pirohy. The latter, dough dumplings filled with bryndza sheep cheese and covered in a sour cream sauce, were the most tender, fluffiest examples of their kind that I have encountered in Slovakia, or Poland, the reputed pirohy capital of the world, for that matter.

Meanwhile, the restaurant can be reserved for special occasions or a special menu, like a roast goose, turkey on bacon, or chicken a day in advance.

In addition to Schuster, Stodola has hosted many prominent figures. From politics the list includes ambassadors from Canada, Ukraine, Italy, and the United States. Of celebrities, the son of Charlie Chaplin has paid the bar a visit, as have many Slovak stars, all of whom have signed the restaurant's guestbook.

It must be the food that draws such figures out of the city centre, where the fancy restaurants concern themselves more with French and Italian cuisine (and do not know how to make one or the other, Klima snipes). Stodola, meanwhile, takes traditional Slovak cooking as far as it will go. Dining like a peasant has never been so refined.

The restaurant's location is perhaps its biggest downfall, especially for tourists, as a car and a city map are a necessity.

Why locate a restaurant here? Klima's logic is simple: "Rather than convert this space into an office, I decided to open a place where my clients could go to celebrate the purchase of their new Mercedes."

If the horses in this barn are luxury cars, could you expect anything less of dining in the hayloft upstairs?