New music for a new Slovakia

MEREDITH MONK, the renowned American contemporary musician, played to a sell-out crowd as she opened the Evenings of New Music festival at Bratislava's Astorka Korzo Theatre October 25. Monk's original vocal performance, set against various musical genres, was rapturously received by the audience. Movement and mime added to the intensity of the show. 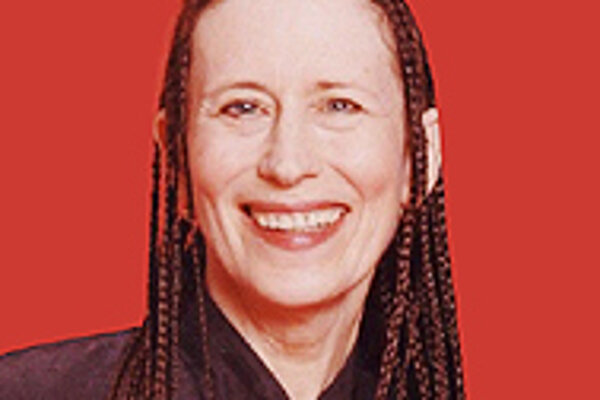 Font size:A-|A+0
MEREDITH MONK, the renowned American contemporary musician, played to a sell-out crowd as she opened the Evenings of New Music festival at Bratislava's Astorka Korzo Theatre October 25. Monk's original vocal performance, set against various musical genres, was rapturously received by the audience. Movement and mime added to the intensity of the show.

Based on previous experience, the popularity of the show, Monk's first in Bratislava, surprised the festival's organisers. They are used to low attendances at Evening of New Music events, the main part of which starts November 10 at Studio 12 on Jakubovo Square.

"It's standard that world-famous people are unknown in Slovakia. It has happened that a personality [in music] sold out concerts across Europe and here, in Bratislava, only a few people came," said Daniel Matej, the festival's organiser, musician and pedagogue, while joking that nobody need fear not getting a ticket.

Matej puts down the low turnouts to the country's 40 years of isolation under communisim. Moreover, the whole territory of the former Czechoslovakia has long been swallowed by its capital, Prague, the centre of cultural life, which has hosted Monk, for instance, several times. The trend, though, has hardly changed.

"A decade ago, I thought that the situation would rapidly change. But it did not happen," said Matej, admitting that this year was the second time he and his colleague Peter Zagar had wanted to cancel the festival.

"We didn't do it, because we still have that feeling that we haven't said everything."

Though small in scope, the regularly held festival keeps pace with other European cities in presenting contemporary music trends. In its programme it presents various versions of today's music side by side.

This year the festival celebrates the 130th anniversary of the birth of Charles Ives and Arnold Schönberg, two composers who significantly influenced 20th century music. The messages from their works will resonate in the festival's seven performances.

The event's highlight, Tone Roads, is a mosaic of 3-minute entries from 24 Slovak and foreign composers, who based their pieces on Schönberg's 5 Klavierstücke and Ives's Three Page Sonata. One of the featured Slovak composers is the recently deceased Juraj Beneš, whose opera The Players was just added to the Slovak National Theatre's repertoire. Belgian pianist Daan Vandewalle will come to premiere the team project November 26.

Tone Roads follows similar attempts in the past. In 1995 the organisers initiated a piano montage inspired by Erik Satie. In 2000, Johann Sebastian Bach's music bound together several musician-composers.

Related to the idea of the "musician-composer", is the Charlie's Whiskers orchestral project, by Australian violinist Jon Rose, specially commissioned for the festival. The improvisational and multi-media performer Rose will present it November 11, joined by the Bratislava Chamber Soloists and the Veni ensemble, under the baton of rising talent Marián Lejava.

Rose will also open the festival's November section. As one of the most significant improvisors, he is the guest of the Bratislava's Vapori del Cuore, playing improvised music. The ensemble will also be present at the closing event November 27, this time featuring the Belgian pianist Vandewalle.

Other performances will feature mezzo-soprano Gerrie de Vries and soprano Nao Higano, pianists Andrea Mudroňová and Ivan Šiller (both of whom studied under Vandewalle), and the Czech contemporary music ensemble MoEns.

In the past, the festival hosted such musicians-composers as John Cage, John Oswald, Christian Wolff, and Otomo Yoshihide. Cage, who performed in Bratislava the year he died, 1992, was among the few to attract a large audience.

"The percentage attending these concerts is only slightly higher than it was [after the revolution]," Matej said.

Based on his cross-cultural experience, he says Slovaks are not a curious nation, seeking culture abroad much less than their Polish or Czech neighbours. "Slovaks are too conservative. And musicians are the most conservative of artists. It is as if the [modern] European, world music spirit has not touched them at all."

With a patient approach, regular explanation, and promotion of new musical trends, Matej aims to stir the conservative waters, which, he predicts, might take a generation or two. And one of the tools helping him and Zagar in achieving the mission, is this festival.

"We don't know how long we want to continue. But we want to awaken people's curiosity," said Matej.

Evenings of New Music runs at Studio 12, Jakubovo námestie 12, Bratislava. Tickets (Sk50 and Sk100) are on sale an hour before the concert starts. For more information visit www.vecery.info.