THE ORGANISATION for Economic Cooperation and Development (OECD) published figures on Slovakia's unemployment rate that are more pessimistic than those released by the country's national labour office.
The OECD claims that the number of people without jobs in Slovakia has swelled since last year and that the rate now exceeds 18 percent. Based on OECD calculations, only Poland has a higher unemployment rate among members of the OECD, which some call a "club of the wealthy". 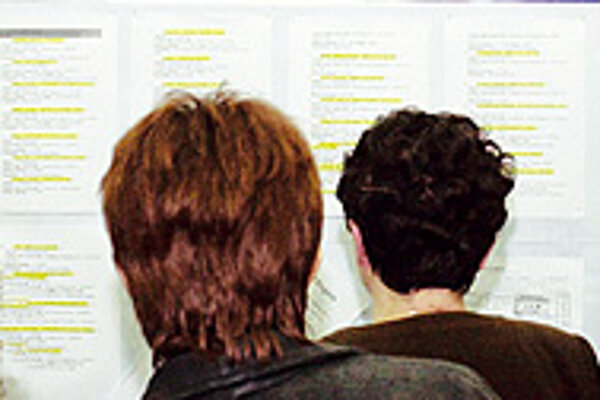 Font size:A-|A+0
THE ORGANISATION for Economic Cooperation and Development (OECD) published figures on Slovakia's unemployment rate that are more pessimistic than those released by the country's national labour office.

The OECD claims that the number of people without jobs in Slovakia has swelled since last year and that the rate now exceeds 18 percent. Based on OECD calculations, only Poland has a higher unemployment rate among members of the OECD, which some call a "club of the wealthy".

The OECD is a members-based organisation for countries sharing a commitment to democratic government and the market economy. It is well known for country surveys and reviews.

Slovak officials say the OECD's unemployment data does not fully mirror the reality in Slovakia. They maintain that developments on the Slovak labour market are positive.

"The reality is different [than what the OECD survey suggests]. Unemployment has not increased in Slovakia. The OECD bases its findings on data collected by statistical offices that is from May, and today we have November," the country's Labour Minister Ľudovít Kaník told The Slovak Spectator in an interview.

The National Labour, Social Affairs and Family Office uses a different methodology than the OECD for calculating unemployment. It calculates the jobless rate based on the number of those registered as unemployed at labour offices throughout the country.

The OECD, along with the Slovak Statistics Office and Eurostat, the European Union's statistical agency, include everyone who is unemployed in their calculations, whether or not they are registered at Slovak labour offices.

"The other [differentiating] factor is that the Slovak Statistics Office includes students, pensioners and even women on maternity leave among their ranks of the unemployed. We stick very exactly to the records of the labour offices. This data says that last month, the unemployment rate for the first time ever sunk below 13 percent to reach 12.9 percent," Kaník explained.

On October 14, the National Labour Office reported that the registered unemployment rate in Slovakia fell 0.1 percentage points in September to 13.14 percent. It arrived at this rate by calculating the number of job seekers ready to take up a job immediately, which came in at 344,091 at the end of October - 2,600 fewer than the previous month.

The total number of registered unemployed people, including those on sick leave or taking part in qualifying courses, decreased by almost 1,600 in August to stand at 379,811 in September - 73,000 fewer people than in December 2003. September's jobless rate, according to the National Labour Office, was 14.51 percent.

While the unemployment rate appears to be sinking for now in the Labour Minister's book, Kaník explains that the winter months, just as in other countries around the world, might bring a seasonal increase in unemployment because of seasonal closures of various offices and projects. But Kaník thinks it will be temporary.

He expects unemployment to drop further next year when new investments start to have a visible impact on the economy in the form of new hires.

"We are still in the process of healing big companies, and that has caused massive layoffs, for example, in the railways, the state forest management company and the telecommunications industry. Despite this, the market is still able to absorb the job losses, and that is a success," Kaník told the Spectator.

The EU's Eurostat agency claims that eastern Slovakia has 21.8 percent of its population out of work, the 10th highest unemployment figure in the EU.

According to the agency, this proves the deepening gap between Slovakia's wealthy western region and needier eastern region.

Across the EU25 regions, unemployment averaged 9.1 percent in 2003.

Slovakia has another region with a jobless rate higher than 18 percent. Eurostat figures central Slovakia has 20.5 percent of its people out of work.

The agency said that the 2003 unemployment rate in western Slovakia and Bratislava stood at 15.9 and 7.1 percent respectively.

The European Commission bases its calculations on Eurostat.

Slovakia is maintaining a high economic growth. However, the growth is not creating as many new jobs as analysts expected.

Many blame the lack of job creation - and thus the high unemployment rate - on high payroll taxes, which are levied to cover social services, including disability and pension insurance.

The World Bank has recommended that Slovakia consider lowering its payroll taxes rather than trying to further reduce income taxes.

In Slovakia, the CIT is at 19 percent, one of the lowest rates in Europe.

The Labour Ministry has pointed to recent reductions in payroll taxes, which appears to follow the World Bank's advice.