THE BRITISH International School in Bratislava is seven times bigger today than it was when it first opened in 1997 with 40 students. The reason? A growing group of expatriates and new generation of Slovaks interested in rearing their children on English.
Until recently, the school was bursting at the seams, requiring a reorganisation of school premises. 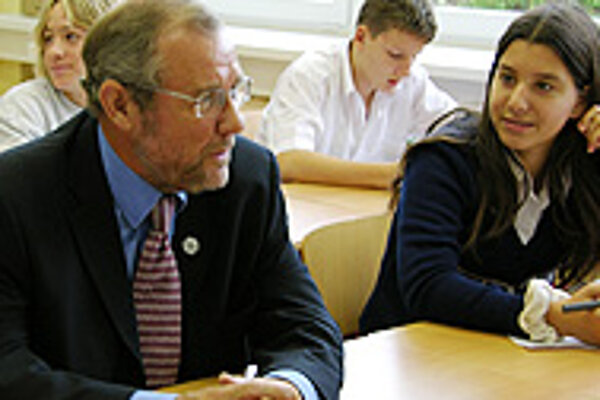 Font size:A-|A+  Comments disabled
THE BRITISH International School in Bratislava is seven times bigger today than it was when it first opened in 1997 with 40 students. The reason? A growing group of expatriates and new generation of Slovaks interested in rearing their children on English.

Until recently, the school was bursting at the seams, requiring a reorganisation of school premises. In September 2004, just before the start of the school year, the high school moved to new facilities, allowing the British International School to expand its secondary school programme.

All told, the British International School has 293 pupils representing 25 different nationalities enrolled in its curriculum. Slovak nationals make up the largest single group, accounting for 30 percent of the student body.

"We provide lessons in Slovak history, culture, geography, and language," Headmaster Peter Radoja told The Slovak Spectator. According to Radoja, all students, not just Slovaks, learn the basics of the language.

"We encourage everyone to speak English during the school day, even if they are of the same nationality, because that is how they will develop their language skills," Radoja said.

For most parents, an English-language programme is one of the main reasons they send their children to the school.

"As an international school, we value individuality and aim to develop within our students a knowledge and understanding of the differences and commonalities between the peoples of the world," Radoja told The Slovak Spectator.

Pupils are as young as 2; the oldest are 17. The final two years of study at the British International School follow courses that lead to the International General Certificate of Secondary Education of the University of Cambridge Local Examinations Syndicate (IGCSE).

IGCSE courses are studied each year by hundreds of thousands of students in international schools all over the world. Examination papers are sent from England and, after completion under strict examination conditions, are returned to Cambridge for marking.

University of Cambridge certificates are issued to successful candidates. These certificates are a passport to further education around the world, for example, for entry into British Advanced Level courses, the International Baccalaureate Diploma programme, and other college courses.

"So far we have had few students completing their final year with us, mainly because, in the beginning, we were a small school. As we grow and our student body matures, we expect more students to graduate with us in the future," said Radoja.

"I am sure we will expand. We expand every year. Partly, it reflects success of the school and partly it reflects that more Slovaks are putting their children in private schools. The number of Slovaks in our school increases every year. Also, the expatriate community is increasing because Slovakia is going more international. More investors and international companies are coming here," Radoja said.

Is the British International School competing with Slovak public or private schools? Radoja does not think so, since people who enrol their children in BIS want to educate them according to international standards in English. So far, the Slovak school system does not provide such an education.

Nord Anglia Education Group is the main shareholder and founder of the school. The tuition is based on the English National Curriculum. The school is registered with the Slovak Ministry of Education, and is a full member of the European Council of International Schools.

Nord Anglia Education Group, established in 1971, owns many schools around the world. Other international schools belonging to the group are the British International Schools of Berlin, Budapest, Moscow, Kiev, Dnepropetrovsk, Shanghai, and Ho Chi Minh City, the English International School Prague, and the British School Warsaw. Radoja says the group established a school in Slovakia because the market showed development potential.

"[Nord Anglia Education Group] also had schools in other central European countries and wanted to open a school in Slovakia as well. I must say that the success of the school exceeded our expectations," Radoja said.