History past and present

PEOPLE say that his history books are like detective stories. He says they ARE detective stories.
Historian Pavel Dvořák takes the monotonous facts, dates and names of history and turns them into narratives that enthral. He makes history relevant and enjoyable - to expert and amateur alike.
He has written over 20 books. The three volume set Stopy dávnej minulosti (Traces of Ancient History) is a best seller in Slovakia. He plans a fourth book to complete the set. 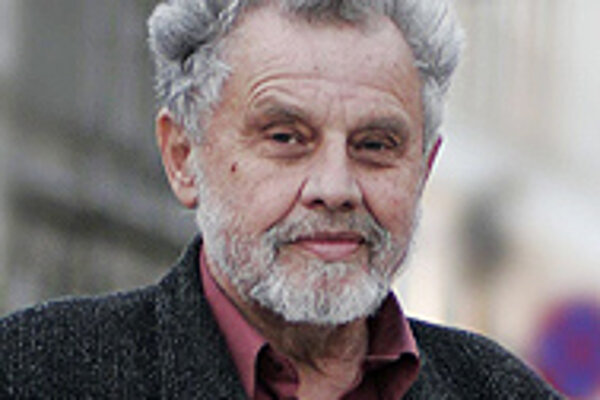 Historian Pavel Dvořák takes the monotonous facts, dates and names of history and turns them into narratives that enthral. He makes history relevant and enjoyable - to expert and amateur alike.

He has written over 20 books. The three volume set Stopy dávnej minulosti (Traces of Ancient History) is a best seller in Slovakia. He plans a fourth book to complete the set.

He founded the publishing house Rak, which specialises in publishing history books, and has made more than a hundred TV documentaries. Though born in Prague, in 1937, he has lived in Slovakia almost all his life, elucidating the country's history.

Earlier this month Dvořák collected the Vojtech Zamarovský Prize for life-long achievement in non-fiction. The Slovak Spectator spoke to him on the occassion.

The Slovak Spectator (TSS): Has anything happened over the last few hours or weeks that historians of the future will find fascinating?

Pavel Dvořák (PD): You can never tell. Many people have thought that they have witnessed history in the making but they were wrong.

TSS: Do you write about contemporary history?

PD: The biggest danger in history is when it gets mixed with politics. And the more recent the history is, the more politicised it is. But history has always been politicised. Subjects such as Greater Moravia, Cyril and Method and the Hungarians are all strongly politicised. It is very difficult to distinguish between what is politics and what is history in these cases.

I have written a book of quite modern history, Kto zabil Viliama Žingora? [Who Killed Viliam Žingor?], a story of a partisan captain who was executed during the trials of the 1950s.

Also, in my Zlatá kniha Bratislavy [Golden Book of Bratislava, published in 1993, the year when Czechoslovakia split], I finish with the year 1993, which put me under great pressure, until I no longer knew if I was writing a history or something political.

TSS: How difficult was it to write the book on Bratislava?

PD:My ambition was to do a book on contemporary events. I managed, thankfully, to finish it wisely.

The last chapter, called Two Squares, tells the story of two groups of people. One group gathers at the SNP Square - the supporters of an independent Slovak state. The other meets at Vajanského nábrežie [next to the statue of the lion outside the Slovak National Museum in Bratislava] - these are the advocates of Czechoslovakia. I end with one simple fact: "One of the squares won."

Now I hope to publish the fourth [updated] edition of Zlatá kniha Bratislavy, but I'm afraid.

TSS: What do you fear?

PD: Politics, because recent history is all about politics. But I will publish it because I think history should never end. There are historians who finish their books, or start them at a certain date. Until lately it was said that history started with the Great October Revolution. I do not approve of such an approach to history.

TSS: At what particular date do you plan to end this new, fourth edition?

PD: I will finish it with Slovakia's entry into the European Union. I point to the fact that Slovaks, who have always lived in a multi-national state - Greater Moravia, the Hungarian monarchy, the Slovak Republic - have something in their genes that makes them feel good in a multi-national environment, as is Europe.

TSS: Once you said that Bratislava, compared to other European capitals, does not have its own "Curriculum Vitae". Do you think this book is that CV?

PD: I think so. Bratislava has an unbelievable history because of its location. It's a city built on big rivers, large lowlands, and mountains; on an island perfectly protected by water from three sides and from the other by mountains.

Ten years ago I said to myself that in the history of Bratislava I would try to represent the history of the whole of Slovakia. There was no significant historical event in Slovak history that would exclude Bratislava.

TSS: So Bratislava's debt was paid. Now you are working on a fourth volume of the Stopy dávnej minulosti (Traces of Ancient History) series, which will discuss the life of the Slovaks in the Hungarian monarchy.

PD: Yes, it will be called Slovaks in the Hungarian Monarchy and the volume will culminate with the recognition of Slovaks as part of the Hungarian monarchy.

TSS: To what extent do you think you are helping Slovaks understand their history? They often complain that there is no Slovak history, as if they feared it, avoided it.

PD: Yes, that is true. As I said, history is a political weapon. And in Slovakia, during certain times, history was used as a political weapon. This shattered people's trust, especially the young, and discouraged them from studying their history. I try to make history seem like an adventure. And people like that.

TSS: You have been awarded the Vojtech Zamarovský Prize. What does it mean to you?

PD: Vojtech Zamarovský is my teacher and friend, a person I appreciate a lot. He is a great writer, whose books I started to read as a student. We have cooperated on several subjects - me from the Slovak viewpoint, he from the world viewpoint.

TSS: While you have tried to present Slovak history, Zamarovský has explored the history of other parts of the world. But neither of you was born in the places you write about. Do you think it is necessary to have a distance to write the history of a certain nation?

PD:Nations are usually very happy when an outsider is processing their history. The Greeks are happy for sure; Zamarovský's Greek Miracle was published in Greek and the Museum of Ancient history in Trenčín was established thanks to the Greek president.

I cannot say how happy Slovaks are that I write about their history. But when I got to know the Slovak cultural environment I could clearly see what was missing: historical knowledge.

As you said, Slovaks sometimes shun their history, but this has to change. One has to know one's roots. One has to belong somewhere, one cannot live one's life in a vacuum.

TSS: Do you consider yourself to be Czech, Slovak, or European?

PD: Well, blood is not water. I am Czech, but I have lived here over 60 years.

I am Czech by origin and Slovak by having lived this life.

TSS: In cooperation with photographer Karol Kállay, you have published a book on the Blood Countess living in Čachtice Castle. Why not do something similar on the local folk hero - Juraj Jánošík?

PD: We thought about it, but we went our separate ways.

TSS: Why not do a project on Jánošík on your own?

PD: I will certainly get back to the idea one day. Jánošík is a legend and a part of history. The latter is embedded in the first.

The Jánošík legend began to form soon after his death by people who had known him. It focuses mainly on his death, but misses the essential point - Jánošík was not an outlaw, he was a rebel, and he helped in Rákóczy's uprising. He used to be Rákóczy's soldier, a kuruc.

It was forgotten that during questioning he refused to reveal the names of the rebels, and this is what is most admirable about Jánošík. That even though he was tortured close to death he did not reveal any names and his accomplices had nothing to fear.

This is where his legend touches reality.