AS THE COUNTRY celebrates 15 years of democracy after the November 1989 collapse of communism, the nation seems split over its assessment of post-communist developments in Slovakia.
Various polls released for the 15th anniversary of the Velvet Revolution suggest that a large percentage are dissatisfied with the material aspects of their lives, and many are disappointed with Slovakia's development after 1989. 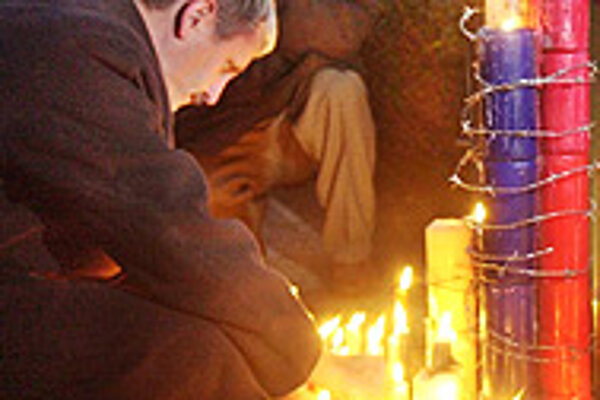 Font size:A-|A+0
AS THE COUNTRY celebrates 15 years of democracy after the November 1989 collapse of communism, the nation seems split over its assessment of post-communist developments in Slovakia.

Various polls released for the 15th anniversary of the Velvet Revolution suggest that a large percentage are dissatisfied with the material aspects of their lives, and many are disappointed with Slovakia's development after 1989.

Although nostalgia for communism remains, analysts say few would want the regime back.

"The nostalgia for communism definitely exists but a vast majority of people, even those who are left-wing oriented, do not want communism to return," Michal Vašečka, an analyst with the Institute for Public Affairs told The Slovak Spectator.

Vašečka explained several reasons for the nostalgia. "As people grow older, they have a tendency to slide into memory optimism, such as 'We were young and handsome then' and 'We had good times' even though the period as such was terrible," Vašečka said.

He also said that communism had a way of feeding people's dependencies because the regime decided for them and removed the burden of personal responsibility from their shoulders. People were not free, but neither were they to blame.

"People were poor but more or less equal and taken care of in social terms," he said.

Although Vašečka thinks communism has no chance of making a return, pessimism about the new democratic system in Slovakia remains strong.

According to a poll carried out by the MVK agency, 58.8 percent of respondents were not satisfied with the development of Slovakia after 1989. Although the figure is high, it is 6.4 percent lower than five years earlier, in 1994.

The poll also showed that as many as 65.8 percent considered their living conditions to be worse than before November 1989, up from 56.3 percent in 1994.

In 2004 a total of 65.1 percent of respondents thought that the current social and economic establishment had more drawbacks than advantages, up from 42.8 percent in 1994.

Another poll carried out by the Slovak Statistics Office showed that post-1989 development did not fulfil the expectations of 39 percent of respondents - six percent less than a similar survey conducted five years ago.

"Much of the frustration results from bad reference points used by respondents. Slovaks tend to compare themselves with Germany or Austria or other developed western democracies. Thus, frustration is inevitable," said Vašečka.

Celebrations, concerts, and meetings were held across the country November 16 and 17 to commemorate the country's freedom.

In Bratislava, rock bands performed to a crowd of 100 or so at SNP Square on November 16. Still, the event seemed tiny compared to the thousands that packed SNP Square 15 years ago to bid farewell to communists.

A big screen showed clips from the November 1989 uprisings intermixed with taped interviews with today's 15-year-olds who talked about what they knew about November 1989.

"I heard that back then, even more people gathered at SNP Square than when Slovakia won the ice hockey world championships [in 2002]," said one kid.

Coinciding with the 15th anniversary of the Velvet Revolution, the National Memory Institute (ÚPN) published a portion of files maintained by the ŠtB, the communist-era secret service, on the Internet November 16.

Ján Langoš, the head of the ÚPN said November 15 that the main goal of publishing the files online was not revenge but rather reminding people "about the truth of the communist regime, so that the nation does not behave like an unaware Little Red Riding Hood and wander around a dark forest mistaking the wolf for the granny".

According to Langoš, "[The ÚPN] does not want to delve into personal details but rather publish documents that describe events that, from the point of view of contemporary rights in democratic countries, were crimes against humanity."

Tough road for Slovakia after 1989

After a period of revolutionary enthusiasm and high expectations, the difficult period of building a democracy arrived.

The unprecedented process of social, economic, and political transformation was accompanied by factory closures, massive unemployment, and political tumult, particularly in the mid-1990s when authoritative ex-PM Vladimír Mečiar led Slovakia away from integration with Western European countries.

But as the country got back on track in 1998, after PM Mikuláš Dzurinda rose to power, the road to western integration reopened, topped by EU and NATO entries this year.

According to Pavol Hrušov-ský, speaker of the Slovak Parliament, Slovakia is now a democratic country "where people have the opportunity to develop their personal potential and use the democratic process to influence the direction society is heading".

The Slovak Communist Party (KSS), which managed to get into the Slovak parliament in 2002 for the first time since the fall of communism, has a different view.

The KSS perceives the Velvet Revolution as an "anti-socialist coup" that has been working towards the "genocide of the Slovak citizen" for 15 years.

KSS chairman Jozef Ševc told a press conference November 15 that the current "capitalist democracy is increasingly taking on the shape of arrogant state authorities belittling citizens, the dominance of money over law, and the deepening of the abyss between the elected and the electors".

According to the Institute for Public Affairs' analyst Vašečka, the KSS is "a non-standard political party like those that exist in almost every country".

Vašečka thinks that the KSS is targeting "the losers of the [post-communist] transformation" and providing them with "excuses for their failure in the new system".

Whether the KSS can attract enough losers to make a difference is questionable. Its voter support is low according to regular opinion polls, and even its election to parliament in 2002 was a major surprise to most.

Whatever the future holds for the KSS, analyst Vašečka thinks that Slovakia's current problems as well as achievements are no different from any other country in transition.

"Despite the pain many Slovaks feel, it is actually characteristic of all citizens in transforming states," Vašečka said.