THE NIGHT of the Witches will be an event, according to the invitation, "when females party". It will be a night of singing, music, film, theatre, DJs, VJs (Video Jockeys), information, exhibitions and fun. But, just in case you were wondering, "men can relax - they are encouraged to come as well".
The nightlong party will roll out at Bratislava's Babylon Club November 26. 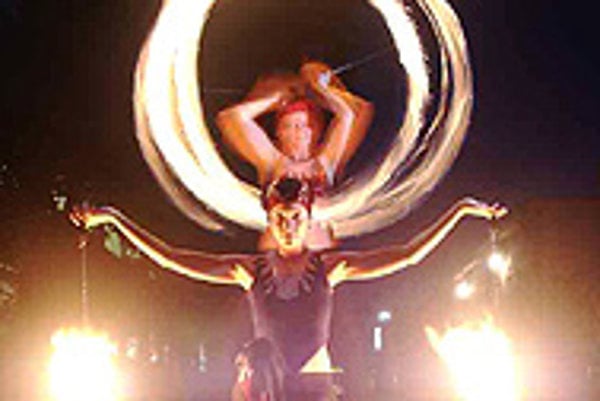 Font size:A-|A+0
THE NIGHT of the Witches will be an event, according to the invitation, "when females party". It will be a night of singing, music, film, theatre, DJs, VJs (Video Jockeys), information, exhibitions and fun. But, just in case you were wondering, "men can relax - they are encouraged to come as well".

The nightlong party will roll out at Bratislava's Babylon Club November 26. Its aim is to bring the issue of women's rights into the spotlight in a language comprehensible to all.

"The party is taking place to celebrate the International Day of the Elimination of Violence Against Women, when [organisations] in many countries hold public events promoting women's rights," said Zuzana Očenášová from the Slovak-Czech Women's Fund.

"We want to attract the attention of the public, mainly young people," she said, briefly explaining that women's rights means having enough information and the opportunity to make decisions about one's life.

The party is aimed at both women and men. According to Očenášová, gender stereotypes and restrictions are everybody's concern. "Women's rights are not only women's concern but an issue for the whole of society."

Men are helping with the preparation of the event and are among the artists who have worked on the event's visuals. But the stage will belong exclusively to women, supporting the concept of the party.

Czech singer, composer and violinist Iva Bittová will headline the event, accompanied by DJ Javas. Prague's quartet of conservatory graduates, Stillknox, inspired by the American industrial rocker Marilyn Manson, will bring its punk rock with gothic harmonies to the night. The two Slovak bands, The Answer, from Trnava, and Dollys, from Prešov, will add to the musical mix.

Films on women's rights to be screened during the night include My Feminism, a 1997 documentary by two Canadian feminist filmmakers, Dominique Cardona and Laurie Colbert, which focuses on various interpretations of what feminism means.

In the exhibition entitled I Menstruate This Month, artists show their understanding of this female phenomenon through photographs, drawings, and installations. One of the very few male artists present, Lukáš Kodoň, will exhibit his multi-media performance on Barbie.

The party is run by the Slovak-Czech Women's Fund, founded recently following changes in support for non-governmental organisations. The fund generates support from institutions and the public to help battle gender inequality.

According to the fund's statistics, women's wages are just 72 percent of men's, when assuming the same level of education. Twenty percent of women have been violently attacked by their male spouses and 82 percent think they are worse off than men.

The organisers of the party aim to attract mainly young people, as they are more open to destroying stereotypes.

"In many cases it is an intuitive approach; they feel that society has changed and they do not want to live the way their parents did. For that reason we want to inform them about what equality of opportunity means and that things that appear to be natural don't actually have to be that way," Očenášová said.

"For instance, a hundred years ago nobody thought it natural that women could vote, study or work."

The Night of Witches will run from Friday, November 26 at 19:00 till 4:00 the next morning. Tickets cost Sk199. Babylon Club Bratislava is on Karpatská 2. For more information visit www.noccarodejnic.sk.