Why did the Tatras fall?

IN THE AFTERMATH of the severe windstorm that flattened or damaged 24 thousand hectares of forestland in Slovakia’s Tatra Mountains, ecologists and environmentalists started speculating on why the forests blew down.
“At the core of the problem is global warming...”
“Agricultural policies ...”
“European drought...”
“Tree insects...” 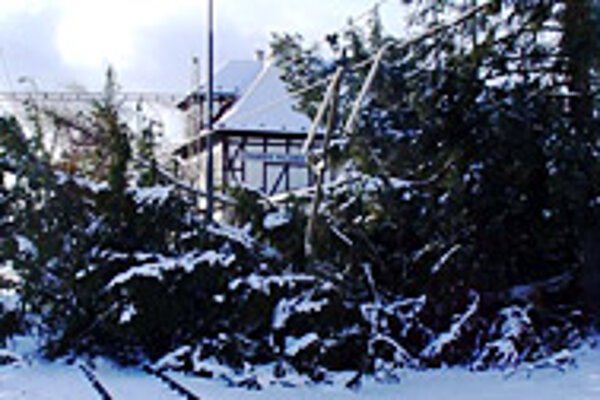 Font size:A-|A+0
IN THE AFTERMATH of the severe windstorm that flattened or damaged 24 thousand hectares of forestland in Slovakia’s Tatra Mountains, ecologists and environmentalists started speculating on why the forests blew down.

“At the core of the problem is global warming...”

No matter whom you listen to, however, experts agree on one thing: it is necessary to look at the event from a local as well as a global perspective and examine the factors that, combined together, made Slovakia’s forests so vulnerable. What is uncovered, say the experts, will help us avert a similar disaster in the future.

On the local level, ecologists and environmentalists say that Slovakia made some mistakes in its agriculture policies. Large areas of land were planted with trees of the same type - evergreens with notoriously shallow root systems. Planting happened at the same time, too, increasing the forests’ vulnerability to weather. For example, if a severe windstorm had hit woodlands with trees of different types and ages, the larger, older or more robust varieties would have protected the weaker ones.

The condition of the Tatras forests was further weakened by the infestation of tree insects. If the types of trees initially planted in the woodlands had been mixed, the forest would have enjoyed at least partial immunity.

Meanwhile, in order to protect the environment surrounding Tatras National Park, the government forbade anyone or any organisation from influencing the park’s woodlands. Everything from logging to replanting was banned. While these policies would have helped protect a natural forest environment, they were applied to artificially created woodlands - to disastrous effect.

Michal Kravčík, an environmentalist with People and Water, provided a global perspective of the situation.

“At the core of the problem is global warming caused by urbanisation and industrialisation of the world’s woodlands and forests,” he told The Slovak Spectator.

Kravčík estimates that around 250 million cubic metres of water “gets lost” in Slovakia per year. In other words, rainwater and snowmelt that would otherwise be sheltered and used by forests evaporates. Another 40 billion of cubic metres vanishes from Europe’s ecosystem each year.

Less water in our ecosystem means the earth’s temperature heats up. With pollutants damaging the ozone and the greenhouse affect trapping heat, the problem is amplified. The difference between water temperature in our oceans and on land increases.

Scientists say global warming necessarily results in unpredictable temperature fluctuations that in turn cause extreme weather events, such as hurricanes and windstorms.

“We can help stop global warming on the regional, national or even global level. Or we can find excuses and say that without the cooperation of countries worldwide, there is nothing we can do. I believe we can start now and make a difference,” said Kravčík.

Martina Babidová, an environmentalist working with Greenpeace, is in the Tatras to collect data for ongoing scientific work.

“To be honest, nothing could have prepared us for what we’ve seen here. We saw the broadcasted images on the public service Slovak Television, but those are nothing compared to the reality,” Babidová told The Slovak Spectator.

She restricted her gloomy diagnosis of the event to the wildlife. “We couldn’t find any animals. I’m sure most of them died,” she said.

Ecologists suspect that some animals managed to escape to neighbouring woods but those that were hibernating likely died without a chance for escape.

The public is getting used to hearing about extreme weather events. The news brings reports of hurricanes destroying pristine coastlines and shows pictures of shell-shocked people standing beside the tangled mess of what used to be their homes. But when disaster strikes at home, agricultural policies and global warming suddenly seem to take on an unexpected importance.

When speculation dies down, one hopes that the government will cooperate with ecologists to make appropriate plans to revitalise and repair our woods. Hopefully these policies will be supported by environmental legislation.

Kravčík is less hopeful, given the government’s track record. “Many citizen organisations, councils and private companies forwarded environment and water-saving schemes to the government for financing. The Agriculture, Labour and Environment Ministries refused them all,” Kravčík said.