LABOUR Minister Ľudovít Kaník wants to create conditions that help Slovaks increase their pensions. He wants a system liberated from state financing that not only lowers the public deficit but also increases the state’s reserves. As the pension reform system gets ready to go live January 1, 2005, Minister Kaník may see his hopes start to materialise.
The Slovak Spectator met with the Labour Minister to talk about the government’s pension reform system. 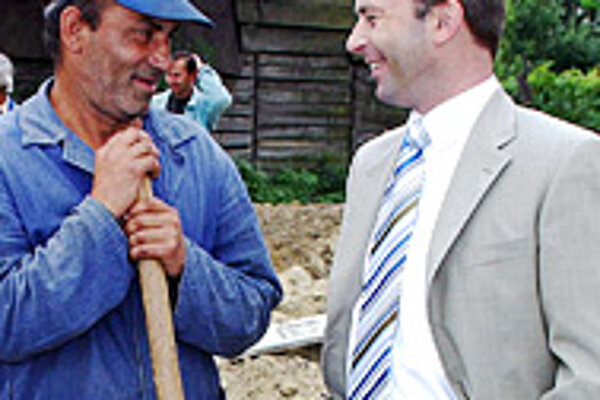 Font size:A-|A+0
LABOUR Minister Ľudovít Kaník wants to create conditions that help Slovaks increase their pensions. He wants a system liberated from state financing that not only lowers the public deficit but also increases the state’s reserves. As the pension reform system gets ready to go live January 1, 2005, Minister Kaník may see his hopes start to materialise.

The Slovak Spectator met with the Labour Minister to talk about the government’s pension reform system. The minister describes how the system will work, what inspired it and about other items on the Labour Ministry’s agenda, such as affirmative action and unemployment.

The Slovak Spectator (TSS): Please briefly introduce the Slovak pension reforms and describe the main goals of the new system.

Ľudovít Kaník (ĽK): The new pension system is built on three pillars. The first pillar is the pay-as-you-go system, which is now 100-percent insurance-based with disbursements that reflect the monthly amount paid into the account, and for what length of time. The second pillar involves private pension savings plans, whereby a client can redirect 50 percent of his pension (9 percent of his annual salary) into a private pension investment account. The remaining 9 percent will flow into the first pillar, the pay-as-you-go-system. The third pillar is a voluntary supplementary savings system, in which special insurance companies, banks, asset management companies and other financial institutions will provide supplementary savings products to interested citizens.

TSS: Where has Slovakia taken the inspiration for its pension reform system?

ĽK: The main inspiration came from the Chilean pension reform system, which was carried out 25 years ago and functions in different modifications in more than 25 countries around the world. In Europe, we are the ninth country to implement a version of the original Chilean system. Sweden was the first to modify the model, and then came Hungary, Poland, Bulgaria, Croatia, Estonia and Lithuania. However, among all the countries that have adopted the Chilean model, Slovakia has the strongest capitalisation [second] pillar, with 9 percent being the highest percentage of an annual salary redirected into it.

TSS: The Financial Market Office will be in charge of overseeing private pension administration companies. However, the state will not guarantee deposits made to the second pillar. How will the state protect the savings of citizens who decide to participate?

ĽK: There are several levels of protection. First, the law strictly defines what a pension administration company can do with its clients’ deposits. These laws define the types of transactions that are legal, where administration companies can invest and rules on the percentage of funds that can be invested. No investment can involve more than 3 percent of a fund, which guarantees high diversification in investment portfolios, a good protection against turbulence in financial markets.

Also, pension asset management companies cannot allocate funds. Only the depository, an independent bank, can issue investment orders. The bank is responsible for making sure orders are in line with the law. Asset management companies must disclose investments on a daily basis. That should guarantee harmony with the law. If by some set of strange and improbable circumstances, the law is broken and private pension accounts are damaged, the state will guarantee 100 percent of the investment.

TSS: What if fewer people join the second pillar? Would that hurt public finances?

ĽK:In the short term, the effect would be neutral. It could cause problems in the long run. There’s no reason to fear, though. I am confident the number of people in the second pillar will increase steadily. We do not expect 50 percent of the population to join immediately. It will be gradual.

ĽK: Some political parties wanted to require 80 percent of these assets invested on the Slovak capital market! I am glad that we reached a 30 percent compromise. I think that in a couple of years, more than 30 percent will be able to be invested on the Slovak market. As the economy dynamically grows, the return on such investments will become even more interesting. The current problem is that there are not sufficient investment opportunities on the Slovak market, but that will change. The demand for such investment opportunities will grow and could serve as a catalyst to revive the market.

I’d like to take this opportunity to call on all the companies with shares listed abroad to consider listing their shares on the Slovak capital market instead. On the Slovak market, they will be able to take advantage of funds controlled by our asset management companies.

TSS: The cabinet is in the middle of its term. Are you satisfied with the results? What are your plans for the next two years?

ĽK: The most important thing is to make sure that the whole reform flows smoothly. Still, a lot of work has to be done. There are legislative plans in the queue, for example, a law on illegal labour, a law on the social-legal protection of children and youth, and a law on long-term care, which applies to people with serious physical disabilities. However, we can say that the most complicated reforms have already been completed. Some of these reform steps are already bearing fruit in the form of decreases in unemployment and an influx of foreign investment.

TSS: Could a new government decisively change the new system? What if Robert Fico’s Smer party that opposed the pension reform rises to power in the 2006 elections?

ĽK: Each government has the right to make changes if the people give it a mandate. It is up to citizens to carefully consider what is good for them and what might hurt them. In more than 20 countries where the system has been functioning, none of the succeeding governments has cancelled the reform. It is not a political but rather an economic reform, which significantly improves the pension system and elevates the living standards of pensioners. It would be very insensitive and unfair to citizens if someone killed the reforms for political reasons.

TSS: The World Bank recommended that Slovakia reduce its payroll taxes instead of further lowering income taxes. You have promised to reduce payroll taxes. What impact would these reductions have on the pension system?

ĽK: Payroll tax reductions are among our objectives. We have already reduced these payments by 3.5 percent. No other country matches our reductions in this area. It does not make sense to say that instead of reducing taxes, payments to social insurance funds should be cut. We should try to lower both rates. Pension reform opens a door to reduce payroll taxes because the pressure on public finances will ease.

TSS: The Organization for Economic Cooperation and Development (OECD) claims the number of people without jobs in Slovakia has swelled since last year and that the rate now exceeds 18 percent.

ĽK: The reality is different. Unemployment has not increased in Slovakia. The OECD bases its findings on data collected by the statistical offices that comes from May, and today we have November.

The other factor is that the statistical office conducting the survey also includes students, pensioners and even women on maternity leave among its ranks of the unemployed. We stick very exactly to the records of the labour offices. This data says that last month, the unemployment rate for the first time ever sunk below 13 percent to reach 12.9 percent.

We are still in the process of healing big companies, and that has caused massive layoffs, for example, in the railways, the state forest management company and the telecommunications industry. Despite this, the market is still able to absorb job losses, and that is a success.

TSS: There were substantial fears about a massive migration of Slovak labour to the western European markets.

ĽK: The media generated many of these fears. I never shared these concerns myself. On the contrary, I claimed that no negative developments would occur. Some respected analysts even said that after EU entry the unemployment rate would climb in Slovakia. They were mistaken.

We have never perceived EU entry as way to rescue our labour market or redirect Slovak labour to other countries. We have always wanted to create favourable labour conditions in Slovakia. The experience of Great Britain, Sweden and Ireland - none of which restricted entry to their labour markets - show that Eastern Europeans have not attacked these markets. Actually, the countries that limited their labour markets are losing the opportunity to fill positions that are difficult to fill locally, which only serves to lower the productivity and growth of the gross domestic product.

TSS: Your ministry is against applying affirmative action in the labour department. Why?

ĽK: We are definitely against positive discrimination. I am convinced that it is a road paved by good intentions but that leads to hell. We have already experienced positive discrimination, although not specifically organised, towards the Roma community during the communist regime and shortly after its fall.

We can see the results in devastated housing and the dependency of portions of this community on state assistance. In my view, each person has rights and duties and we should take an equal approach to people. When we apply positive discrimination, we approach people unequally, and that leads to further dependency on the state.

The measures we have taken and that many evaluate as too tough have already brought about positive results in the Roma community. These measures help the Roma to break out from the trap of poverty. Thousands of people have walked this path and gained real jobs.

We want to apply policies that carry the message that “working pays”, and that a person who is employed must be secured a higher income than someone who lives on state support.

(Jana Liptáková contributed to the report.)