Of bells and baubles

VIRTUALLY any type of decoration seems to make it on to Christmas trees these days. Some more, some less, but the range is limitless.
"It's much richer than it was in the past. However, there was more joy in decorating the Christmas tree back then," said Helena Tkáčová, 64, a native of Eastern Slovakia.
"People owned less but they were happy while making the few decorations. Today you can buy anything and people naturally end up with many, various, and beautiful decorations, taking the whole affair for granted." 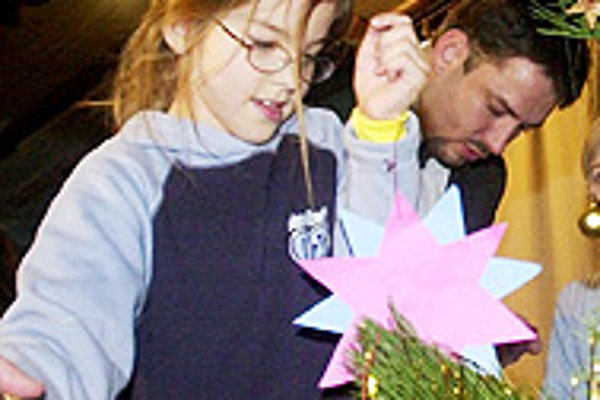 Font size:A-|A+0
VIRTUALLY any type of decoration seems to make it on to Christmas trees these days. Some more, some less, but the range is limitless.

"It's much richer than it was in the past. However, there was more joy in decorating the Christmas tree back then," said Helena Tkáčová, 64, a native of Eastern Slovakia.

"People owned less but they were happy while making the few decorations. Today you can buy anything and people naturally end up with many, various, and beautiful decorations, taking the whole affair for granted."

The custom of the Christmas tree as we know it today originated in Germany. It started to appear in Slovakia at the end of the 19th century, but it was only after World War II that the custom really caught on. First the tree was hung down from the ceiling, then people stood it on a table and later it was anchored into a base on the floor.

"At first, decoration was modest. With influences from the town breaking into the villages the ornamentation became richer. People began to decorate their trees with honey cakes, chains made from straw and colourful paper, pictures and waffles with Christian motifs, straw baskets and stars," said Viera Feglová, ethnographer.

Later, they gradually replaced the traditional ornaments with what the shops offered.

Tkáčová recalled the immediate post-war era, when there were no Christmas decorations in the shops. "We made everything ourselves. There was little available on the market".

Slovak grandmothers remember how, as children, they baked honey cakes and decorated them with intricate icing, or glued pictures of the holy family and colourful bits of paper with Christmas motifs on them. They dyed walnut shells in gold or silver, cut strips of coloured paper and stuck them together to create long chains.

Sometimes they cooked pieces of chocolate, or cut little squares out of wood to wrap them in coloured foil and shiny paper - today we have salónky and kolekcie as Christmas chocolate decorations.

The first glass Christmas balls that appeared on the market were very simple, much less decorated and of a smaller size than what you find today. During the communist era, the selection on the then Czechoslovak market was incomparably poor to what the local Christmas glass decoration producers exported.

"The state-controlled producers were told to focus on dollar incomes. So they exported the best of what they produced, leaving on the domestic market what did not attract the foreign customers," said Milan Kohout from Jablonex, the Czech producer of glass decoration, whose products were sold all over the former Czechoslovakia.

"Today, the producers no longer care whether they will be paid in dollars or crowns. Moreover, firms have increased in number tremendously."

According to Kohout, people in Europe today generally opt for simple forms of decoration, like balls, and they stress trendy colours, copying the trends in clothes. This year, Kohout says, is dictated by turquoise and brick-brown colours with a sparkly surface, or white-black and silver-black combinations. In America, customers emphasize shapes and forms of decorations, allowing greater extravagance.

"We can say that each year has its hit. In western countries some even buy a complete, decorated Christmas tree and after Christmas they throw it out even with the decorations. Then they get the new and modern one for the next holiday."

This is not the case in this part of Europe, Kohout assures us. People mostly keep the decorations they have inherited from generation to generation, refreshing them with new ones occasionally.

Tkáčová also keeps all the decorations that she has bought since she started decorating the annual Christmas tree with her family and uses almost all of them each year.

"Maybe I could change the style but I just don't feel like doing it."